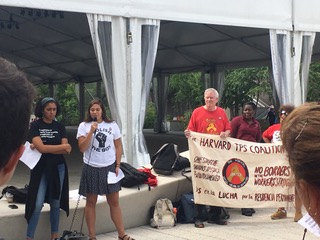 A federal judge temporarily blocked the Trump administration from deporting immigrants with Temporary Protected Status last Wednesday, giving respite to hundreds of thousands of people around the country and dozens of Harvard affiliates on campus who were facing imminent deportation.

TPS is a designation the U.S. Department of Homeland Security grants to certain foreign nationals who are unable to return to their country of citizenship due to unsafe circumstances like armed conflict or natural disaster.

TPS recipients can legally live and work in the U.S. and are immune from deportation. The status is temporary, but for several years presidential administrations have largely left the program alone, allowing recipients to continue residing legally in the US.

But Chen’s decision comes at a time when the Trump administration is taking action to phase out the status. The judge’s injunction however, took immediate effect, halting the deportation of an estimated 300,000 immigrants living in the United States who were facing deadlines to voluntarily depart the country or risk potential arrest and deportation.

Despite the recent changes, Julio A. Perez, a Harvard staff member with TPS, said he still fears being deported back to his home country of El Salvador. As a preliminary injunction, the ruling only offers a temporary reprieve until further judicial decisions are made or the Trump administration abandons its efforts to end the program.

“The judge’s decision is not the final solution to this problem because the fight is still not over until we get our permanent status to stay here,” Perez said.

Perez added that hundreds and thousands of lives are in danger — and that many in his position are afraid they may have to eventually return to their native countries from which they have “barely escaped catastrophe.”

“I’m scared for my family. I have a son who is 13 years old and I wonder what will happen if we get separated,” Perez said. “Children under 18 are obligated to live with their parents, and my son is a U.S. citizen too, but if they stop TPS then we might have to go back to El Salvador.”

Nevertheless, Perez remains optimistic and said he is grateful for the opportunity he has had to live in safety in the United States for 18 years.

“The ruling was such a nice breath like oxygen to my lungs, and I am confident that people with TPS should not be afraid because we are working hard in the community, but also nationwide, to raise our voices for permanent residency,” Perez said.

—Staff writer Sonia Kim can be reached at sonia.kim@thecrimson.com.