Harvard Affiliates Will Huddle With Bacow to Strategize About Trump, DACA 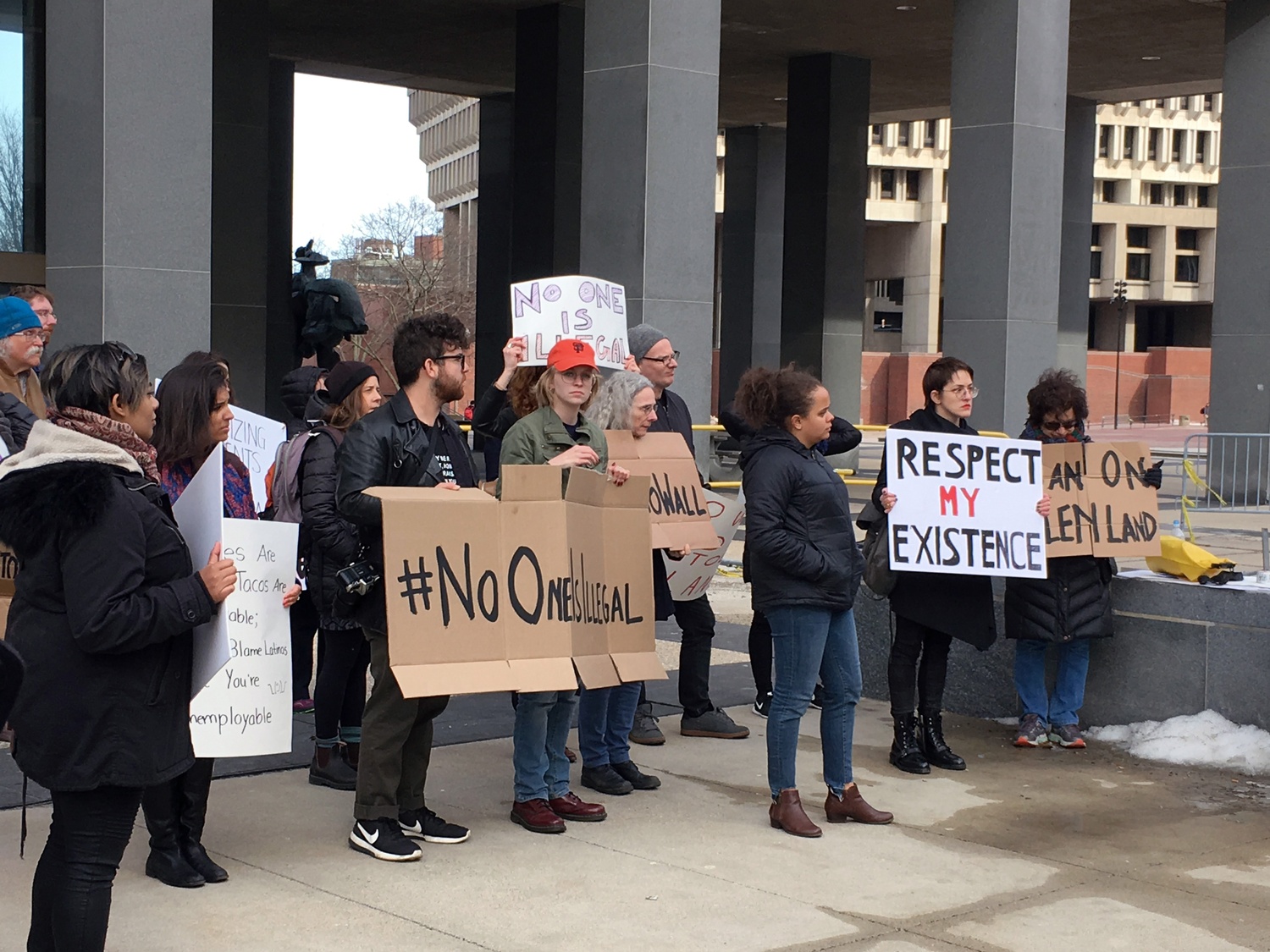 Harvard professors and affiliates protest in support of DACA/TPS in front of the JFK Building in Boston in March. By Timothy R. O'Meara
By Kristine E. Guillaume and Ruth A. Hailu, Crimson Staff Writers

Almost as soon as Harvard’s new president officially took office, concerned University affiliates reached out hoping to discuss another president — the one in Washington.

A group of faculty, students, and staff will huddle this fall with University President Lawrence S. Bacow, who assumed the post over the summer, to strategize about the ways Harvard can support those at the University affected by the Trump administration’s controversial policies on immigration.

Though an official date for the meeting has not been set, Bacow’s office proposed Oct. 1 as a potential date for the cohort to congregate, according to an email provided to The Crimson.

The planned discussion falls roughly a year after the Trump administration terminated Deferred Action for Childhood Arrivals, an Obama-era program that allows undocumented youth to live and work in the United States. Roughly 65 Harvard affiliates were undocumented in the 2017-2018 academic year.

Several court injunctions in the past year have compelled the Trump administration to continue processing DACA renewal applications — so for now, Harvard's DACA recipients can renew their status. The future of the program remains uncertain, though.

The upcoming meeting with Bacow also comes after Trump’s 2017 executive order limiting travel from seven predominantly Muslim countries, a ban that was upheld by the Supreme Court in June. That order caused at least four Harvard affiliates to be temporarily barred from the United States.

The coalition slated to meet with Bacow includes leaders of student groups such as UndocuAllies and Act on a Dream — an organization that advocates for immigrant rights — and staff and faculty members who have been active in pro-immigrant movements on campus.

Graduate School of Education Professor Roberto G. Gonzales, whose research focuses on immigration, said that — in early conversations — Bacow's administration has seemed “very eager” to hold the meeting. Gonzales said he and other faculty would like to consult Bacow on how Harvard can “increase support and protection” for students, faculty, and staff impacted by Trump-era immigration policies.

“Our students are arguably much more vulnerable in this new school year given some of the policy changes certainly around DACA and TPS, but also with the travel ban,” Gonzales said.

University spokesperson Melodie L. Jackson declined to comment directly on the meeting but wrote in an emailed statement that Bacow and Harvard are committed to protecting undocumented Harvard affiliates.

“President Bacow and Harvard remain deeply committed to supporting those in our community who have been impacted by changes in the federal government’s TPS, DACA and other immigration policies, and we will continue to make every effort to have our voice heard and to advocate for permanent legislative solutions to these challenging issues,” Jackson wrote in an emailed statement.

Harvard has already taken steps to advocate for its students affected by immigration reform.

Bacow spoke with lawmakers about immigration and DACA on a recent trip to D.C. and joined the Presidents’ Alliance on Higher Education and Immigration, Jackson wrote.

Bacow has also asked University General Counsel Robert W. Iuliano ’83 to coordinate the University’s efforts to support students and staff who are protected under DACA and TPS, according to Jackson.

The University employs a full-time time staff attorney at the Law School’s Harvard Immigration and Refugee Clinical Program who is tasked with helping students navigate uncertain territory in the era of Trump. Harvard officially appointed  Jason M. Corral to that position in Jan. 2017, two months after Trump’s election.

Before she stepped down in June, Bacow’s predecessor Drew G. Faust made fighting for DACA one of her top lobbying priorities. When the Trump administration announced its Sept. 2017 decision to end DACA, former Faust swiftly denounced the decision as “cruel.” She also wrote letters to Washington lawmakers and appeared on national television to speak in favor of DACA.

Bacow previously praised Faust’s advocacy efforts and said he, too, hopes to serve as a “strong voice” on the national stage.

Gonzales called Faust’s advocacy a “good start.” But he said there is more Harvard could do — he wants the University to offer mental health resources to students affected by Trump’s policies, add an additional staff attorney to the Law School clinic, and offer faculty with expertise in immigration a seat at the table when Harvard is deciding its approach to the ongoing challenges.

“We really hope that the president will not just maintain the existing structures that we were able to implement under President Faust, but hopefully expand upon them, and delve into them further, look at how they're working, how this could be improved, where more funding and resources could be allocated,” Villegas-McCubbin said.

This is not the first time Bacow has faced Harvard affiliates concerned about immigration reform. A day after he took office in July, a group of 30 staff, students, and faculty rallied in Harvard Yard to deliver a letter asking him to follow in Faust’s footsteps and advocate for permanent legal protections for undocumented individuals. The demonstration was organized by the Harvard TPS Coalition, a group of workers, students, and faculty that advocates for permanent residency for individuals with DACA or Temporary Protected Status — a legal designation given to individuals from certain countries who have fled armed conflict or natural disasters.

The TPS Coalition partnered with Act on a Dream to organize another rally held last week in the Science Center, at which a group of 75 Harvard affiliates protested the federal government’s termination of TPS — and again urged Bacow to action.

“We will continue to make every effort to have our voice heard and to advocate for permanent legislative solutions to these challenging issues,” Jackson wrote in a statement responding to the rally.

Activists are turning up the heat not just at Harvard, but across the nation. The Trump administration’s attempted rollback of protections for undocumented youth has sparked court battles, congressional debates about a permanent solution to immigration reform, and protests spanning the country.

Though the Trump administration initially gave Congress a March 5 deadline to pass a permanent solution for DACA or immigration reform, legislators made no progress over the summer. Gonzales said he does not expect lawmakers to make any moves until after the midterm elections this November.

“We won’t see congressional action on immigration until likely 2019,” he said. “What that means is that in the best case scenario, we have a program like DACA for another another year or so.”

In the meantime, DACA faces another potential threat from the Supreme Court. Texas and six other states brought a federal lawsuit meant to end DACA in May; in August, a conservative judge made a surprise ruling in favor of the Obama-era program, temporarily foiling the suit. But experts say it could come before the Supreme Court — and if the Court rules in favor of the seven states, it will be the end of DACA.

If DACA is rescinded, it will cause the “mass disenfranchisement” of the 800,000 undocumented youth currently protected under the program, Gonzales said.

In addition to the meeting with Bacow, both graduate and undergraduate student groups are looking to collaborate in the coming months and years as Trump winds up his first term and looks to a second.

“Act on a Dream is working in collaboration with other organizations, including at the grad school level and the workers unions, to sort of think about what are the broader issues, immigration issues that need to be addressed on this campus related to DACA, but also other things like TPS and workers’ rights,” Villegas-McCubbin said.

One of these organizations is UndocuAllies, an advocacy group formed in Spring 2017 at the Graduate School of Education that provides support for undocumented students and educates their peers on issues related to immigration. Ariana Aparicio Aguilar, the co-chair of UndocuAllies, said she, too, supports consolidating resources across campus.

"It would be nice in some way to integrate the legal team that we have and the resources that are available at Harvard," she said. "I think it would be a great reminder for the students who are still here and were here when the previous president was here, and for the new students to know, kind of like that reassurance that the new president also stands by them."

Act on a Dream advocacy co-chair Laura S. Veira-Ramirez ’20 said she hopes the new administration will look to reconsider policies that have been rejected in the past.

“We pushed for a sanctuary campus two years ago, but Drew Faust did not approve that, so that would be another possibility for under new leadership to reconsider, especially now that DACA has actually been rescinded,” she said.

Faust announced in Dec. 2016 that Harvard would not be a "sanctuary campus," citing concerns that the label could actually draw the federal government's attention to the University's undocumented students.

A previous version of this article misstated the name of Ariana Aparicio Aguilar. It has been updated.