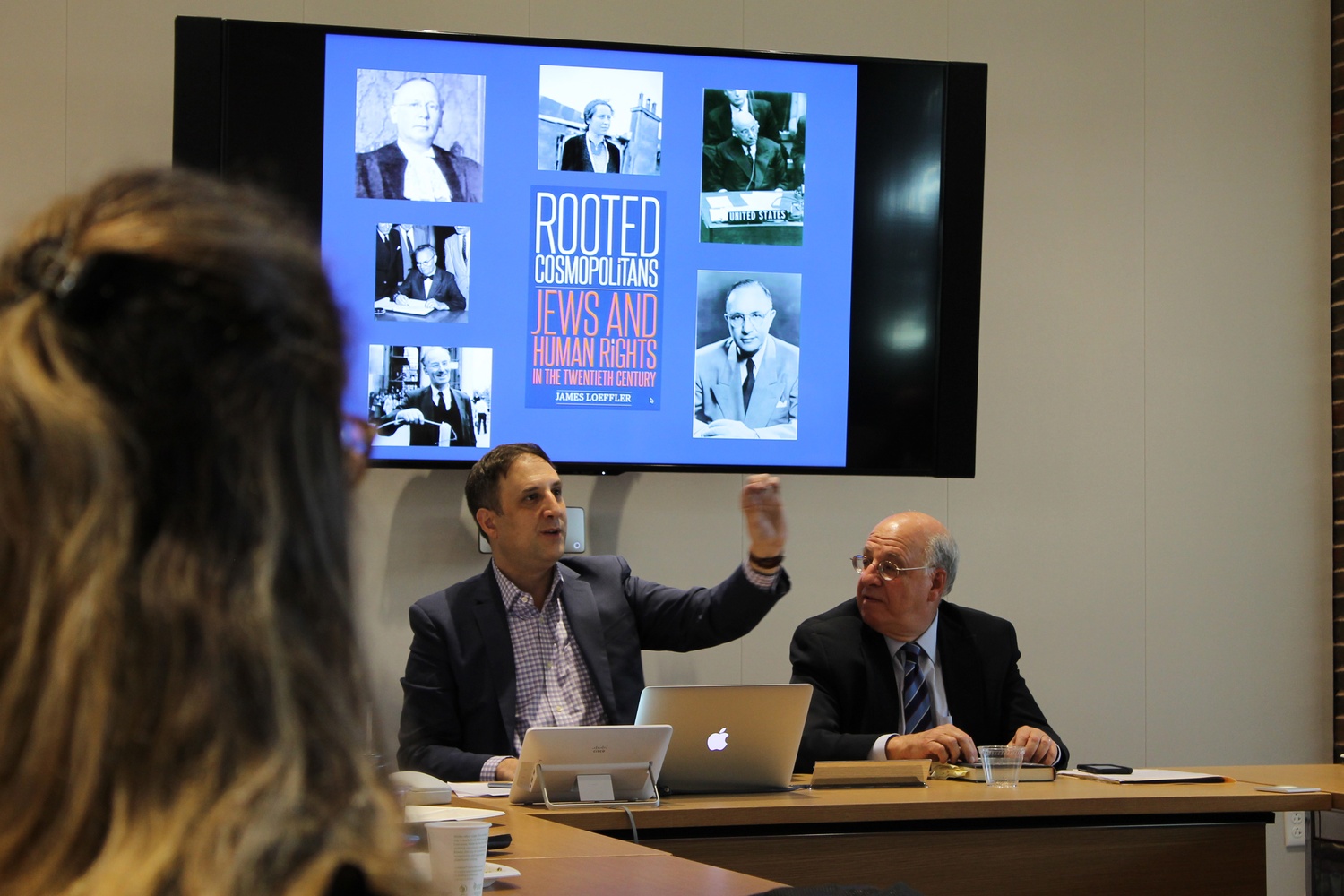 The Carr Center celebrated the 70th anniversary of the Universal Declaration of Human Rights by inviting James Loeffler and Mark Wolf to the Harvard Kennedy School to speak about human rights. By Chloe I. Yu
By Declan J. Knieriem, Contributing Writer

The Kennedy School held a discussion featuring University of Virginia Professor James B. Loeffler ’96 Wednesday in honor of the 70th anniversary of the Universal Declaration of Human Rights.

The Declaration, adopted by the United Nations General Assembly in 1948, articulates legal and moral principles for “fundamental human rights to be universally protected.” While legally non-binding, the document has been frequently cited as a basis for international agreements and domestic laws.

Wednesday’s discussion — which was hosted by the Carr Center for Human Rights Policy — focused on the history and modern significance of the document, as well as the evolution of international human rights recognition. The event was moderated by Mark L. Wolf, a senior judge on the District Court for Massachusetts and a senior fellow at the Carr Center.

The first portion of the event focused primarily on the history and drafting of the Universal Declaration of Human Rights. Loeffler discussed the role activists played in forgingboth a revolutionary human rights proclamation and the state of Israel.

Loeffler, who specializes in Jewish history, drew much of the talk’s material from his recently published book “Rooted Cosmopolitans: Jews and Human Rights in the Twentieth Century.” During the event, Loeffler referenced several significant figures he featured in the book includingHersch Z. Lauterpacht, a Polish lawyer and key advocate for the creation of international human rights laws.

“It turns out that many of the building blocks of human rights that we think of as emerging out of World War II, out of the Holocaust, out of genocide, actually have their roots in Eastern Europe,” Loeffler said. He added that Jewish activists and lawyers were among the first to push for establishing a legal framework on the subject of human rights after the war.

Loffler also spoke aboutpresent-day dilemmas confronting anti-corruption movements. Wolf, who has previously written on the subject of corruption in human rights, said he believes these issues continue to be relevant and pressing.

“We should be battling to and creating institutions to assure that [UDHR] are not hollow promises,” Wolf said. “But that requires a kind of political will to fight for ideals and to not let them be hijacked for improper purposes.”

“It is not ancient history. These are battles that always need to be fought,” he added.

Kennedy School Professor and Carr Center Director Mathias Risse, who attended the talk, said he thinks it is crucial to continue educating people about the current state of human rights in the world.

“I was really gratified by the turnout,” Risse said.

In his talk, Loeffler also emphasized the perpetual relevance of human rights discussions throughout history.

“Humans rights are our language of justice,” he said. “We use human rights to articulate our aspirations, our ethics, and our morals.”

Loeffler’s talk is among several other events the Carr Center will host this year centered on the significance of the Universal Declaration.