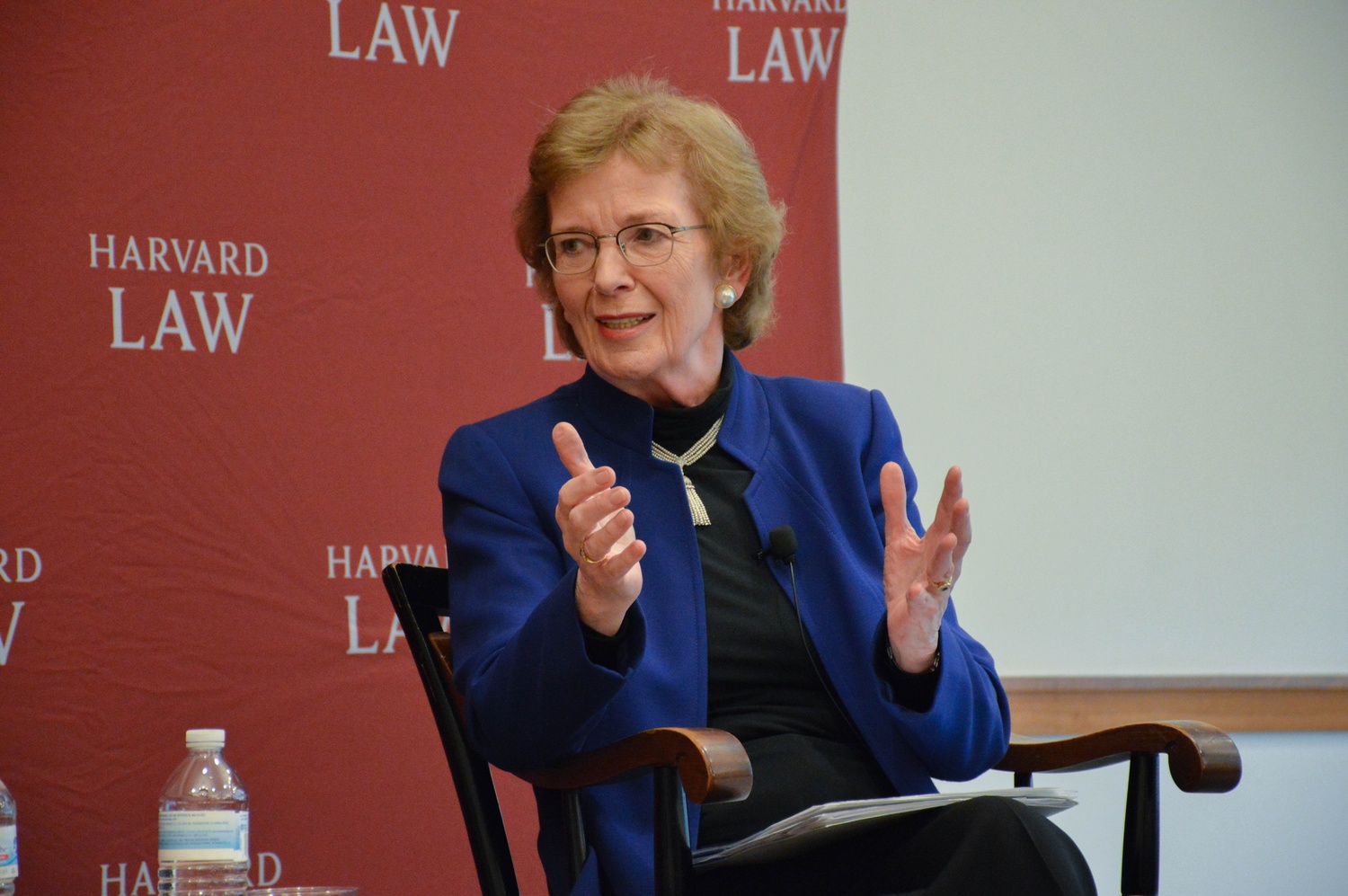 Former President of Ireland Mary T. W. Robinson speaks about climate justice at Harvard Law School on Thursday. Robinson, who has previously served as the United Nations High Commissioner for Human Rights, was appointed by U.N. Secretary-General Ban Ki-moon to be his Special Envoy on El Niño and Climate. By Megan M. Ross
By Monica E. Reichard, Contributing Writer

Mary T.W. Robinson, a former president of Ireland and current United Nations Special Envoy on El Niño and Climate, spoke about widespread human displacement due to climate change at a discussion at Harvard Law School on Thursday evening.

Law School Dean Martha L. Minow moderated the discussion in front of a packed audience. “There is nobody on earth who is more involved, who has done more on the subjects that bring us here today,” Minow said when introducing Robinson.

Robinson has previously served as the United Nations High Commissioner for Human Rights and as Special Envoy of the Secretary-General for Climate Change. She is also president of the Mary Robinson Foundation—Climate Justice.

During the conversation, Robinson emphasized the need for international policies promoting sustainability, especially given the increasing vulnerability of millions of people living close to sea level. The discussion included an examination of empirical data and observations regarding the effects of climate change, as well as the suggesting of proposals for effective policy responses.

Robinson focused on the connection between climate change and human rights in developing countries. She argued there should be more efficient contributions from the international community for those most affected by climate change.

“That’s the vulnerability of parts of the world, and unfortunately they happen oftentimes to be the poorest parts, which is a crime of justice,” she said. “These are the people who lose their livelihoods, who can’t get water for their families… and yet they don’t drive cars, they don’t have air conditioning, they don’t contribute.”

The audience reacted positively to Robinson, who received lengthy applause at the end of the discussion.

“The piece that really stood out to me was the need for us to most recognize the problem, but to think about it in a way that is proactive so that we are doing things that are active,” clinical professor of law Tyler R. Giannini said.

Renzo R. Guinto, a student at the School of Public Health, said that, as a physician, he is concerned about climate change partly due to the deleterious health effects of disaster-induced displacement.

“I come from the Phillipines, and so… I can very much relate to what she was talking about,” he said. “We are already seeing the health impact of climate change, especially to people who are displaced.”