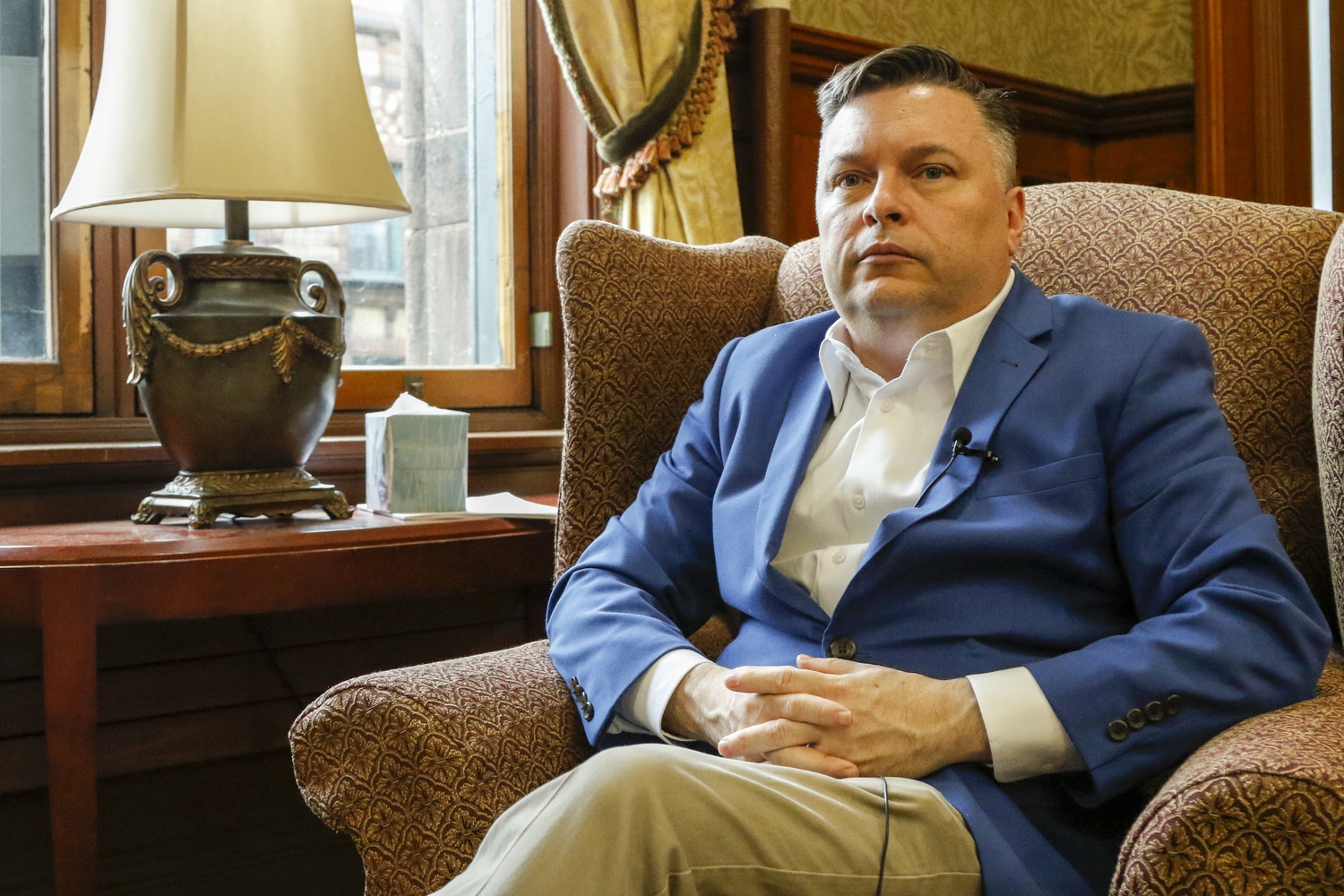 City councillors, Cambridge LGBTQ+ Commission researchers, and the mayor all spoke at the town hall. The goal of the meeting, though, was to hear from Cambridge residents themselves — and after the presentations, attendees were invited to participate in smaller discussion groups to suggest ways in which Cambridge could better serve its BGLTQ residents.

Despite Cambridge becoming the first municipality in the country to grant same-sex marriage licenses in 2004, McGovern noted that progress is “built on a shaky foundation” in light of recent political events. He referenced the confirmations of Supreme Court Justices in recent years who want to overturn same-sex marriage and other protections, as well as a November ballot question that could repeal a Massachusetts transgender anti-discrimination law.

“I am a heterosexual, white, cis-gender male,” McGovern added. “I have the quadruplets of privilege, so if I’m scared with how things stand, I can only imagine how folks whose rights are truly fragmented feel.”

The Cambridge LGBTQ+ Commission was established in 2004 following a town hall meeting discussion. The commission is comprised of around 20 volunteers who live in Cambridge. One of the many things the commission highlights is the importance of inclusion for BGLTQ youth in extracurricular activities.

John W. Gintell, who co-chairs the commission with Aren Stone, said he has been on the commission since its beginning and has witnessed a cultural shift around transgender rights.

Earlier this year, the LGBTQ+ Commission published a report on youth inclusion in out-of-school organizations. According to the report, which was discussed at Thursday’s town hall, 41 percent of the 155 after-school staff members surveyed said there are lesbian, gay, and bisexual youth participants in their program. Fifty-three percent — the majority — said they were “unsure,” and 6 percent reported no BGLTQ youth in their program.

In the report, 90 percent of respondents said they could describe at least one strategy to help create a “welcoming and respectful environment” for BGLTQ youth and their families.

The report encouraged out-of-school organizations to always strive for an inclusive atmosphere. One of the report’s recommendations was to assume their programs have BGLTQ participants, even if nobody has explicitly disclosed their sexual orientation. This disclosure — also known as “coming out” — is solely the right of that person when they feel comfortable, the report said.

The town hall event — by no coincidence — coincided with National Coming Out Day, which has been observed every Oct. 11 for the past 30 years. The Human Rights Campaign, a BGLTQ advocacy organization, highlighted the importance of individuals’ decisions to be open about their sexualities and of building a safe environment for people to do so.

Cambridge city officials are also working on initiatives that support BGLTQ residents of all ages. The City Council has “unanimously” passed resolutions expressing support for “Yes on 3” — a campaign urging Massachusetts residents to vote “yes” in the Nov. 2018 referendum in order to keep Massachusetts’s Transgender Anti-Discrimination Law in place, McGovern said.

At the town hall meeting, McGovern said this will be the first time in decades that “taking away a group’s rights will be put to the vote.”

Councillor E. Denise Simmons has been working on BGLTQ housing issues and Councillor Craig Kelley has worked on more inclusive BGLTQ policies in Cambridge Public Schools, according to McGovern.

“We’re trying to make sure we do things on different levels — some of the bigger issues like housing but also some of the more direct issues such as school policy and supporting the ballot question,” McGovern said.

Simmons noted the importance of the town meetings as a manifestation of democracy, especially in light of current initiatives by the White House administration that deviate from Cambridge’s values as “a city of tolerance, of diversity, of inclusivity.”

“History is for ours to recapture and for us to rewrite,” Simmons said in remarks during the town hall. “We have to dig ourselves from the margins and put us on the center, and it’s these opportunities, these town meetings that make it possible.”