Harvard, Students for Fair Admissions Do Battle Over Discrimination on Day One of Trial 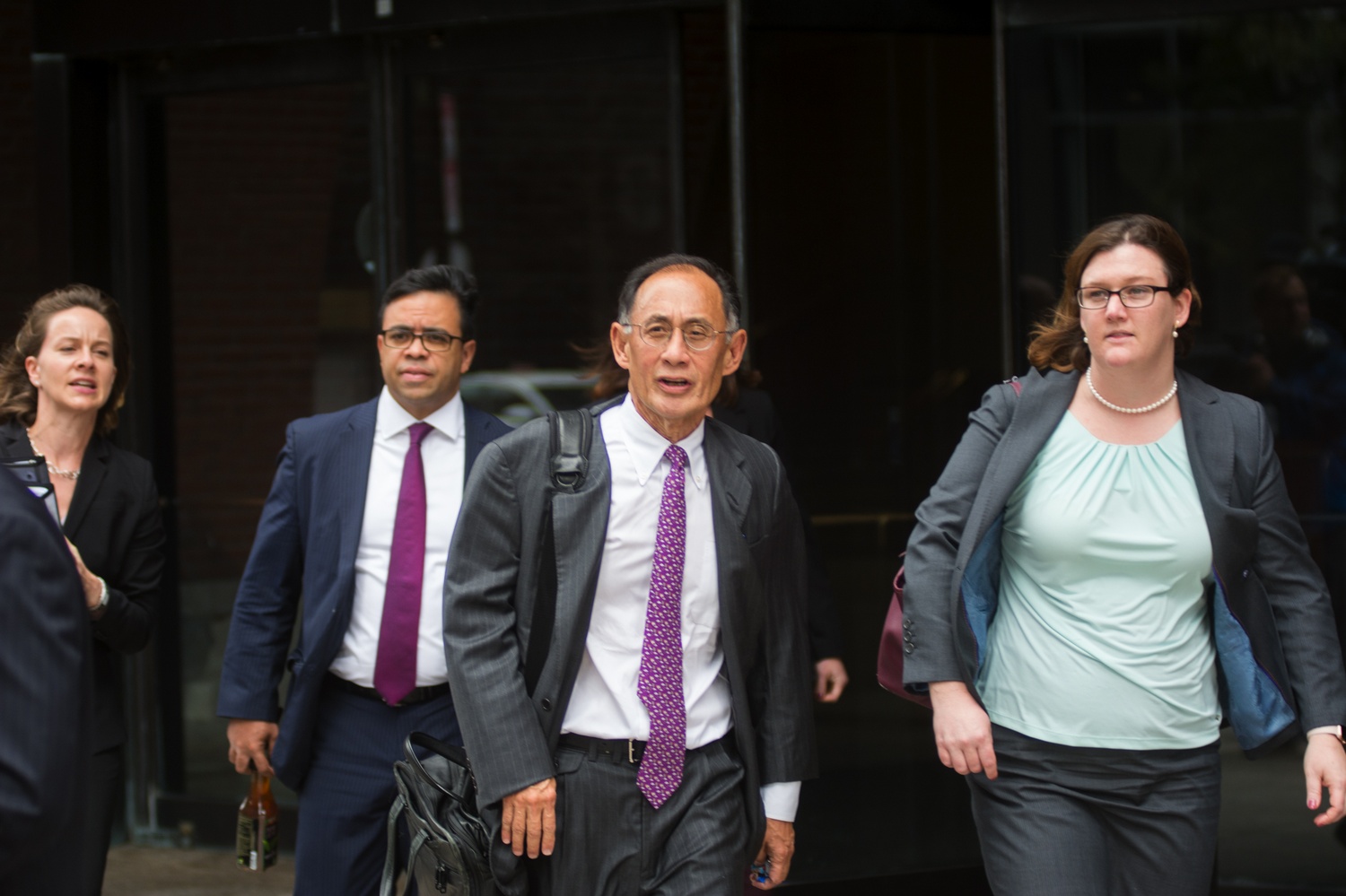 The opening day of the highly anticipated Harvard admissions trial drew hordes of spectators and reporters — enough people to fill two courtrooms and a jury assembly room. Proceedings stretched from 10 a.m. to 3 p.m. with a roughly 50-minute break for lunch around 1 p.m.

The first day went mostly as expected. Lawyers for both sides offered lengthy opening statements arguing their respective cases — Students for Fair Admissions asserted Harvard discriminates against Asian-American applicants, while the University vehemently defended its use of race in the admissions process. SFFA, an anti-affirmative action advocacy group, first sued Harvard over allegations of discrimination in 2014.

After the attorneys finished, Harvard’s Dean of Admissions and Financial Aid William R. Fitzsimmons '67 took the stand. He testified for over an hour, facing down a long string of largely technical questions from SFFA’s lawyers.

SFFA’s main line of questioning Monday centered around the group’s allegation that Asian-Americans must earn higher scores than Harvard hopefuls of other races to earn a coveted letter inviting them to apply to the College. Fitzsimmons did not deny the charges, but said Harvard crafts its outreach to high schoolers to ensure the school reaches “people from all backgrounds.”

The University’s top administrators — including former University President Drew G. Faust, Dean of the College Rakesh Khurana, and former Dean of the Faculty of Arts and Sciences Michael D. Smith — did not miss out on the action. Dressed in business formal attire, the trio sat together in the back left corner of the courtroom.

Faust, Khurana, and Smith watched silently as lawyers kicked off a trial that could decide the fate of affirmative action in the United States. The trial is expected to last for three weeks — but, no matter how Judge Allison D. Burroughs ultimately rules, the disappointed party will likely appeal and the case will likely make its way to a right-leaning Supreme Court.

Below, The Crimson breaks down the arguments and evidence introduced on Day One. 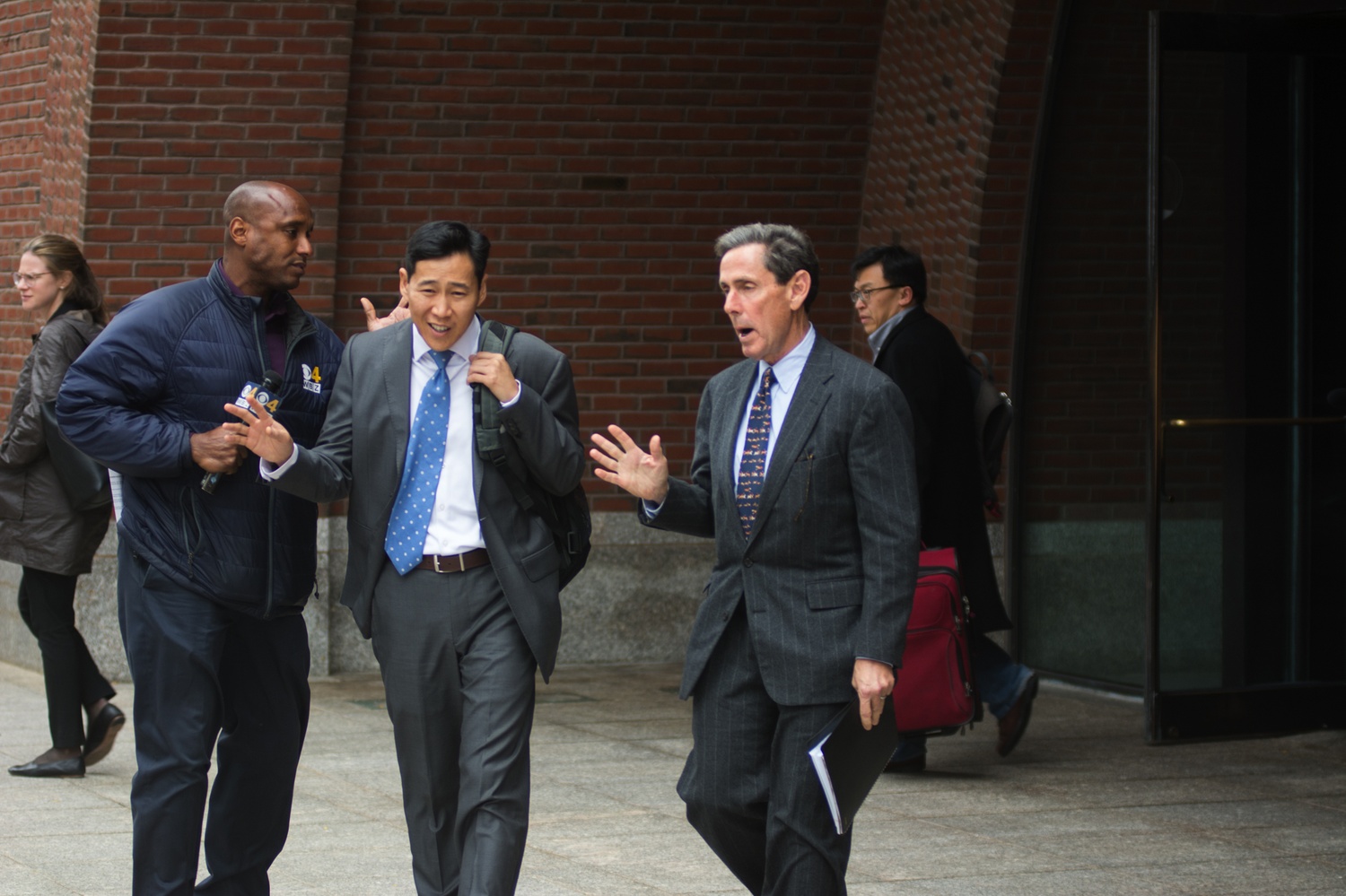 Legal strategist Edward Blum is the head of Students for Fair Admissions, the organization who originally brought the lawsuit against Harvard in 2014. By Caleb D. Schwartz
Advertisement

At 10 a.m., SFFA lawyer Mortara stepped to the podium to offer opening statements — and he did not mince words. “The evidence in this trial will show that Harvard intentionally discriminates against Asian-American applicants,” he said.

He complained that Fitzsimmons and Khurana had chosen to ignore an internal Harvard study that concluded the school’s admissions process disadvantages Asian-American applicants. Documents made public as part of the suit over the summer revealed that the University’s Office of Internal Research concluded in a series of confidential reports circulated among top administrators — including Fitzsimmons and Khurana — in 2013 that the College’s admissions process produces “negative effects” for Asian Americans. College officials took no serious action to address the study at the time.

“Instead, Dean Fitzsimmons and Harvard decided that the system was working as they intended,” Mortara said.

He also pointed to another summer revelation: that Asian-American applicants to Harvard receive substantially lower ratings for their personal traits as compared to students from other racial backgrounds.

“The personal rating is crucial to admission for Harvard,” Mortara said. “You have let the wolf of racial bias in through the front door.”

Just after 11 a.m., Lee replaced Mortara to deliver Harvard’s opening statement. He began by naming and waving at the administrators in the courtroom including Faust, Fitzsimmons, Khurana, and Smith (some of them waved back). Lee argued the University’s top brass has never participated in discrimination against applicants of any race.

Lee mostly focused on precedent in his roughly hour-long remarks. He frequently pointed to previous Supreme Court cases which he said established Harvard’s method as a legal way to consider race in the admissions process.

He dismissed the statistical analysis conducted by SFFA-employed economist Arcidiacono. Lee quoted former Federal Reserve Chair Janet L. Yellen and 17 other economists who, in a previous court filing, declared that analysis “simply not reliable” and its conclusions “implausible.”

“If you torture the data long enough, it will confess to anything,” Lee said.

Lee further defended Harvard’s race-conscious admissions by pointing to the Supreme Court’s opinion in the 2003 Grutter v. Bollinger case. That case, Lee said, set the precedent that it is “permissible” to pay “some attention” to the numbers when crafting an incoming class of Harvard freshmen — though it is still forbidden to use racial quotas.

Lee also defended Harvard’s use of “soft” — or non-academic — factors to distinguish among academically exceptional applicants. He noted that, for the Class of 2019, more than 8,100 applicants to the College boasted “perfect” grade point averages. The students were competing for fewer than 1,700 spots.

“Harvard never considers an applicant’s race to be a negative,” Lee said. “If it considers race, it’s always considered in a positive light.”

Near the close of his speech, Lee said a Harvard applicant’s status as Asian-American does not affect his or her chance of admission. It’s “not distinguishable from zero,” Lee said.

Fitzsimmons — in many ways the man of the moment — took the stand at 2 p.m. to face examination from SFFA lawyer John M. Hughes. Fitzsimmons has served as dean of admissions since 1986.

Citing internal Harvard admissions documents made public as part of the lawsuit, Hughes asserted that Asian-American students must score higher than high schoolers of other races on the PSAT and SAT in order to receive a special letter inviting them to apply to the College.

Hughes specifically asked Fitzsimmons to explain why a white student with a PSAT score of 1310 would receive a letter while an Asian male who had earned a 1370 would not.

Fitzsimmons did not contest Hughes’s charges. But he vehemently disputed the notion that this method of outreach constitutes racial discrimination. He said Harvard’s recruitment method “is just about reaching out to people of all backgrounds, especially those with disadvantaged economic backgrounds.”

“What we are trying to do with the students who are not Asians is to get a sense of what extent economic background might make a difference in their ability to score on the PSAT or SAT,” Fitzsimmons said. “It comes down to the stark economic differences.”

Fitzsimmons said he wants to advertise Harvard in areas like “the heartland of America” where the university is not necessarily “on anyone’s radars.” The University currently faces a political climate in the United States that is increasingly hostile to higher education; President Lawrence S. Bacow recently traveled to Pontiac, Mich. to convince locals Harvard — and higher learning more broadly — isn’t so bad.