One student's reviewed application, made public as part of the admissions lawsuit, sheds light on how the College assesses candidates — and on just what it takes to be Harvard material.
By Delano R. Franklin and Samuel W. Zwickel 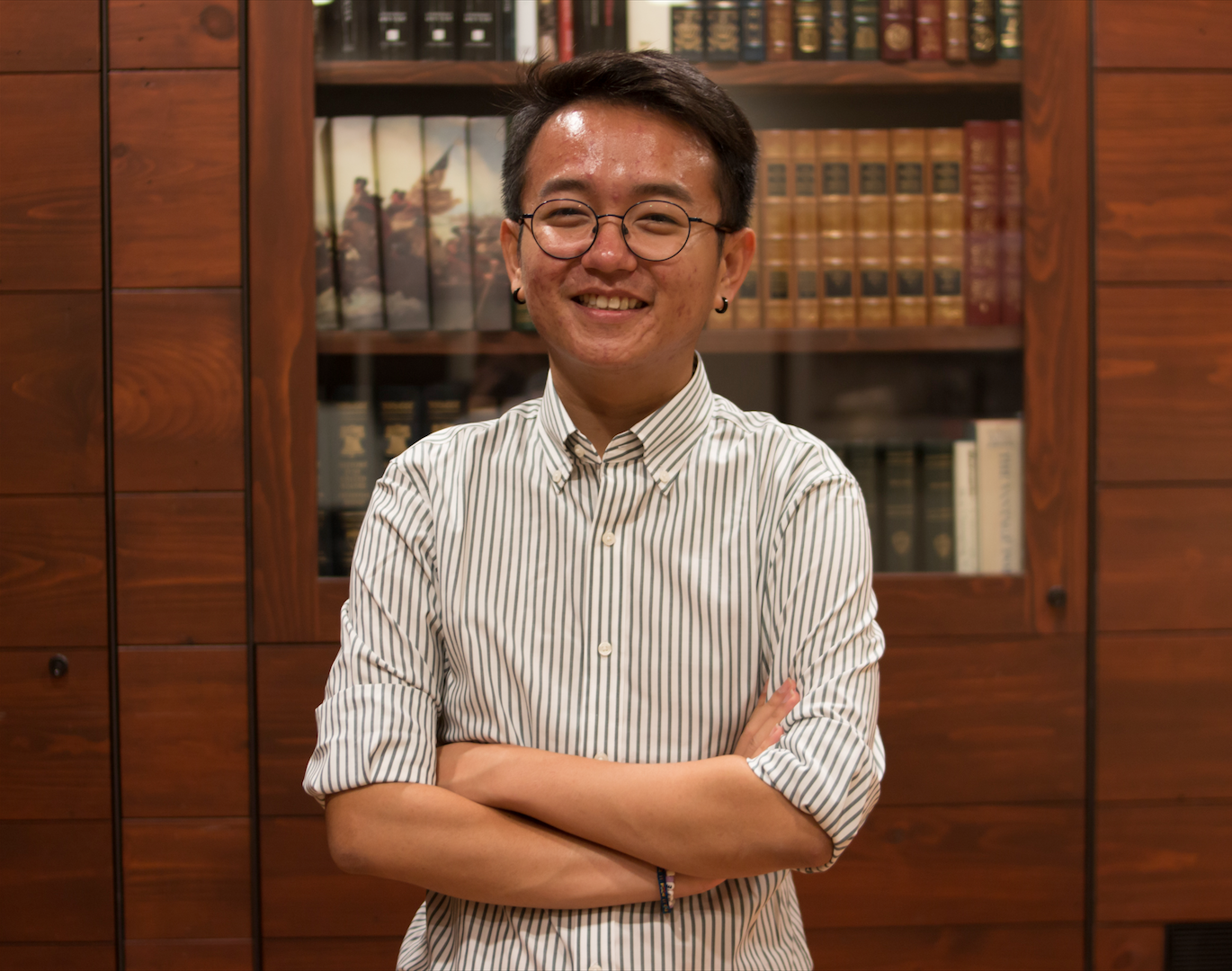 Thang Q. Diep '19 filed his marked-up Harvard application in court in an effort to help the University combat a lawsuit alleging it discriminates against Asian-American applicants. By Caleb D. Schwartz

“Clear admit; one to recruit,” one reviewer wrote of Harvard applicant Thang Q. Diep ’19. The reviewer then checked a box next to the words “Diamond in the rough.”

“Not a bad package when you put it all together,” a Harvard admissions officer wrote in Diep’s file.

It was early 2015, and an alumni interviewer and several employees in the College’s admissions office were evaluating the candidacy of Harvard hopeful Diep, who ultimately won acceptance to the College. In a document totaling at least four pages, the reviewers commented on Diep’s “perfect grades,” his “incredibly hard working” nature, and his impressive roll call of student group leadership positions.

All of the above fits the popular conception of a successful Harvard applicant. But the interviewer and the admissions officers also focused on more intangible qualities — Diep’s Vietnamese background and immigrant status, his modesty, why and how he spent a lot of his free time on YouTube and Tumblr, his “warm energy,” and his “truly unusual” openness to new ideas and new people.

Over the summer, Diep submitted portions of his unredacted admissions file in court in an effort to help the University combat a four-year-old lawsuit that alleges it discriminates against Asian-American applicants. As part of that suit, Harvard is defending against accusations — which surfaced in June — that it disproportionately gives Asian-American applicants like Diep poorer ratings for their personal traits.

The College has repeatedly denied both allegations. Diep, one of a group of Harvard students and alumni who are working with lawyers to aid the school in court, has said he does not believe Harvard’s admissions process is discriminatory.

“As an Asian American, I do not believe that Harvard’s race conscious admissions policy hurt me,” Diep wrote in a court declaration. “I disclosed my race and I did not have stellar grades, but I was accepted to Harvard most likely based on my personal statement, which reflected the diversity that I brought to campus.”

Diep’s filing is just one of tens of thousands of admissions-related documents and datasheets that Judge Allison D. Burroughs will review as she decides how to rule in a suit that could shape the fate of affirmative action in the United States. And Diep was just one of 37,305 high school students who applied to the College in 2015 — only 5.3 percent of whom were accepted.

Still, Diep’s marked-up application sheds some light on how College interviewers and admissions officers assess applicants — and on just what it takes to be Harvard material. Below, The Crimson annotates the application and analyzes what made Diep successful.

AN 'ABOVE AVERAGE PERSONAL APPEAL’

Reviewer comments on Diep’s file zeroed in on the student’s personality and behavior in social settings.

Diep’s papers — which his attorney attached as an exhibit in an August court filing — include comments from at least two admissions office employees as well as a lengthy evaluation from his alumni interviewer. Almost every applicant to Harvard interviews with an alumnus of the College as part of the admissions process.

Diep obtained his application by stopping by the registrar’s office to review it — something all Harvard students can do under the Family Educational Rights and Privacy Act — and snapping four photos, one per page, with his iPhone.

The interviewer ranked Diep on his academic, extracurricular, and character traits. Diep earned a “2-” overall and a “3+” for his “personal qualities.” A June 15 filing in the lawsuit revealed that Harvard rates applicants in a variety of categories from 1 to 6 — 1 being the highest and 6 being the lowest score. Admissions officers can also use a “+” or a “-” to enhance or reduce the ranking.

A screen grab of Diep's admissions file shows the alumni interviewer focused on the applicant's personality and "fun, casual nature." (Highlighting added by Crimson staff.) By The Crimson News Staff

The alumni interviewer devoted essay-length commentary to praise of Diep's personal qualities and outgoing, friendly nature. The interviewer wrote Diep showed an “above average personal appeal and character” and noted that he is “deeply social.”

“We met at a local coffee shop and twice during our interview, classmates (who was [sic] unaware he was on an interview) stopped by to say hello,” the interviewer wrote. “Though this may be an unfair judgement, it appeared to me that both students that came by were from different social circles.”

“It became apparent to me that Thang may be friends with a wide variety of students in his school,” the interviewer added.

The interviewer predicted Diep would be a “warm” friend, a “well-liked classmate” and an “outstanding” roommate at Harvard. The interviewer further appeared to prize Diep's lack of braggadocio, twice describing him as "modest" and once as "humble."

The admissions officers who scrutinized Diep’s file also focused on his character.

“Thang writes a thoughtful application through which he conveys a strong sense of himself,” one admissions officer wrote. “His school loves him and assures us he is an unusually caring individual who works very hard and has an ‘infectiously happy personality.’”

Another officer wrote that Diep has “done a good deal to push his own boundaries and explore new experiences.”

'PERFECT GRADES' AND AN SAT SCORE ‘ON THE LOWER END’

But the interviewer found Diep’s SAT score — listed as 2060 on the application — less showstopping. The interviewer wrote Diep’s score fell “on the lower end of the Harvard average.”

Diep’s alumni interviewer gave him a “3+” rating for his academics.

“He is modest about his academic achievements but it became clear throughout the interview that he sets very high standards for himself and strives for excellence,” the interviewer wrote. “He mentioned he wished his SAT score was higher, though this total score was way above average for most universities.”

Diep was president of the Key Club and a member of his high school's student government. (Highlighting added by Crimson staff.) By The Crimson News Staff

The interviewer was even more pleased with Diep’s commitments outside the classroom, giving him a “2” rating for his extracurriculars. In high school, Diep was president of the Key Club, an officer of his student government, a hospital volunteer, and an avid filmmaker, according to his application materials.

As part of his Harvard application, Diep penned an extracurricular-focused essay on his participation in a filmmaking summit. The alumni interviewer particularly mentioned Diep’s trip to Serbia to produce a short film about discrimination.

Previous court filings have shown that Harvard’s notion of an applicant that deserves a “2” ranking for his or her extracurricular accomplishments is “typically an applicant with significant school, and possibly regional accomplishments: for example, an applicant who was the student body president or captain of the debate team and the leader of multiple additional clubs.”

The reviewers made note of Diep’s first-generation, socioeconomic, and foreign-born status.

Diep, who was born in Vietnam, said in an interview that he is the child of two immigrant parents who did not attend college. His Common Application essay emphasized his “immigrant Vietnamese identity,” according to one admissions officer’s comments.

The interviewer twice mentioned that Diep's first language was not English and also wrote that Diep had "faced the challenge" of moving to the United States — though Diep seemed to have navigated the move without too much difficulty, the interviewer noted.

"I didn't pick up on any struggle at all. In fact, I didn't realize he was not born in the states until he mentioned it (there didn't seem to be any cultural disconnect, etc)," the interviewer wrote. "It is clearly not something he has let get in his way, and I got the sense very quickly that he has not made him any less social with his classmates [sic]."

One admissions officer called Diep “a well involved, first generation student from a modest background" and wrote he is "one to compare with [Harvard Financial Aid Initiative] info."  Another noted Harvard should “ponder” Diep “in HFAI context.”

The Harvard Financial Aid Initiative is the College’s signature financial aid program targeted toward low- and middle-income students. Families whose income is less than $65,000 per year pay nothing toward the cost of their child’s education at Harvard — most recent statistics estimate 20 percent of enrollees fall in this category. Approximately 70 percent of College students receive some form of aid. Harvard describes its application process as need-blind. The College’s financial aid office states “your financial need will not impede your chances of admission.”

So far, Diep is likely the only student to see a portion of his admissions file become public as part of the lawsuit. But that could change.

Harvard has forked over roughly 90,000 pages of internal admissions documents labeled "Confidential" or "Highly Confidential" — including other files like Diep’s and email correspondence among Harvard admissions officers — in the course of the case. Much of that information would likely become public if the suit, brought in Nov. 2014 by anti-affirmative action advocacy group Students for Fair Admissions, goes to trial this fall.

That trial — which experts have said will almost certainly take place — is set to kick off in a Boston courthouse on Oct. 15.