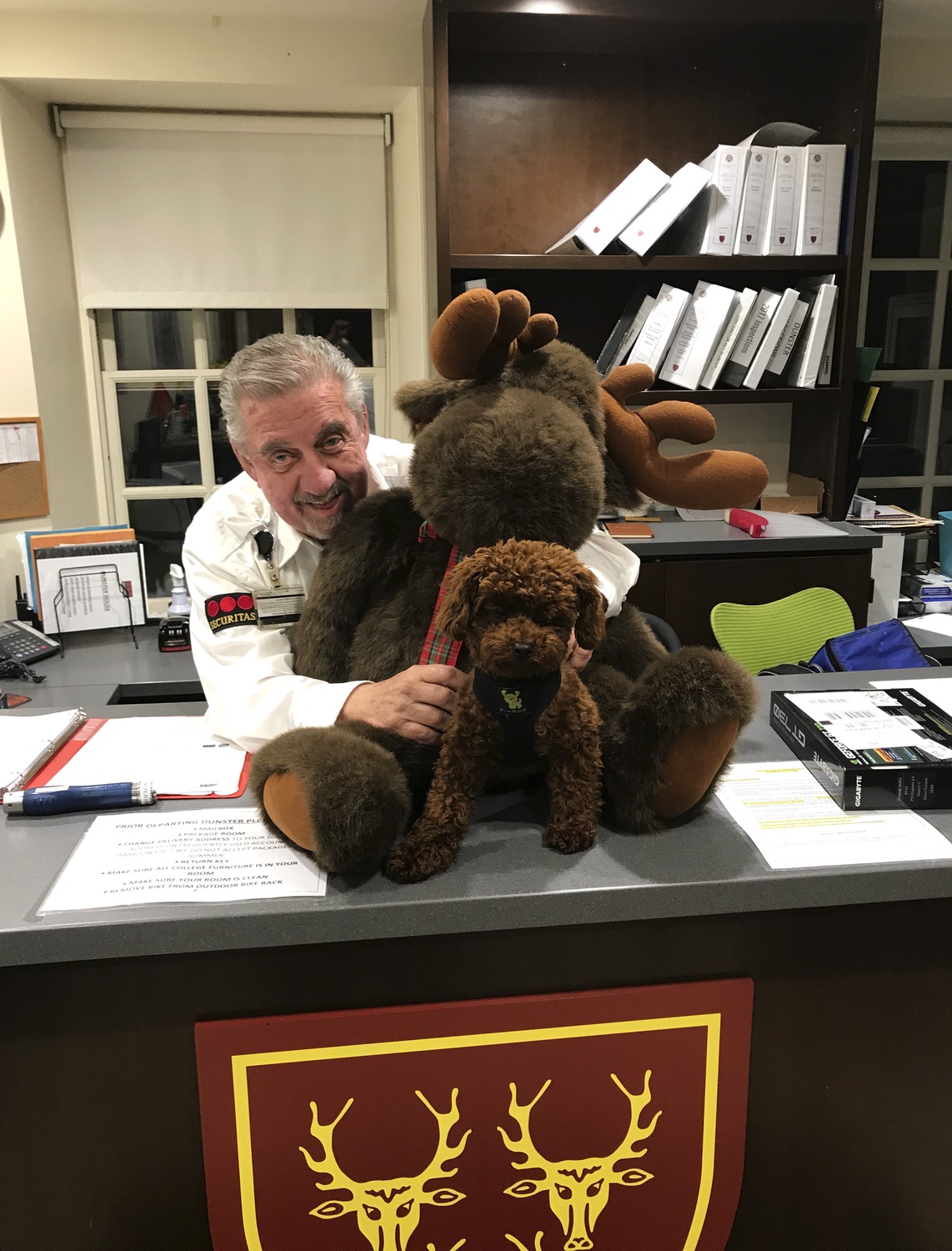 Dunster Security Guard John Pomeroy, who died earlier this month at the age of 74. By Courtesy of William Oliverio
By Ruth A. Hailu, Crimson Staff Writer

At every House on campus, from 4 p.m. to 8 a.m., a security guard is stationed at the main entrance. Many Harvard students will give their security guard a wave when they walk back into their building at night — but for Dunster students, John Pomeroy was more than just a security guard. Throughout his 14 years at Dunster, he became a fixture of the House. Those who knew him say he was a jokester, a wise confidant, a storyteller, and most of all, a true friend to all who stepped into his office.

“He conveyed to all a spirit of helpfulness that went well beyond the routine responsibilities of a security guard. Like many of his counterparts across campus, he became part of the community sharing his wisdom with Dunster students and tutors and giving them encouragement in their studies and activities,” former Dunster Faculty Dean Roger B. Porter wrote in an emailed statement.

Pomeroy died on Oct. 14 at the age of 74. He leaves behind his wife, three children, and eight grandchildren. Before working at Harvard as a security guard, he served in the United States Navy from 1962 to 1964 and owned several businesses.

Since 2004, Pomeroy's was the first face students would see, greeting them with a smile, as they walked into Dunster house. For many Dunster students, he was also the first person they met as a sophomore when they picked up their keys at the start of the school year.

“I just remember seeing this big smiling face and this really welcoming presence in the guard's office when I first walked in,” said Janani Krishnan-Jha ’20, a current student in Dunster House. “When he asked me questions about myself, I just felt like he really cared and that he really was listening to me.”

Not only was Pomeroy a welcoming and friendly face, but he would always make time for conversation. Students said he had a knack for names and would ask for updates on previous conversations. Too often students said they would lose track of time speaking with him.

“You couldn't go by the front desk, which is the main entrance in and out of Dunster, without stopping and talking to him for at least 10 minutes,” said Cheryl Chen, one of the Dunster faculty deans. “It always made me happy when I walked out and he was at his desk, so I'll miss that.”

Throughout his time at Dunster, Pomeroy made an extraordinary impact on its students and affiliates, according to those who knew him. He dedicated his life, in the House and beyond, to giving to others.

“John was a one of a kind person. There are a few people that you get to meet in your life that truly impact you and change you for the better in ways that you would never have imagined,” Timothy Kang ’18 said. “I want to say — not saying that I've lived the longest of lives — but I want to say that John is one of those people, definitely for me, and for so many people that pass through this house.”

“It was just remarkable how many people he could connect with. It wasn't like he was friends with just seniors or a certain group within the community. If you gave him the time and just started to talk to him, you could be in there for hours,” said Emma M. Orcutt ’19, Dunster House Committee chair.

Pomeroy was a storyteller, and a number of Dunster students remembered lessons they learned from him sharing experiences from his own life.

“One thing that I have remembered in this week following his passing and reflecting about his life is his tremendous capacity to love. I learned a lot about what true love is by hearing him talk about his wife,” Krishnan-Jha said.

Pomeroy was friendly to everyone he met regardless of their background.

Not only did he connect with students throughout their time as undergraduates, but he kept in touch with some as they furthered their careers and their educations.

Hussain met Pomeroy during a routine lockout in 2005, as a sophomore in Dunster house and became a close friend of Pomeroy’s for 13 years, keeping in regular contact with him well beyond his time at the College. Pomeroy was a trusted confidant for Hussain throughout his time at Columbia getting his Ph.D. — which John encouraged him to pursue — and became an essential part of his most formative years, according to Hussain. Hussain graduated with his Ph.D. this year and shared that moment with Pomeroy, something that he says he will cherish forever.

“I haven't met anybody like him. I've been at Harvard, at Columbia, I've worked at cool places in London, I've experienced a breadth of life, you could say, and there's good people out there,” said Hussain. “But I've never met anybody like John. Ever.”

Pomeroy also played an important role in the lives of other security guards at Harvard. He trained numerous new guards including his fellow Dunster guard, Theresa Gumes — whom he called his “Dunster wife” — and Adams guards William Oliverio and Evens Pierre.

“He was a good source of advice, and he would come to be a person to lean on and go to with anything, any kind of advice or things like that. It was a good relationship from the beginning,” Oliverio said.

At a wake held in Pomeroy’s honor on Oct. 18, his real family and his Dunster family finally got the chance to meet. While emotional for many, the wake was a chance for his co-workers and family members to share stories and memories.

Oliverio, who also attended the wake, said he was excited to see so many students there. An official Harvard shuttle brought the students and Dunster affiliates to the ceremony.

“It was a strong symbol of what John meant here at Harvard and Dunster House and I think he would have liked to have seen such a full force there,” Oliverio said. “Seeing that bus at the back of the parking lot was really an overwhelming show of presence.”

“The best way to celebrate him is to try to practice the kind of warmth towards others that was so much a part of his whole way of existing,” Sean D. Kelly, Dunster faculty dean said. “Every time we find ourselves doing that successfully I hope we'll think of that as a tribute to him and that's the way I think he'll live on in the house, one of the ways.”

“I miss him every day, as you walk past his office and you expect him to be there,” Orcutt said. “I hope people remember that he was such an incredible figure for this house. He was not only someone that kept you safe and looked out for you, but someone who made it feel like home, really for me, made Harvard finally feel like home.”