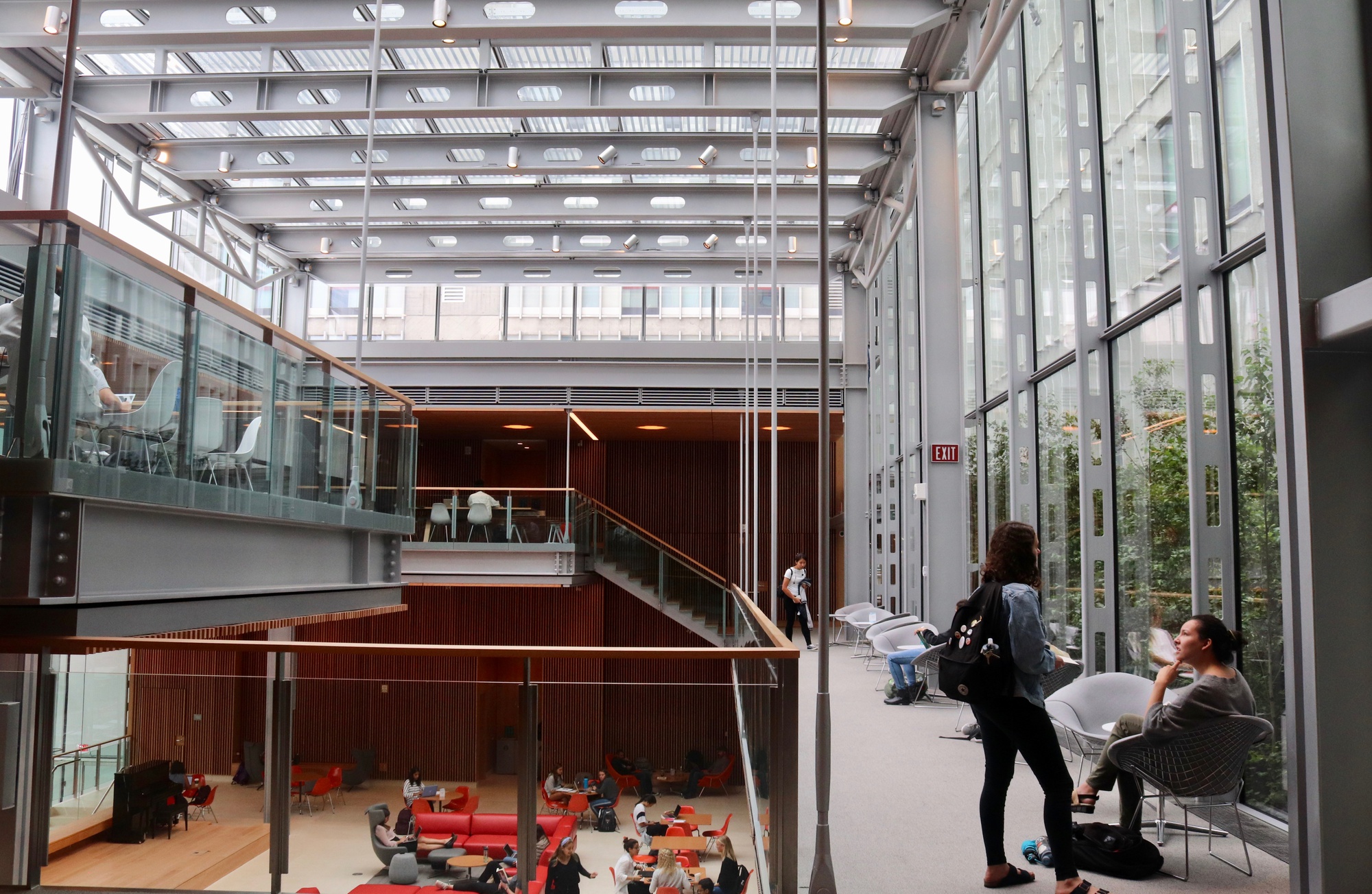 The common area of Smith Campus Center where the students of Harvard College gather.
Advertisement
Advertisement

As I looked directly at Farkas Hall through a glass window the size of a movie screen, I felt like I was sitting on the inside of an iPhone.
By Jensen E. Davis

When I first visited the Smith Campus Center three weeks ago, I settled into one of the orange, mock-papasan chairs on the second floor right above Pavement Coffee. Maybe it’s because I’m shorter than the average Harvard student (clocking in at 5 feet and one-and-three-quarters of an inch), but leaning back into the orange sphere was like retreating into a plush, Sunny D-colored cave. I had planned to finish some readings for a for class but the chair was so comfortable that I couldn’t. I lounged.

I looked at Massachusetts Avenue through the wall-sized window in front of me. I had a clear view from the T stop to the campus exit by Cafe Gato Rojo and all the way over to Clover. I thought I saw a professor I really admire drinking a grande Starbucks beverage, which I found remarkable because he seems too serious a person to have read the gratuitous Frappuccino flavors off the Starbucks menu. I looked again and realized it was a different, nicely dressed man rushing to campus. I wondered if I’d see my roommate running to class (he was still asleep by the time I left our room in the Quad, even though he had class in 30 minutes).

As I mindlessly watched people walk to and from campus, a friend texted me asking what I was up to. “Looking at Mass Ave,” I responded blandly as I surveyed people two stories below me, like a Greek god or a security camera incarnate.

After checking my texts and then, since I was already scrolling through my phone, checking Twitter and Instagram, I couldn’t stop thinking about my seminar from the day before, in which we talked about Facebook and Instagram data collection. Suddenly, I thought to myself, “Ohmygod, I’m watching people do mundane things without them knowing just like Facebook and Instagram watch me do virtual mundane things without me knowing. I am accidentally collecting people’s data!”

Shortly after, I left to attend class. But my thoughts strayed back to the Smith Center. Was my theory just a product of too much coffee? Or maybe my tabloid habit had rewired my brain to produce salacious headlines? I went back to the building the next day to find out.
Though my intention was to investigate how the layout of the Smith Center compels people to essentially spy on other people, I totally forgot that people could see me from inside. When I arrived outside the Mass Ave entrance, engrossed in my phone, I paused outside to scroll through Twitter and stretch my mouth to see if my lips were chapped enough to crack. Then, I looked up at Smith. Though I could barely see through the mirrored reflection of the trees and the brick buildings across the street, I discerned the general outline of the people inside (who had a clear view of me grimacing maniacally at my phone). Then I remembered why I came: because I believed that anyone could watch random people do private and or revealing things on the street from inside Smith.

I walked inside and went to the second floor, to the side facing Holyoke Street. I sat in a chair the same color as the mini-cave, but this one was rectangular and permanently reclined at a 30 degree angle.

As I looked directly at Farkas Hall through a glass window the size of a movie screen, I felt like I was sitting on the inside of an iPhone. I don’t know what the inside of an iPhone looks like, but the Smith Center feels like what I imagine it would be. It’s very cold, presumably to ensure the things inside remain alert. It is eerily clean and has wide pathways so people, or electronic signals, can move quickly and freely around the space. There are lots of large metal things whose purpose remains opaque to me.

Obviously iPhones don’t have tiny people inside them pulling levers and carrying data to various parts of the phone. But, to be honest, I don’t know what the inside of an iPhone looks like or how Apple products even work. As far as I’m concerned, it is just tiny people carrying around tiny data — maybe tiny wire baskets full of ones and zeros. And I felt like one of those tiny people as I watched a guy in a grey hoodie enter Farkas Hall. I collected his location data in my head without him knowing. I could, without even wanting to, see a guy wearing gym shorts (even though it was 60 degrees outside!) indulge in a cheese-and-egg Clover breakfast sandwich, like I was the Foursquare or Yelp app. I could see a guy in a plaid shirt run towards campus because he was, presumably, late to class. Like Facebook, I could try and sell him a Monster energy drink because I was, without his awareness, gleaning the most inane details of his routine.

Looking straight ahead in the Smith Center means watching people walk down Holyoke. But the layout of the building makes it seem natural, like it’s my default gaze. In fact, from two floors up, the street looks like it’s in Google Earth viewing mode. It’s the same way Mark Zuckerberg normalized Facebook data collection at his Senate hearing: “If you’re logged into Facebook and visit a website with the Like button, your browser sends us information about your visit.”

After 20 minutes, I had to leave Smith to go to class. Later that day, I walked past the building and didn’t think about whether I was being watched. It’s like when I’m on my phone — I never seem to remember that something or someone may be looking through my Google searches and Facebook chats.