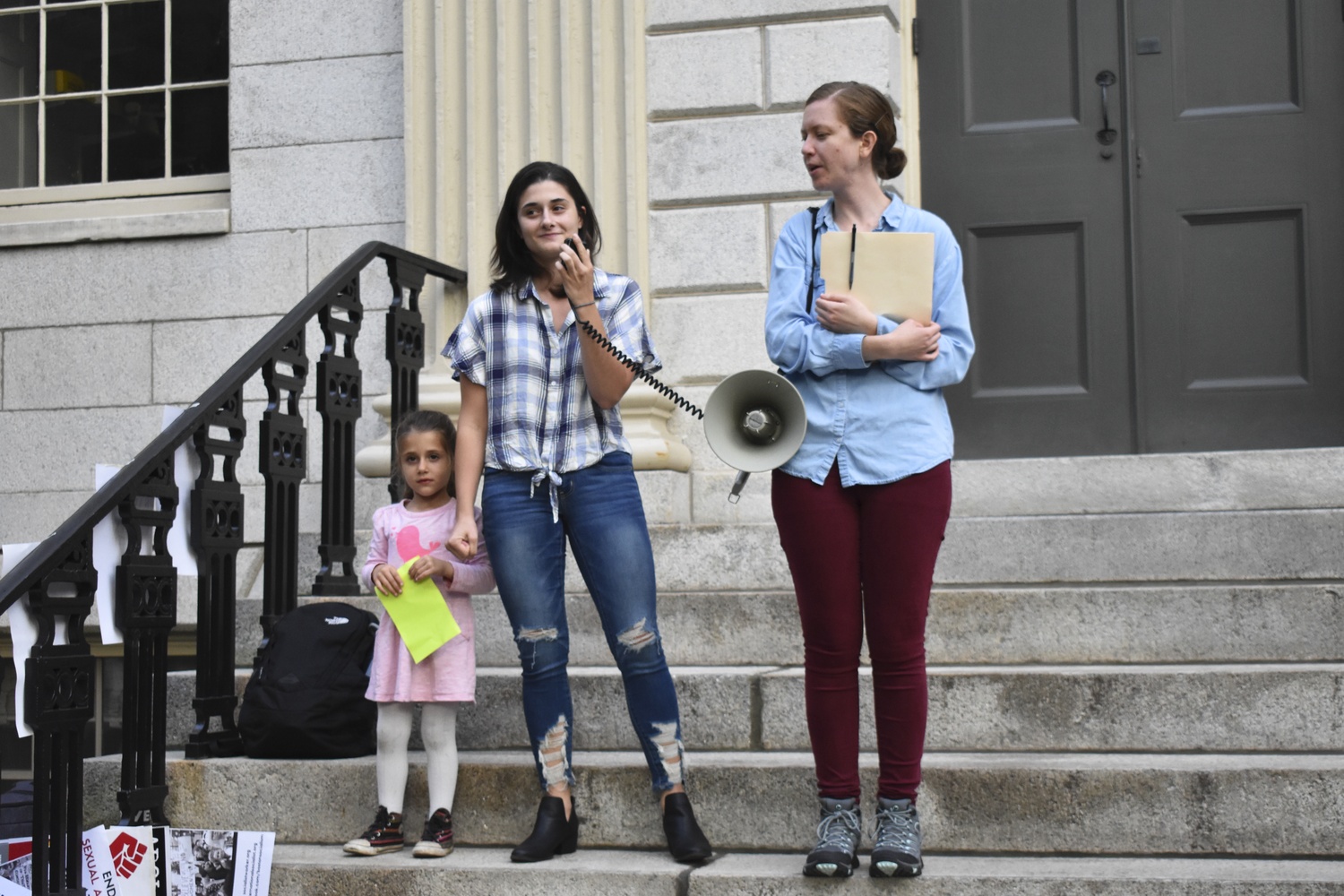 The Harvard International Socialists held a rally against the appointment of Brett M. Kavanaugh to the Supreme Court Thursday afternoon in front of the John Harvard Statue. By Amanda M. DiMartini
By Molly C. McCafferty, Crimson Staff Writer

Lofting signs and bellowing chants, members of the Harvard International Socialists rallied in Harvard Yard Thursday afternoon to protest the nomination of Brett M. Kavanaugh to the Supreme Court — continuing a string of demonstrations against the judge at Harvard over the past week.

The anti-Kavanaugh “speak out” was part of a nationwide day of action organized to oppose the embattled nominee.

The rally was the Harvard Socialists’ second event protesting Kavanaugh’s nomination; last week, around 35 members of the group rallied in the same location. Sasha E. Scott — a Harvard Socialists member who organized Thursday’s rally — said the group chose to demonstrate again to make sure Harvard affiliates had a way to participate in the nationwide action.

“We wanted to, in solidarity with all the people who are protesting across the country, give people an opportunity to protest here at Harvard, too,” Scott said.

President Donald Trump nominated Kavanaugh in July to fill the Supreme Court seat left vacant by the retirement of Justice Anthony Kennedy. The judge’s confirmation seemed all but certain until roughly three weeks ago, when women began to come forward with allegations that he had sexually assaulted them decades ago.

First, Christine Blasey Ford told the Washington Post that Kavanaugh had forced her onto a bed, pressed his body to hers, and tried to take off her clothes at a party the two attended in the 1980s, when both were enrolled in private D.C.-area high schools. Just a few days later, another woman — Deborah Ramirez — told the New Yorker that Kavanaugh had exposed himself and pushed his penis in her face at a party both attended while students at Yale. Then, a third woman, Julie Swetnick, said in a sworn affidavit that Kavanaugh was present while a group of teenage boys drugged and raped her at a D.C.-area party in 1982.

Kavanaugh has repeatedly and unequivocally denied all three allegations in the press and in a high-stakes and nationally televised hearing last week. The F.B.I. concluded an investigation into the allegations this week, and senators plan to vote on Kavanaugh’s confirmation on Friday or Saturday. 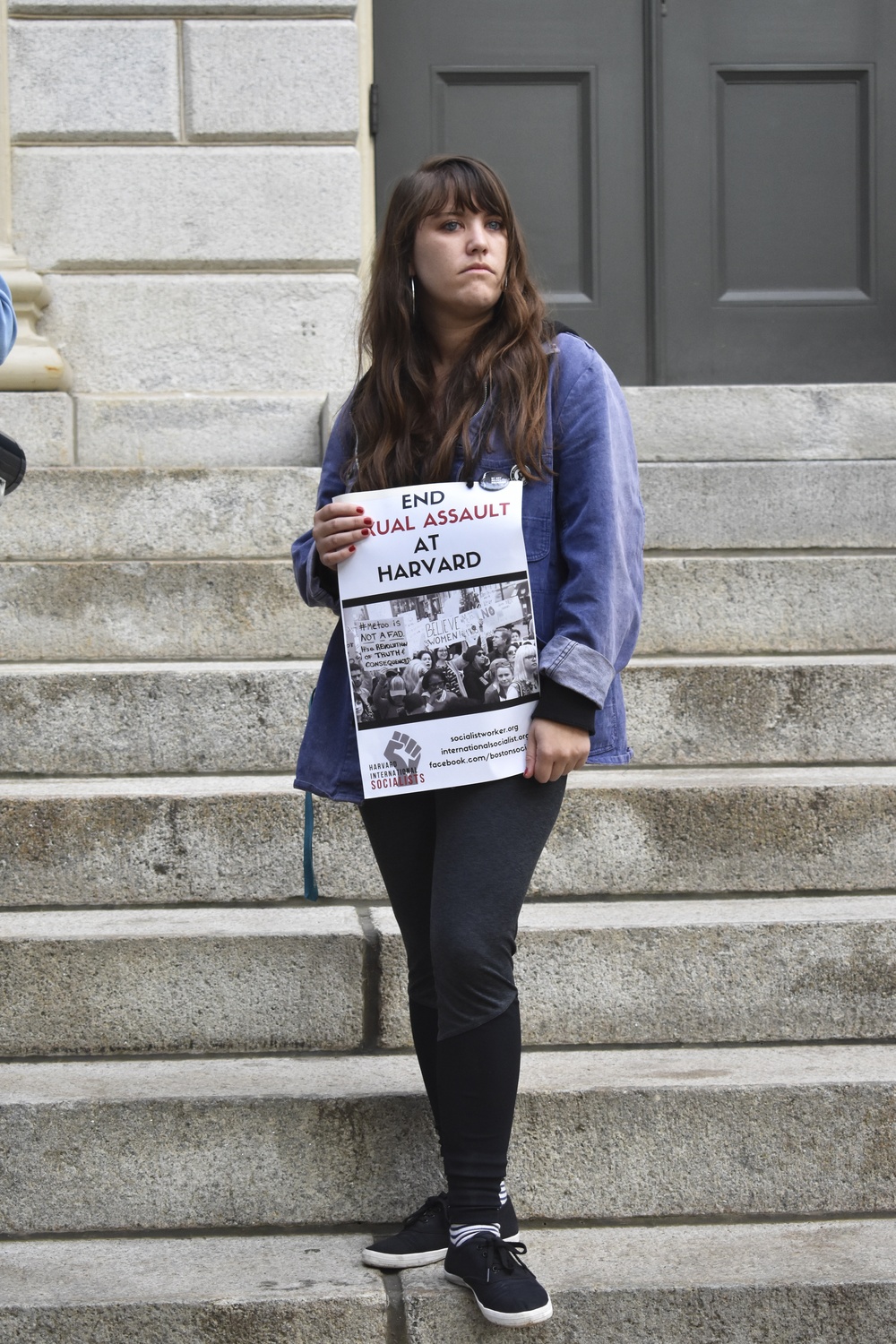 The Harvard International Socialists held a rally against the appointment of Brett M. Kavanaugh to the Supreme Court Thursday afternoon in front of the John Harvard Statue. By Amanda M. DiMartini

At the Harvard rally Thursday, around 100 people crowded around the steps of University Hall to listen to students and Boston-area locals give speeches and lead chants through a megaphone. Some onlookers shook noisemakers and banged a tambourine. Speakers often competed with the sounds of rehearsals for University President Lawrence S. Bacow’s upcoming inauguration.

While Scott railed against the “vile racism, sexism, and transphobia” she believes politicians have displayed during Kavanaugh’s confirmation process, the Harvard-Radcliffe Collegium Musicum practiced its rendition of “America the Beautiful” for the inauguration. The song filtered over the protest via speakers set up throughout the Yard.

Kavanaugh has taught at Harvard Law School for nearly a decade. After weeks of student outcry over his continued employment, The Crimson reported on Monday that he will not return to teach his usual course at the Law School, a three-week-long course held in January titled “The Supreme Court Since 2005.” On Tuesday, University President Lawrence S. Bacow confirmed that Kavanaugh decided on his own to leave his position.

Law School student Samantha E. Rodriguez said she believes the pressure that students have been placing on Kavanaugh contributed to his decision to depart HLS.

“It was the vast number of emails that he was getting, the calls he was getting — from not only folks that go to the school, from people all over the country,” Rodriguez said. “They’re outraged.”

“I think it exactly, for me, really shows the importance of really organizing and making our voices heard,” she added.