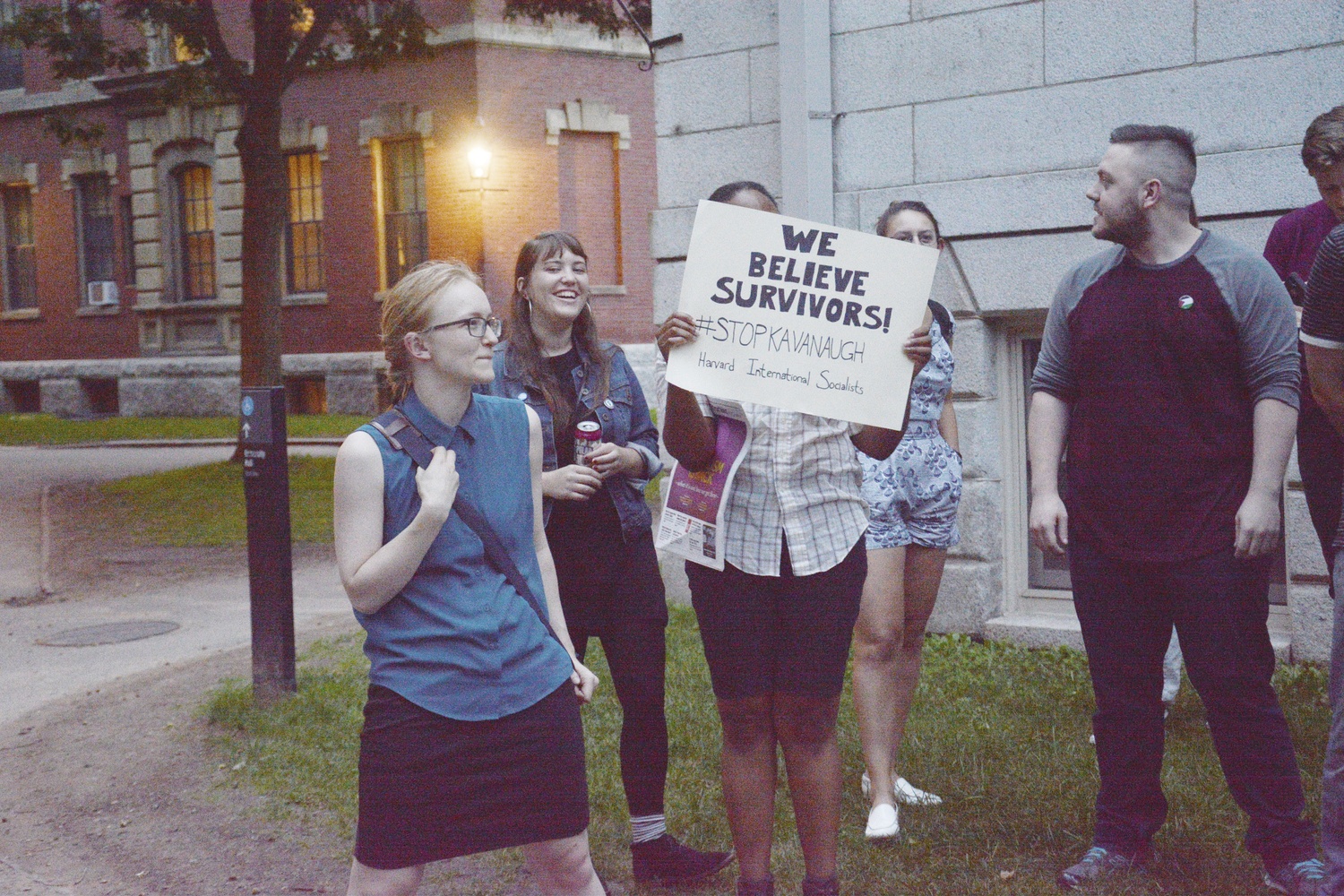 International Socialists member Samuel Nighman characterized the event as a “speak-out” designed to allow Harvard affiliates and Boston-area locals to voice their concerns about Kavanaugh’s nomination. At the rally, a dozen of the roughly 35 attendees gave megaphone-enhanced speeches on the steps of University Hall. At various points, the crowd booed at references to Kavanaugh and chanted slogans such as, “They say ‘Kavanaugh,’ we say ‘Hell nah.’”

President Donald Trump nominated Kavanaugh to fill the Supreme Court seat left vacant by Justice Anthony Kennedy in July. The judge’s confirmation seemed all but certain until two weeks ago, when women began to come forward with allegations he had sexually assaulted them decades ago.

First, Christine Blasey Ford told the Washington Post that Kavanaugh had forced her onto a bed, pressed his body to hers, and tried to take off her clothes at a party the two attended in the 1980s, when both were enrolled in private D.C.-area high schools. Just a few days later, another woman — Deborah Ramirez — told the New Yorker that Kavanaugh had exposed himself and pushed his penis in her face at a party both attended while students at Yale.

On Wednesday morning, a third woman came forward to accuse Kavanaugh of sexual misconduct. The woman, Julie Swetnick, said in a sworn affidavit that Kavanaugh was present while a group of teenage boys drugged and raped her at a D.C.-area party in 1982. She also alleged Kavanaugh participated in similar behavior at parties held between 1981 and 1982.

Kavanaugh has repeatedly and unequivocally denied all three allegations. Both Kavanaugh and Ford are set to testify at a high-stakes and nationally televised hearing before members of the Senate on Thursday at 10 a.m.

Late Wednesday night, hours before the testimony was scheduled to kick off, two more anonymous allegations surfaced in documents released by the Judiciary Committee. The committee published transcripts of phone calls it held with Kavanaugh on Sept. 17 and on Tuesday in which comittee members asked him about charges that he sexually assaulted a woman he was dating in 1998 and that he raped a woman on a boat in 1985.

Kavanaugh denied the charges listed in both calls, at one point calling the allegations "crazytown."

At the International Socialists rally, several speakers called on Harvard to sever ties with Kavanaugh, who has taught at the Law School since 2008. Several Law School students urged the University last week to bar the embattled nominee from returning to Cambridge to teach the course on the Supreme Court he is supposed to offer in Jan. 2019. The Law School is refusing to say whether it still plans to employ Kavanaugh.

As the evening went on, the gathering attracted attention from tourists and students milling around the yard. Midway through the event, a pair of Harvard freshmen passing by — Neil K. Khurana ’22 and Oluwatobi I. Ariyo ’22 — strode up the steps to University Hall and asked for moderation and a fair hearing for Kavanaugh and his accusers.

“We have to make sure that due process is still upheld and innocent until proven guilty is still a thing that we hold true,” Ariyo said. “I mean, I don’t know if the accusations are true or not true, but —”

A member of the International Socialists cut Ariyo and Khurana off and thanked them for speaking. Several members of the crowd shouted “Go away!”

The event concluded with calls for changes to both the international political order and to Harvard’s treatment of its affiliates who allege sexual misconduct. In her speech Wednesday, Our Harvard Can Do Better member Amelia Y. Goldberg ’19 said the allegations against Kavanaugh should be taken “seriously” by both Harvard and the U.S. Senate. OHCDB is an anti-sexual assault advocacy group.

“This is a person who is now being nominated for a permanent seat on the highest court in our country and who also holds a position at our University where he gets paid over $20,000 each year for teaching for nine days,” Goldberg said. “We’re requesting that these allegations, which are very serious in nature, be taken seriously.”