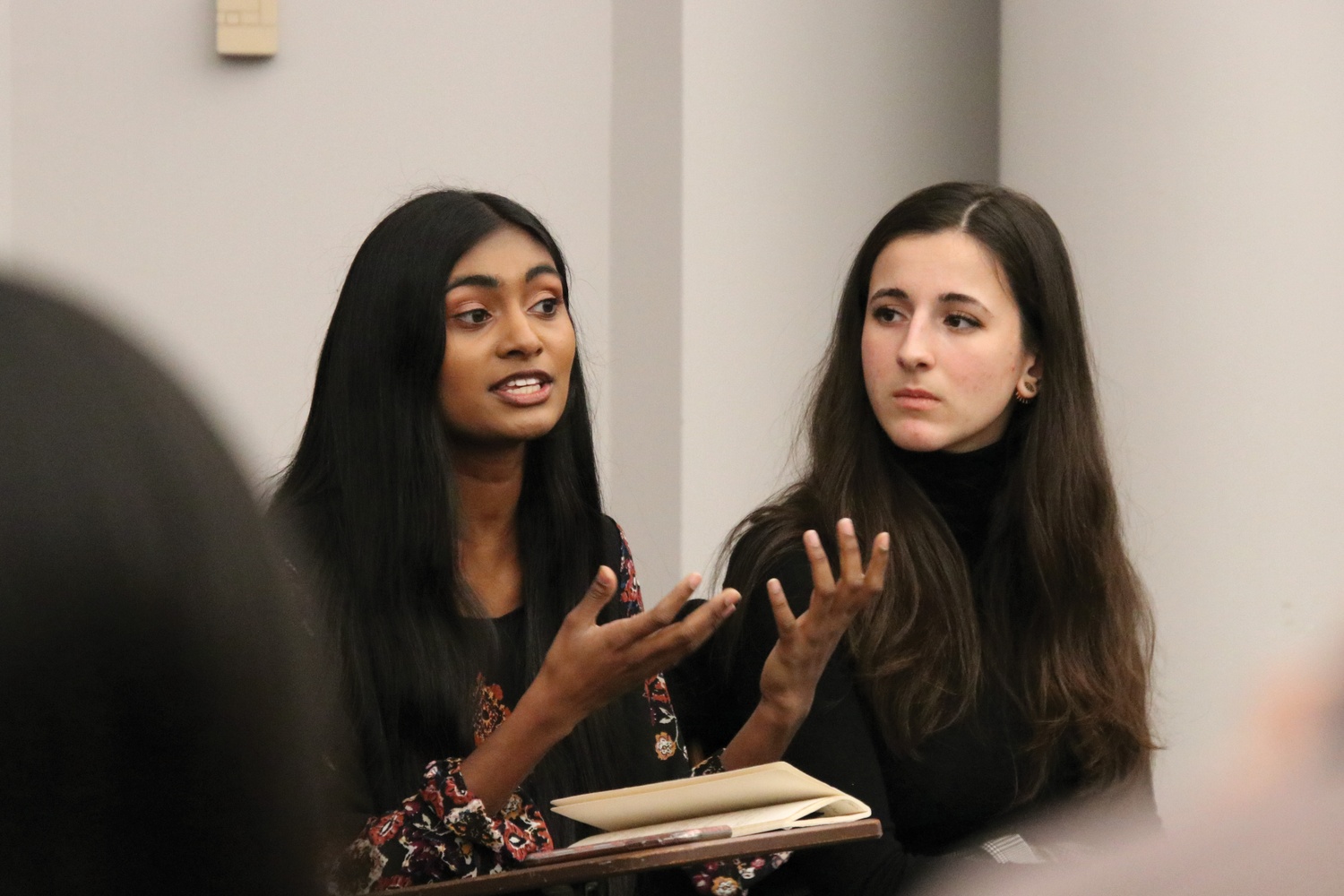 Sruthi Palaniappan ’20 and Julia M. Huesa ’20 believe that Harvard needs to support its increasingly diverse student body by listening to student’s various stories and experiences. Together, they are running to lead the Undergraduate Council as President and Vice President under the slogan “make Harvard home.”

Palaniappan and Huesa have worked on many UC projects, such as advocating for the creation of an Education Secondary and the enforcement of mandatory online sexual harassment training.

Bringing Students Into the Conversation

Palaniappan and Huesa said that an important part of their campaign involves connecting with students to understand their needs and making the UC more accessible to them.

“The UC can and needs to improve the ways that we communicate with the student body and actually bring in students to ensure that the policies that we’re pushing for, that the initiatives that we’re working on, aren’t done in a detached measure that is out of touch from what students actually need here on campus,” Palaniappan said.

The pair said they have worked towards including different student voices through the UC caucus system. Palaniappan helped create the Asian American caucus in the UC to represent the interests of Asian American communities on campus.

“It seems only natural that if you’re running for an elected position, you should have to interface and interact with the students that you’re claiming to represent,” Huesa said.

Changing the Climate on Campus

A significant portion of Palaniappan and Huesa’s campaign addresses ways to transform the social scene through what the pair has coined “cultural climate.”

With regards to preventing sexual violence, they are proposing cultural climate committees in all academic departments, similar to the standing committee created last year in the Government Department in reponse to allegations of sexual misconduct against professor Jorge I. Dominguez.

They also plan to design a cultural climate survey addressing topics such as mental health, inclusion, and belonging that will be released along with course guide evaluations at the end of every academic year.

“We know that students are expecting course evaluations to come out, are expecting an evaluation of their academic experience, but not necessarily one of their cultural experience outside of the classroom,” Huesa said. “But this is equally important to framing their life at Harvard. So it’s something that we think is really important to evaluating how the administration can better support students and how the UC can better support students.”

To promote a more accessible social scene on campus, the pair said they want to start their own grant project to subsidize student-initiated social events that provide inclusive spaces.

“One of the ideas in our platform that we hope will move social life back to the Houses and back to the dorms and student communities — things that the administration said that it would do, but has not really followed up on — is our social inclusion grant,” Huesa said.

The grant, Palaniappan explained, uses the ‘burst pack’ system within the Council — “sums of $3,000 each that aren’t connected to the traditional UC funding structures, so we’re able to use it in a no-strings-attached fashion in order to support such a program like this.”

Palaniappan and Huesa said their prior experiences on the UC and their strong friendship make them well-suited to successfully carry out their platform’s goals.

“These experiences both on the Council and off the Council have really informed our idea of the fact that students still don’t feel like they belong here at Harvard,” Huesa said. “Harvard still doesn’t feel like home to a lot of them.”

The pair said while they have a grand vision, they also have a practical plan of action to see their goals come to fruition.

“Whereas a lot of people in the past have put forth proposals that are very ambitious and wonderful for us to be focusing on, Julia and I have gone through the process of vetting these things to really see what is feasible within the scope of the UC within the term of the presidency,” Palaniappan said.

With full faith in each other’s ability to work together, Palaniappan and Huesa said they can create tangible changes to make Harvard feel like home for all students.

“After having been on the Council for this period of time, and seeing how closely the president and VP need to work together and need to be there to support each other and support the UC and the College, that relationship is extremely important and will only help us do our work better,” Palaniappan said.

As part of her work on the Education Committee, Palaniappan has fought to preserve "shopping week," a period at the beginning of each semester where students can try out classes before officially committing to them, which the administration is currently exploring the possibility of eliminating. She helped organize town halls regarding shopping week so students could interact with administrators, as well as a working group of students outside the UC to allow more students to serve as advocates.

As a Diversity Peer Educator, Huesa said she has been involved in making the culture on campus more inclusive. Serving as a Peer Advising Fellow has helped her stay in touch with and improve the freshman experience, Huesa said.

“Something that’s really important to us is bringing students into the conversation in a way that is not just a tokenizing involvement,” Huesa said.

Palaniappan and Huesa also highlighted their campaign’s emphasis on supporting mental health issues on campus. They plan to meet directly with faculty and teaching fellows to address these issues.

“TFs and faculty respond one way to a note from UHS saying that a student needs to be excused, but we don’t think that mental health has been treated with the same sense of legitimacy,” Palaniappan said.

Palaniappan and Huesa emphasized that they are not only running mates, but friends.

“Something I think is really special that makes our ticket unique is Julia and I have been friends far beyond our scope in the UC,” Palaniappan said.

A previous version of this article misattributed a quote. It has been updated.