10. “Kim’s Convenience” (Season One and Two American debut in 2018, Canadian premiere in 2016)
Based on Ins Choi’s 2011 play, “Kim’s Convenience” centers around one small enclave of the Korean diaspora, a Korean-Canadian family’s corner convenience store. There are the expected (and delightful) mini-dramas and shenanigans, like when Umma (Jean Yoon) recruits her estranged son for a church singing competition, only for them to give a feeble performance. But the sitcom’s real edge is its unanticipated bittersweetness: Later, the show is saved when Appa (Paul Sun-Hyung Lee) secretly joins in from backstage, his low voice regretful over his son’s banishment. For the most part, “Kim’s Convenience” is happy fun. But its quieter moments will leave you reeling. —Grace Z. Li

9. “GLOW,” Season Two
In 1980s Los Angeles, a ragtag group of women get a new lease on life when they join the cast of a new wrestling program, the Gorgeous Ladies of Wrestling (GLOW). In the second season of this neon-colored, campy romp, the fledgling performers fight to stay on air and begin to own the absurd stereotypes they’ve assumed as their wrestling personas. Amid the dramatic clashing of egos and creative ambitions, the characters grapple with the politics of workplace sexual harassment and assert their female agency. This season, they’ve proved themselves homegrown underdogs with big dreams, and thankfully show no signs of slowing down anytime soon. —Claire N. Park

8. “Big Mouth,” Season Two
Returning for a second season, the Netflix animated comedy “Big Mouth” tells the story of how puberty ravages a group of middle school students. All-star voice talent, including John Mulaney, Fred Armisen, and Maya Rudolph, and a writers room led by industry veterans Nick Kroll and “Family Guy” alum Andrew Goldberg make this prurient show about sexual awakenings, periods, and social jockeying one of Netflix’s more successful original cartoons. It revels in off-color humor and sometimes-insightful commentary on the social mores about growing up, and what it means to become an adult. —Noah F. Houghton

We reviewed the second season and found it enjoyable and honest. Read more here. 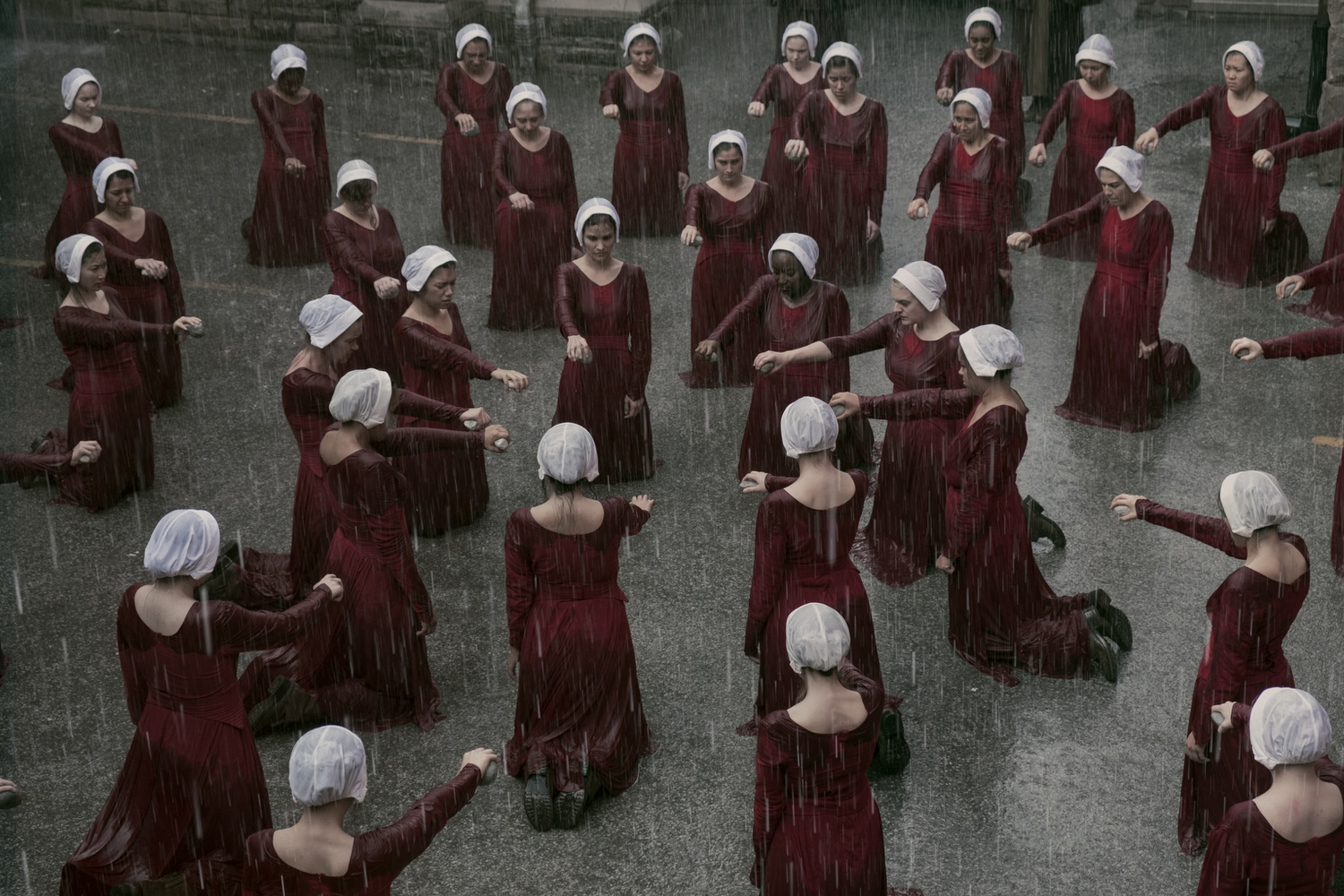 By Courtesy of George Kraychyk

7. “The Handmaid’s Tale,” Season Two
“The Handmaid’s Tale’” is set in a dystopian version of the United States, renamed Gilead, in which women are relegated to the status of objects. The Emmy award-winning first season, which aired in April 2017, felt relevant as issues of sexism and sexual assault emerged to the forefront of national discussion. The first season also seemed to play out most of the plot of the Margaret Atwood novel that was the show’s inspiration, which left people apprehensive about what might come next. The second season is equally dark, trapping protagonist June (Elisabeth Moss) in the same place where she started. —Yael M. Saiger

We reviewed the second season but found it disappointing and frustrating. Read our episode-by-episode coverage here.

6. “Atlanta,” Season Two
In “Atlanta: Robbin’ Season,” no one is safe. Earn (Donald Glover) continuously proves himself incapable both professionally and at home, learning that blood isn’t always thicker than water. Al (Brian Tyree Henry) reluctantly adopts and performs the rapper lifestyle that goes against his very nature, losing a part of himself in favor of a new Al more suited for the music industry. And Darius (Lakeith Stanfield)? Well, let’s just say he narrowly misses a fate we see all too often in headlines. Season Two of “Atlanta” isn’t as cohesive as the first, but its shining moments — Teddy Perkins, anyone? — make it even more worth the watch. —Mila Gauvin II

We recapped and reviewed the second season and thought it was occasionally brilliant but inconsistent. Read our episode-by-episode coverage here.

5. “Brooklyn Nine-Nine,” Season Five
Rumor has it that FOX’s cancellation of “Brooklyn Nine-Nine” this May provoked such impassioned public outcry that NBC picked it up for another season. While the changing hands had more to do with contractual politics, the drama was a testament to how beloved this daffy workplace comedy has become. In its fifth season, it’s clear what flavor of wacky each character brings to the precinct’s dysfunctional family, making the thrills of their detective work (dangerous intrigue involving a mob boss) as uproariously entertaining as their office shenanigans, which include elaborate Halloween traditions, wildly unprofessional police interrogations, and a ridiculous food truck venture. —Claire N. Park

4. “Queer Eye” Seasons One and Two
When this classic Bravo series was rebooted as a Netflix exclusive earlier this year, it was a godsend for many. In the political turmoil of 2018, the Fab Five — Antoni Porowski, Tan France, Karamo Brown, Bobby Berk, and Jonathan Van Ness — arrived to help the men of America clean their act up. On a quest not only to teach men about style, grooming, and clean eating, but also to solve deeper emotional hang-ups, the stars of the show charm everyone they meet, not least of all the audience. —Ethan B. Reichsman

We reviewed the first season and called it a “universal call for anyone just wanting to feel love.” Read more here.

3. “Insecure,” Season Three
It doesn’t feel like much happens in “Insecure” Season Three, but maybe that’s the point. After Issa (Issa Rae) quits her job, she embarks on several journeys, both romantic and professional, that aren’t what she’d hoped they’d be. The show paints her failures as quasi-successes — lessons she’s meant to learn from — but as we come to know in “Insecure,” learning from one’s mistakes is easier said than done. Right, Molly (Yvonne Orji)? This season doesn’t give us a lot to work with, but by the end, it looks like its characters are finally ready to work on themselves. —Mila Gauvin II

2. “BoJack Horseman,” Season Five
Season Five of “BoJack Horseman” sees its titular character in a new, self-aware spout of existentialism and insecurity. It’s as razor-sharp and dark as ever: BoJack (Will Arnett) confronts death during a 25-minute eulogy and becomes a feminist icon in the show’s daring artistic meditation on the #MeToo movement, all the while questioning what makes a good person “good” and a bad person “bad.” The show also takes its animation by the reins to wring out its creative potential, bridging the oft-discomforting gap between humans and animals who interact in ways more than platonic. —Kaylee S. Kim

We reviewed the fifth season and called it “poignant” and “satisfying. Read more here. By Courtesy of NBC/Colleen Hayes

1. “The Good Place,” Season Two and Three
It makes sense that a show revolving around the afterlife and questions about whether humans can really change has itself gone through many transformations during its first three seasons. Starring Ted Danson and Kristen Bell, whose chemistry provides the foundation for the surprisingly high-minded show, “The Good Place” demonstrates clearly that a TV show can tackle immense philosophical questions while consistently providing some of the funniest content the small screen has to offer. Of course, with a sitcom legend like Michael Schur (“The Office,” “Parks and Recreation,” “Brooklyn Nine-Nine”) running the show, “The Good Place” was destined for success. —Ethan B. Reichsman

We reviewed the season premiere and thought it was delightful and bold. Read more here.