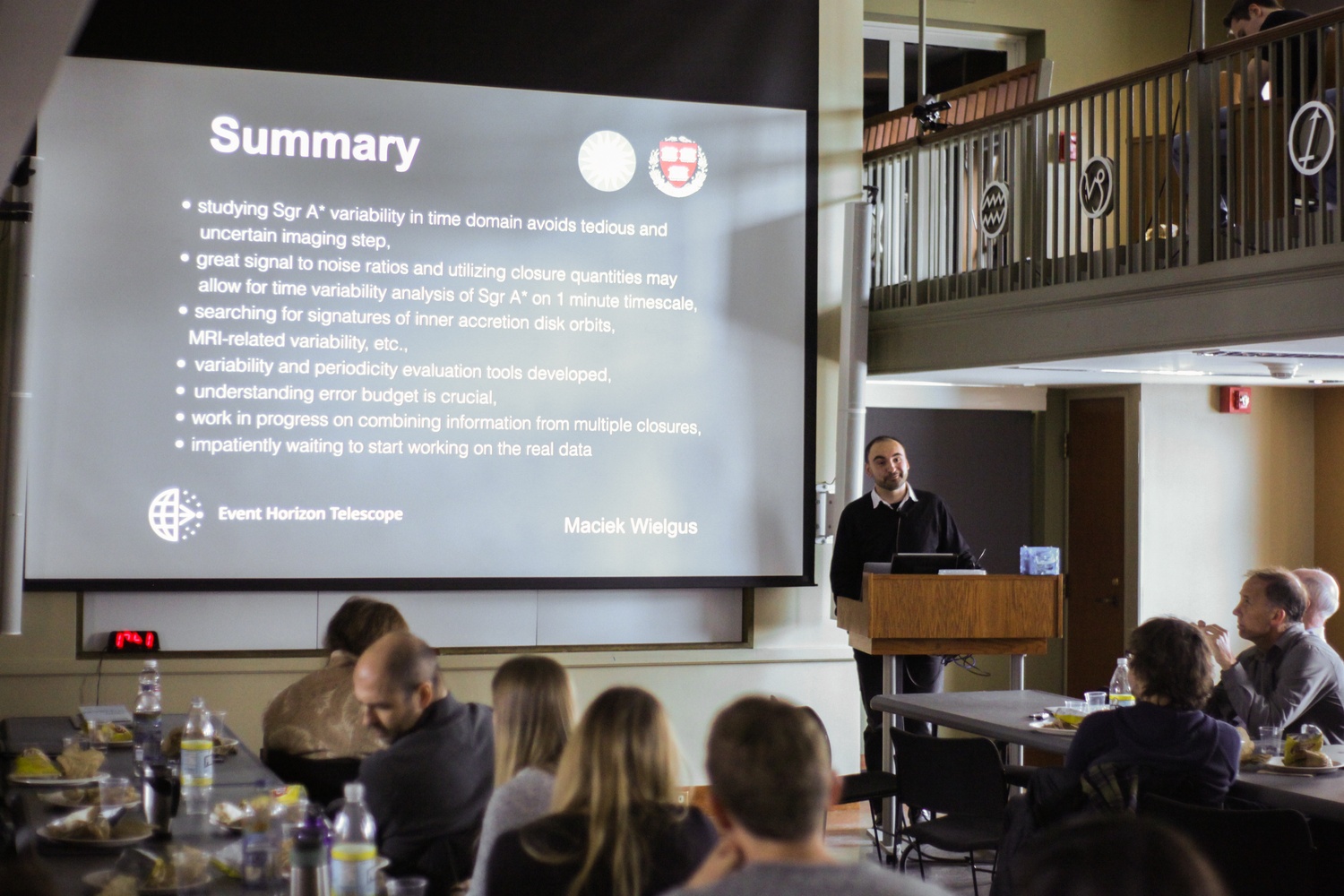 About a hundred astronomers and visiting scholars gathered in the Harvard-Smithsonian Center for Astrophysics’s Phillips Auditorium to hear about the latest advancements in astrophysics at a Thursday luncheon hosted by the Harvard-based Institute for Theory and Computation.

The institute's weekly luncheons attract attendees from around the world, who enjoy sandwiches and chips while listening to four 10-minute presentations on different topics within the field. Presenting at this week’s luncheon were Maciek Wielgus, a fellow at Harvard’s Black Hole Initiative; James J. Bock, a physics professor at Caltech; Saurabh Singh, a Ph.D. student at the Raman Research Institute in India; and Christopher F. McKee ’64, professor emeritus of astronomy and physics at UC Berkeley.

Harvard Astronomy Department Chair Abraham “Avi” Loeb said the weekly luncheons are an important way for astronomers and scientists to stay up-to-date with the latest results in the field.

“Astronomy is a very active frontier of research. We now know things we haven’t known a decade ago, which are very exciting,” said Loeb, who is also the director of the Institute and the Black Hole Initiative.

Loeb added that Harvard’s unique resources and academic environment are valuable for the future development of his field.

“Harvard is very special. A year and a half ago, we inaugurated the Black Hole Initiative, which is the only center in the world which focuses on black holes, all aspects of black holes,” Loeb said. “The special thing about this center is that it involves people from the astronomy department, the physics department, the math department, and philosophy and history of science departments.”

At Thursday’s luncheon, Wielgus described one Black Hole Initiative-related project, which uses the Event Horizon Telescope to image the silhouette of Sagittarius A*, a radio source believed to be a supermassive black hole at the center of the Milky Way Galaxy. After explaining the premise of his research, Wielgus identified visibility errors as one of the main challenges for the project.

The colloquium then turned to focus on the BICEP-Keck experiments, which measure the cosmic microwave background radiation that pervades the universe. Data from the experiments are being used to find signals of gravitational waves from the beginning of the universe, according to Loeb.

Singh’s presentation discussed the first stars formed during the period when the universe became completely ionized, as well as an experiment measuring the effects of radiation from those stars on hydrogen gas in an earlier universe.

In his talk, McKee presented a model supporting the hypothesis that previously unaccounted-for subatomic particles called galactic baryons could be found in the galactic corona, described by Loeb as “the halo of hot gas that surrounds the Milky Way.”