​The College has placed Harvard College Faith and Action on “administrative probation” for a year after the organization pressured a female member of its student leadership to resign in September following her decision to date a woman. 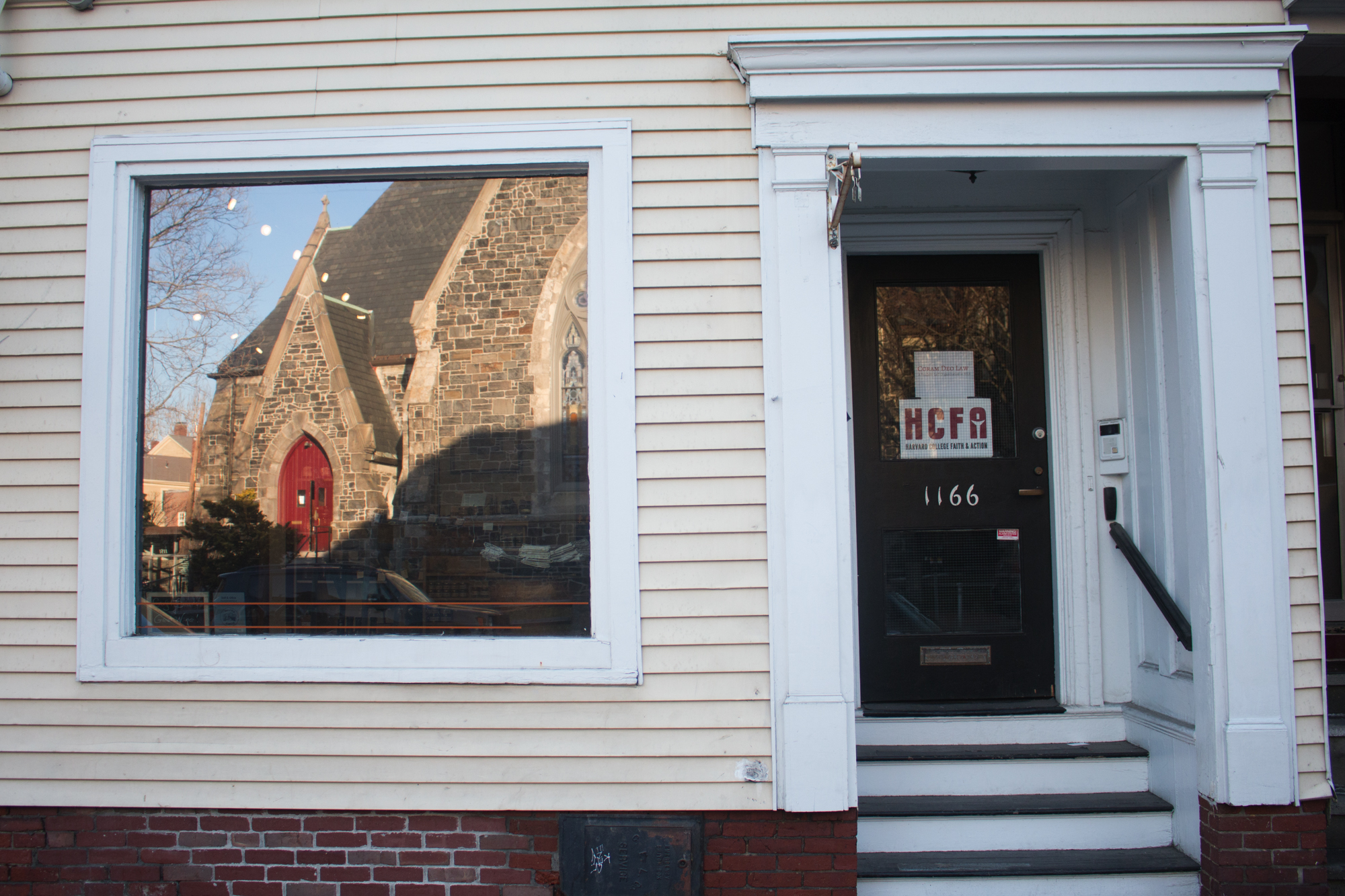 Harvard College Faith and Action occupies offices in a building on Massachusetts Avenue near Harvard Yard.

​The College has placed Harvard College Faith and Action on “administrative probation” for a year after the organization pressured a female member of its student leadership to resign in September following her decision to date a woman.
By Caroline S. Engelmayer and Michael E. Xie

The Office of Student Life has placed religious group Harvard College Faith and Action on “administrative probation” for a year after the organization pressured a female member of its student leadership to resign in September following her decision to date a woman.

College spokesperson Aaron M. Goldman announced the move to put HCFA on probation in an emailed statement sent to The Crimson Wednesday afternoon.

“After a thorough review and finding that HCFA had conducted itself in a manner grossly inconsistent with the expectations clearly outlined in [the Office of Student Life’s] Student Organization Resource and Policy Guide, OSL has placed HCFA on a one year administrative probation,” Goldman wrote in the statement.

Goldman did not specify how HCFA, the largest Christian fellowship on campus, had violated Office of Student Life “expectations.” In an emailed statement Wednesday, HCFA co-presidents Scott Ely ’18 and Molly L. Richmond ’18 were slightly more specific.

“Earlier today, we met with an administrator who informed us that the College would place HCFA on probation, citing our relationship with Christian Union as well as our standards for leaders,” Richmond and Ely wrote Wednesday. Christian Union—a national umbrella group with outposts at all eight Ivy League schools and Stanford—helps fund and support HCFA.

The decision to suspend HCFA, though, is almost certainly tied to the Sept. 2017 resignation of a female bisexual former assistant Bible course leader. HCFA leadership asked the woman to step down from her position after they learned she was dating another female student—violating guidelines laid out in the Harvard College Student Handbook, which stipulates recognized campus student groups cannot discriminate on the basis of “sexual orientation.”

This account of events is based on interviews with 12 current and former members of HCFA as well as documents, emails, and text messages obtained and reviewed by The Crimson. The former assistant Bible course leader, as well as several other members of HCFA, spoke only on the condition of anonymity.

The meeting between College administrators, Richmond, and Ely Wednesday—and the Office of Student Life’s move to put HCFA on probation—came less than a day after The Crimson contacted the College and HCFA about the publication of this story.

If HCFA decides to re-register as a recognized student organization next spring, the Office of Student Life “will require updated materials demonstrating that they are in compliance with the University’s nondiscrimination” policies, Goldman wrote.

Ely and Richmond, though, maintain HCFA never fell out of compliance with Harvard’s non-discrimination guidelines.

“We reject any notion that we discriminate on the basis of sexual orientation in our fellowship,” the co-presidents wrote in an email Wednesday. “Broadly speaking, the student in this case was removed because of an irreconcilable theological disagreement pertaining to our character standards.”

Ely and Richmond wrote they believe HCFA’s standards on topics related to issues like extramarital “sexual activity” are applied equally to student “leaders of all sexual orientations.” The two added HCFA only addresses violations of its leadership standards that others bring to the group’s attention.

“We’re not the morality police,” Ely and Richmond wrote.

Around the start of the fall semester, the former assistant Bible course leader was feeling “truly good.”

Sophomore year had been difficult; but the woman had begun a relationship in mid-August and was finally beginning to feel “inexplicable peace,” she wrote in a Sept. 18 email to her HCFA mentees. HCFA assistant Bible course leaders are each tasked with mentoring several other members of the organization.

“This person really makes me laugh, makes me feel safe, and can get me to breath[e] again during times of hyperventilating in a really bad panic attack, challenges me to be a better person for myself, others, and God,” she wrote of her romantic partner. “I know a person or relationship doesn’t ‘fix you,’ but I can honestly say that having this relationship has been an incredible support that has helped me get to the point that I am at now.”

There was just one “catch.”

“This person is a girl,” the woman wrote.

The woman wrote she and her girlfriend, also a member of HCFA, had prayed “a lot” about their relationship and that both felt “extremely at peace” with their love for one another as well as their faith.

HCFA leaders, however, did not feel the same. Weeks into the semester, at least one ministry fellow—a Christian Union-employed ministry faculty member who teaches HCFA Bible courses—discovered the woman had entered into a same-sex relationship.

Anne Kerhoulas, the ministry fellow, texted the woman on Sept. 11 asking to meet the next day, according to text messages reviewed by The Crimson. The woman knew Kerhoulas through her Bible study class, which the woman was helping lead.

Sometime in the next few days, the woman met with Kerhoulas and Christine Shin, another ministry fellow. During that meeting, the two ministry fellows sought to understand the current status of the woman’s same-sex relationship and how it had developed, the woman said.

After some discussion, the ministry fellows made up their minds: They requested the woman step down from her role as an assistant Bible course leader, according to the woman.

Four friends of the woman corroborated her account. Several students confirmed the meeting occurred and others said she gave them the same account of proceedings at the time, several months before she shared her story with The Crimson. The Crimson also reviewed text messages exchanged between Kerhoulas and the woman setting up the meeting that further corroborated the woman’s story.

Neither Kerhoulas nor Shin responded to multiple requests for comment.

Later that same week, after the meetings, Kerhoulas sent an email to HCFA students enrolled in her Bible course announcing the woman would be “stepping out of her role as an ABCL” for the class.

“It has been a hard couple weeks as we arrived at this decision, but I, the staff team, and the executive team all believe that this is the best and appropriate step,” Kerhoulas wrote in the email, obtained by The Crimson.

“In light of [my same-sex relationship], I have been asked to step down from my leadership position as a ABCL,” the woman wrote in the same email, her comments excerpted under Kerhoulas’s. “I cannot express how much this saddens me.”

Asked whether they or any other student leaders of HCFA played a role in the decision to ask the woman to resign from her position, Ely and Richmond wrote in an email Wednesday that undergraduates make all major decisions at HCFA.

HCFA’s character standards—outlined in an internal six-page document—do not specifically address or mention homosexuality. Two bullet points listed under the heading “Sexual Purity” suggest HCFA leaders should refrain from sex before marriage and also give general advice about relationships.

“Use wisdom in your dating life,” the document reads. “Be aware not only of the importance of honoring God in your romantic relationships, but to set a good example and model for other believers who will look to you for implicit guidance as a leader.”

Asked to explain the “theological disagreement” that led to the woman’s dismissal, Ely and Richmond mentioned HCFA’s stance on extramarital sex.

“Our theological view is that—for professing Christians who are in leadership—celibacy is the only option outside the bounds of marriage,” Ely and Richmond wrote. “We have applied and do apply this policy regardless of sexual orientation.”

The woman, as well as four other members of HCFA, said they believe she was not asked to step down from her position because she is bisexual. Instead, HCFA leadership pressured her to resign because she chose to actively pursue a same-sex relationship, according to the woman and the four other individuals.

But both did not pursue same-sex relationships while in office. Parker said in an interview Wednesday that he remained “chaste” during his tenure as an HCFA leader. Wickline, who said she is bisexual, said she pursued a relationship with a man while helping lead HCFA.

Asked whether HCFA’s official policy mandates that BGLTQ members remain celibate in order to hold leadership positions, Parker said he thought that was a "better question for the current leadership."

Asked the same question, Ely and Richmond did not directly answer.

It is unclear exactly what HCFA’s newfound probationary status entails.

Ely and Richmond wrote in an email Wednesday that College administrators told them HCFA is the first-ever campus group to be placed on administrative probation. The two said they are unaware of the “full ramifications” of the designation.

Goldman, the University spokesperson who announced HCFA’s probation, did not immediately respond to a question asking whether probation means the group will be stripped of all rights and privileges granted to recognized student organizations.

Recognized student groups enjoy several benefits courtesy of the Office of Student Life, including the ability to reserve Harvard rooms and venues as well as access to a bank account.

Other privileges granted to recognized student organizations include the right to poster on campus and permission to participate in activity fairs, both key ways campus groups recruit undergraduates. HCFA, founded in 2008, currently boasts roughly 200 members.

In order to reverse its probationary status, HCFA must prove its compliance both with Harvard’s non-discrimination policies and with “stated expectations regarding local governance,” Goldman wrote in his statement Wednesday.

HCFA currently receives funding and support from Christian Union, which asserts its mission to be “developing Christian leaders to transform culture.” Referred to on HCFA’s website as its “parent ministry,” Christian Union hires HCFA staff and subsidizes the cost of materials and events.

The Harvard College Student Handbook stipulates that all recognized student organizations must maintain “local autonomy” and must “make all policy decisions without obligation to any parent organization, national chapter, or charter.”

Don Weiss, a ministry director at HCFA employed by Christian Union, wrote in an emailed statement Wednesday that Christian Union is not involved in the governance of the student group.

“The policies and decision-making of HCFA are made by the undergraduate leadership, not any of the ministry fellows or Christian Union,” Weiss wrote.

“We reiterate that Christian Union makes no decisions for HCFA,” Ely and Richmond wrote in an email Wednesday. “We partner with them for pastoral, spiritual, and financial support, but in no way do they control HCFA’s governance and leadership.”

Goldman did not respond to a question asking whether the Office of Student Life expects HCFA to disaffiliate from Christian Union in order to meet Harvard’s local autonomy standards.