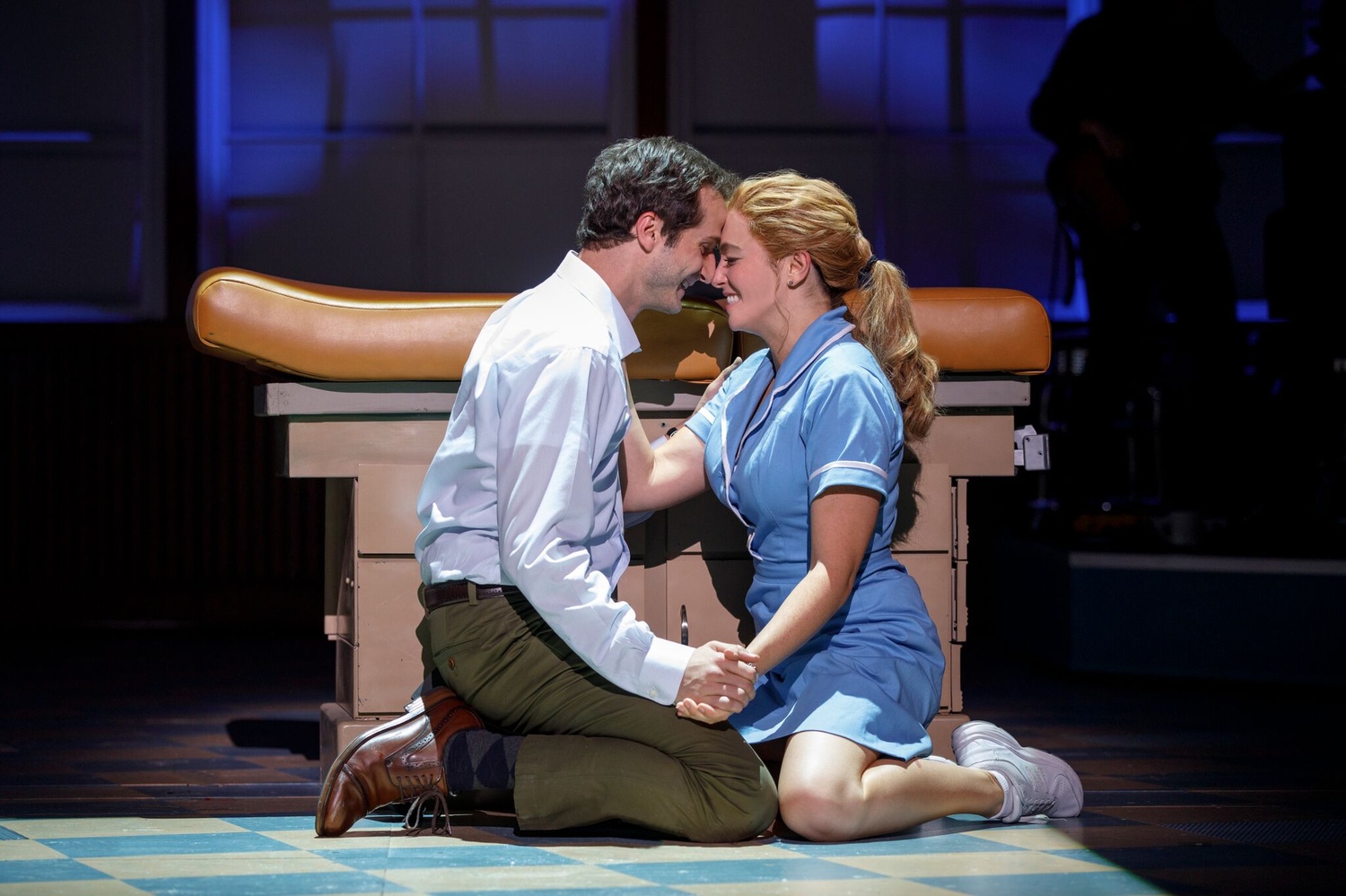 Hugh Panaro as The Phantom and Mary Michael Patterson as Christine in The Phantom of the Opera. By Courtesy of Joan Marcus
By Mason P. Sands, Contributing Writer

If you’re hoping for a revolutionary and original Broadway production, don’t waste your money on “Waitress.” While Tony-winning director Diane Paulus leads an entertaining show, “Waitress” is not incredibly impressive and falls short of the expectations popular buzz has given it.

Playing at the Boston Opera House until March 4, “Waitress” centers on Jenna (Desi Oakley), a Southern waitress and pie chef extraordinaire who lives in the American South and unexpectedly becomes pregnant. To escape her abusive husband Earl (Nick Bailey) and provide a better life for her child, she enters a pie-making contest. Along the way, she builds relationships with the customers and employees of Joe’s Dinner. Though the play is comedic and a technical marvel, it fails to create any real depth, leaving the audience laughing but emotionally unfulfilled.

The production takes full advantage of the unique features of the Boston Opera House during set transition, elevating the show’s technical aspects. Not only are these transitions smooth, but they also contribute to the storytelling as they change in accordance to the emotional shifts in the play. Rather than minimizing conspicuousness, the movement of set pieces and backdrops draws the audience into the story. Lighting and costuming are equally a delight. The combination of the two aspects creates a vibrant production that conveys the joviality and sparky personalities of Jenna and her friends at Joe’s Diner.

Though Grammy-nominated singer Sara Bareilles pens the lyrics, the music is neither unprecedented nor extraordinary. With the exception of the song “She Used to Be Mine,” Sara Bareilles’ work is formulaic, relying on the style and sound of traditional musical theater with a mix of pop in the upper registry. Lorin Latarro’s choreography is far more exciting. Though it seems gimmicky early on, filled with unnecessary synchronised movement that detracts from the music, it eventually contributes to the power of scenes like the birth of Jenna’s child. Working in conjunction with superb set transitions, movement captures emotional dynamics that the acting fails to portray.

The overall production is light and humorous, but it loses its emotional gravity in its comedy. The love story between the two eccentric young nerds, Dawn (Lenne Klingaman) and Ogie (Jeremy Morse), along with Nurse Norma’s (Maiesha McQueen) perfectly timed snarky commentary, incites lots of laughter. Yet “Waitress” also has a more serious side, to which the acting fails to do justice. Oakley’s Jenna is static and passive. Experiences evoke emotion because of the inherent tragedy of the situation rather than the emotional empathy the audience should feel towards her character. Oakley’s inability to portray any emotion other than shallow optimism prevents the audience from truly understanding her world. Though she has friends and support, her life is full of domestic trauma, deceit, and desperation, none of which are fully explored.

Other characters also lack emotional depth. The cast generally struggles to deliver serious moments and compensates by leaning heavily on their characters’ comedic sides. The one notable exception is Bailey’s Earl. Because his character is steeped in darkness, Bailey delivers a a gripping performance and delves into the multi-faceted mind of Jenna’s abuser, which helps audiences understand why Jenna feels bound to him. Baily’s acting highlights Earl’s anger, manipulation, and eventual vulnerability in such a way that he delivers the most authentic performance of the entire show.

Acting issues ultimately stem from deficiencies in the writing and plot issues. In the earlier parts, “Waitress” raises a lot of serious questions: When do we leave those who need us? Can extramarital affairs ever be moral? What responsibilities do we owe to others and what do we owe to ourselves? The most popular song, “She Used to Be Mine,” a ballad which focuses on Jenna’s view of herself, effectively encapsulates these musings. Besides this song, “Waitress” isn’t fulfilling. Characters react indifferently instead of making changes. Their arcs stretch over hours, only to be hastily resolved at the end. This problem affects even the main character—the birth of her baby, her relationship with Earl, and her affair run through half of their arc in the final 10 minutes of the production, such that the major questions are only half-heartedly answered.

In the end, “Waitress” is your average feel-good Broadway play. For what it does set out to accomplish, it accomplishes well, managing to marvel with its technical aspects and its comedic wit. It is a musical that is heart-warming for the whole family. Yet it is unquestionably surface-level and therefore a superfluous addition to the Broadway collection.