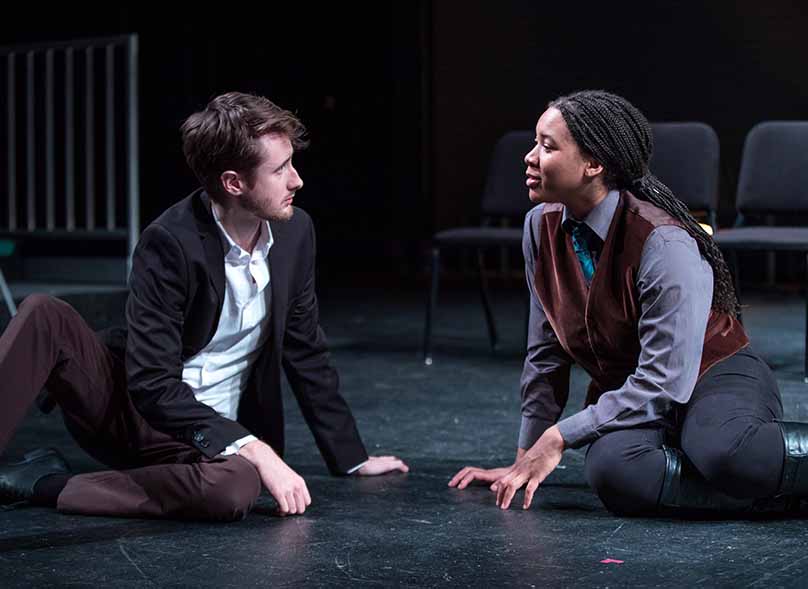 Bedlam Theater Company’s “Saint Joan,” which ran at the Cutler Majestic Theatre at ArtsEmerson until March 24, is clear as a bell—even if its audience cannot hear the divine “voices” that Joan hears in the sounding of the churchbells, prompting her to drive out the English from France in the name of God and country. The genius of this production is at once its flaw: its inventive, vivid, and straight-forward emphasis on the text, when staged today, rings with a note of menace that this production does not confront.

The production, performed in conjunction with Bedlam’s “Hamlet,” by the same repertory cast, was one of Bedlam’s first, and both shows received immediate critical acclaim following their inaugural runs at the Access Theater in New York in 2012. They owe their singularity to their small cast size: All roles in the two plays (24 in “Saint Joan”) are played by four actors. This constraint becomes one of the biggest assets of both shows, which utilize the near constant character-switching to the max. Under the remarkable instruction of director Eric Tucker, who also served as a player in the original instantiation of the show, the problem of too-few actors provides a steady influx of humor, makes full use of the versatility of the performers, and, in the case of “Saint Joan,” highlights the similarities between adversarial parties and the shared logics underlying the opposing arguments in this dialogue-heavy play.

The minimalist design displays a similar resourcefulness: A table in one scene is propped on its side to become the ledge of a window in another, transitions are created by an actor walking across the stage with a handheld speaker, and a journey from France to England is signalled by the introduction of a brown tweed suit and two teacups.

Audience configuration changes for each act. Whereas at first audience members are seated in the orchestra and on risers facing each other on the left and right sides of the stage, in the intermission before the second act an enormous white cloth is pulled back to reveal a third set of risers at the back of the stage, and those seated in the orchestra are prompted to move on stage. This reconfiguration mid-play turns the audience into presiding members of the Church, whom Sam Massaro refers to in his best characterization as the French theologian Peter Cauchon. Audience members seated on stage are able to notice three stained glass windows fortuitously located high up at the back of the theater, which transform the whole building into a cathedral. During the trial in the third act, the stage curtain is closed and the performers address each other, the audience, and Joan—who sits alone on stage on a “scaffold” comprised of a chair on top of a white table in front of the red stage curtain—from the aisles leading to and in front of the stage, and even from the balcony, incorporating the entire theater and audience into the setting of the trial.

The performances are, on the whole, very strong: Aundria Brown as Joan is best when she is at her most vehement—her girlish excitement in the first act and in the epilogue seem incongruous with her portrayal of Joan as a warrior. Sam Massaro and Kahlil Garcia cycle through their many roles with humor and grace. Aubie Merrylees shines in each of his parts, from the bumbling French squire Robert de Baudricourt to the coolly self-interested Earl of Warwick, to the Inquisitor, one of the strongest performances of the show. Thanks to Merrylees’ extraordinary delivery, the reasoning which would justify the burning alive of a young woman in the name of “mercy” comes through with terrifying clarity.

Indeed, the primary strength of the production is its simplicity and clarity of delivery, which makes each perspective in the conflict entirely understandable. As Shaw wrote in his preface to the play, “[T]here are no villains in the piece . . . It is what men do at their best, with good intentions, and what normal men and women find that they must and will do in spite of their intentions, that really concern us.” Indeed, in the speeches of the representatives of each institution in question—the British and the French aristocracy, the Church, the monarchy, the petty nobility—we find an entirely believable logic of self-interest.

Yet Joan’s argument, which favors blind faith in God, country, and a popular demagogue, make this production strongly unsettling in 2018. Notably absent are the voices of the people who follow Joan, and who, we are told, will turn against her as soon as she is out of favor. The play positions her as a populist leader who challenges the powers that be—but we are asked, finally, to side with Joan not out of any interest in the unseen people of France, but because she says she hears voices in the ringing of church bells. This faith in an individual who claims access to a “truth” that they alone perceive is unavoidably familiar to any current audience member. Finally Bedlam, in its own good faith, puts forward a staging loyal to a great work of theater, but in doing so ignores the unavoidable changes in its resonance between its first staging in 2012 and today.

—Staff writer Chloe A. Brooks can be reached at chloe.brooks@thecrimson.com.