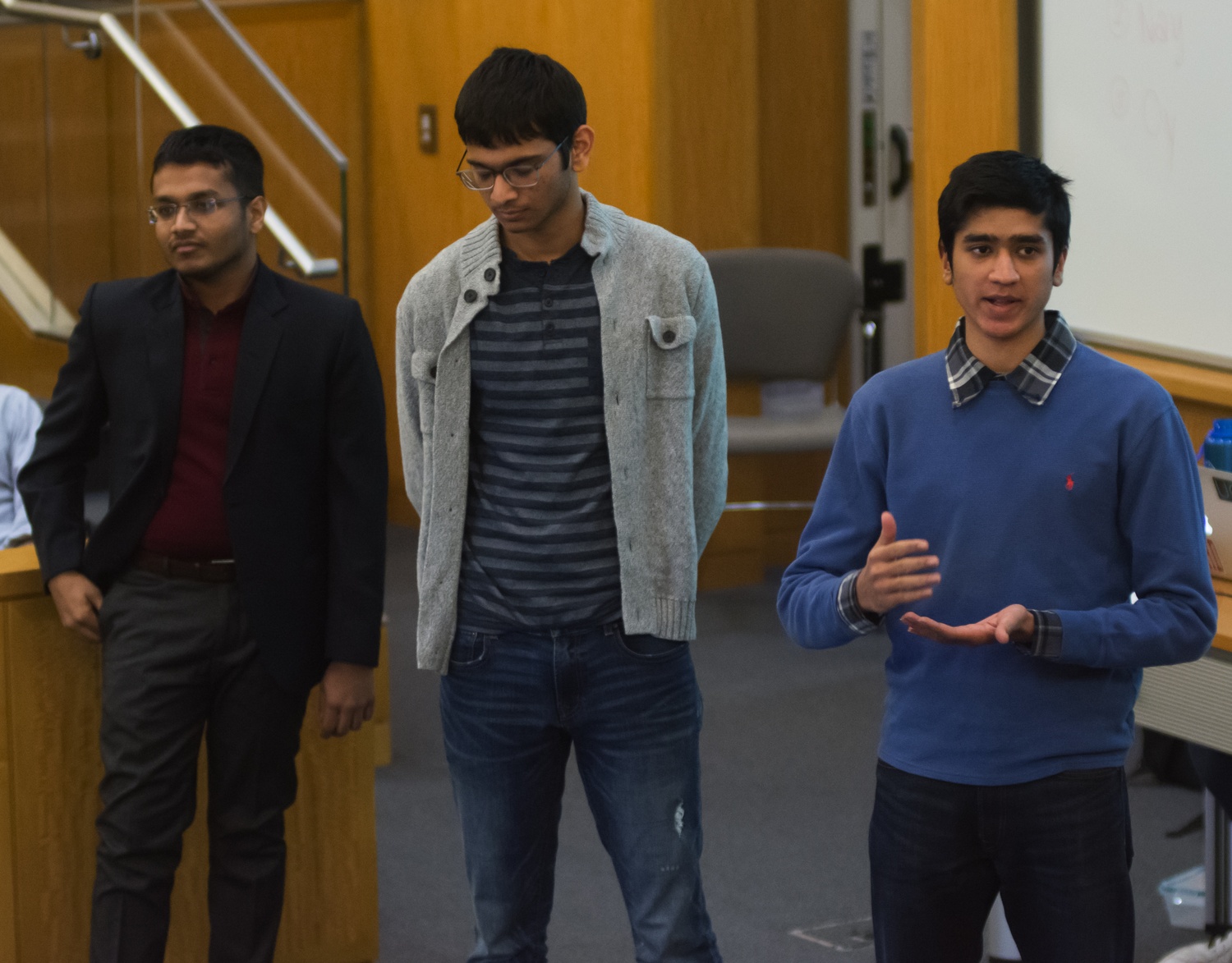 Two students speak about a proposed Survey on the State of Mental Health, Inclusion, and Belonging of the Undergraduate Population at an Undergraduate Council meeting last week. By Caleb D. Schwartz
By Jonah S. Berger, Crimson Staff Writer

The Undergraduate Council voted Sunday to endorse a proposal to establish a prison education system at Harvard.

The proposed program, which would give currently incarcerated individuals who qualify the ability to take classes from University faculty, would be modeled on similar initiatives at Columbia, Cornell, and Yale.

Both Yared and Sonya A. Karabel ’18, an inactive Crimson editor, presented the legislation as members of the the Harvard Organization for Prison Education and Reform, which worked with UC representatives to craft the legislation.

Some representatives opposed eliminating the question, arguing it is needed to give the College a fuller view of each applicant.

“I mean, they ask so many things. They ask about your religion, your gender, everything,” UC Treasurer Nadine M. Khoury ’20 said. “I just feel like depriving the admissions office of information that is relevant to experiences as a human being, I think it misinforms the admissions office.”

A College spokesperson could not immediately be reached for comment Sunday evening.

The Council also passed legislation at the meeting calling on the administration of University President-elect Lawrence S. Bacow to “continue in its predecessor’s footsteps” in supporting undocumented students.

Current President Drew G. Faust has condemned the Trump administration’s decision to end the Deferred Action for Childhood Arrivals Program and has lobbied congressional leaders for a permanent fix to the program.

The legislation urges the administration to call on Congress to pass a “clean Dream Act,” which would ensure the “protection of DACA recipients without penalizing or criminalizing their family members.”

Mather House Representative Eduardo Gonzalez ’18, who co-sponsored the resolution, added an amendment recognizing that “no undocumented immigrant is illegal” and that all undocumented immigrants deserve “freedom from a life of fear and uncertainty,” prompting some opposition from Council members.

Some representatives objected to the expanded purview of the amendment, as the legislation as originally written only encompassed immigrants who qualified for DACA or Temporary Protected Status.

“I think there’s consensus on DACA,” said Kirkland House Representative Parth Thakker ’18, who abstained from voting. “But I don’t want to us to conflate DACA with all illegal immigration as a whole.”

Also at Sunday’s meeting, the Council failed to pass a piece of legislation that would have funded Mental Health Matters week. The initiative, a similar version of which the UC funded last year, would have funded two petting zoos, a smoothie study break, and massages.

Multiple representatives said they believed that the money—which would have added up to $3,000 in total—should be used in more substantive ways.

“The way that you can address mental health concerns is by giving more money to therapy, and to making sure people have access to genuine mental health resources,” UC Parliamentarian Sonya Kalara ’21 said. “Making it seem like that problem can be fixed with something like a petting zoo, I think undermines what mental health really is.”