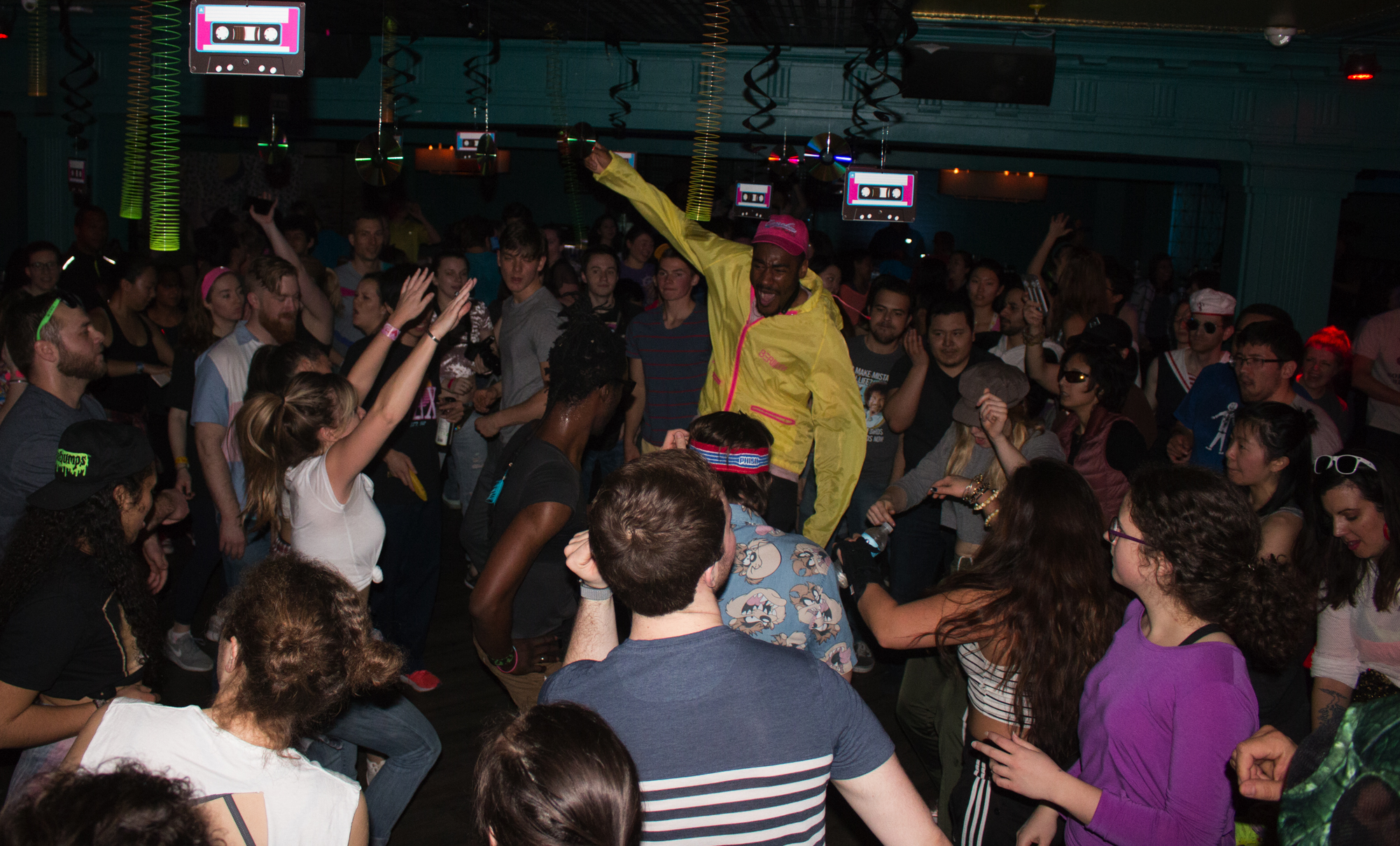 Where the Wild Things Are at 7 a.m.

We are waiting to enter Cure Lounge (described as “Boston’s Sexiest Lounge” on its website) in the wee hours of a Thursday morning to attend Daybreaker: an “early morning dance movement.”
By Hillary A. McLauchlin and Norah M. Murphy

“You are in the matrix.”

The DJ switches the track to an unrecognizable, slowed-down EDM remix of a 1990s pop hit. The mass of bodies suddenly begins to move in slow motion. Discarded mini-cans of limited-edition Polar Unicorn Kisses™ seltzer and half-eaten pouches of chia seed pudding litter the floor of the dimly lit, underground club. A brass ensemble adds to the cacophony. Mysterious staff members dubbed “mischief makers” push through the crowd, one carrying a large traffic cone and another a set of bongo drums.

Thirty minutes prior, we’re standing on Tremont Street in the morning light, next to a small crowd of people in brightly colored leggings and parkas. Are we early?

A gruff construction worker approaches the motley crew and asks us what we’re waiting for.

“A dance party,” replies a woman in leopard print leggings; she qualifies that you have to pay to enter.

We are waiting to enter Cure Lounge (described as “Boston’s Sexiest Lounge” on its website) in the wee hours of a Thursday morning to attend Daybreaker: an “early morning dance movement” that holds events in 22 different cities. The group’s first event took place in New York City in 2013, and several Daybreakers have been held in Boston since then.

Daybreaker believes that starting the day with dancing—and a yoga class “pregame” for an extra fee—will provide the energy needed to get attendees through the next 24 hours. Their website breaks down the Daybreaker D-O-S-E™, the combination of brain chemicals (Dopamine, Oxytocin, Serotonin, and Endorphins) conducive to an improved mood.

The doors open promptly at 7 a.m., and we are welcomed by two exceedingly chipper women wearing a variety of brightly colored spandex items in a loose interpretation of this morning’s “90’s Throwback: Radical Rewind” theme. Our hands are stamped with glow-in-the-dark, vaguely Illuminati-esque logos, and we blearily descend the stairs of Cure Lounge.

We emerge onto the dance floor, soundtracked by long-forgotten top 40 hits of 1995. People roll up their yoga mats and mingle by a snack table piled high with pink himalayan sea salt chips and packets labeled “Discover Hemp.” The scent of vodka and vomit, leftover from the previous night’s debauchery, hangs in the air. There are significantly fewer people than we had anticipated.

We look at each other. “Shit.”

*NSYNC’s “Bye Bye Bye” changes everything. By 7:26 a.m. the room is packed and the party has started.

“Can I see a bit of engagement and hope from your entire body,” yells the emcee, the first of a seemingly endless stream of aphorisms. A dance circle emerges, led by dancers too polished to be here of their own volition. iPhone cameras flash almost constantly; everyone is Snapchatting as if their lives depend on it. One dancer yanks off tear-away pants, another spins on his head.

The emcee continues, “Do I got MIT in the house?” An unsynchronized, soft cheer is heard above the din of “Oops, I Did it Again.”

“I expect for you to be leaders on the dance floor.”

Taking this invitation to heart, a group of college-aged males push their way to the center of the circle. They’re very enthusiastic—are they planted dancers? Are we in the matrix?

“Happy Purim to the Jews!” the emcee shouts.

A man in a full body Godzilla suit (including mask) and a young woman dance in a tight embrace reminiscent of Guillermo Del Toro’s “The Shape of Water.”

On the other side of the room a woman in an NPR shirt dances furiously, and a tall, bald man in a TEDxHonolulu tee moves slowly and gracefully to the throbbing bass. A woman we had spoken with earlier spots us and asks if we’re enjoying ourselves. We sputter out a response. “I can see it in your face,” she says with a wide grin.

Sensing a lull in the action after a spontaneous round of limbo, the 90s’-clad mischief makers—members of the collective that organize Daybreaker—emerge with a large multicolored tarp. They lift the rainbow parachute above the audience, evoking memories of first grade P.E. class. A single couple locks lips on the outskirts of the ring as everyone else jumps underneath the billowing fabric.

Not five minutes after the parachute appears, the mischief makers whisk it away. The Spice Girls’ “Wannabe” shakes the dance floor, and the bongo-drum toting emcee shimmies over to us. He thrusts a microphone in our faces, encouraging us to sing along with a toothy grin. The lyrics escape us. Zig-a-zig… ah?

It’s getting late—almost 8:45 a.m.—and the crowd thins as people make their way to their morning shifts.

Mischief makers hand out intention cards: well-designed cardstock squares emblazoned with the question “How will you stay wild?” and a quote from Victoria Erickson. Erickson is a creative writing coach, holistic health guru, and a “grounded idealist,” according to a cursory Google search.

“Give yourselves a round of applause,” says the emcee. He proceeds to instruct all those remaining to ignore the thin layer of stickiness on the ground and take a seat. “This is our sweat. We did this, we made this.” We read the quote on the back of the intention card in unison before being sent forward into our day.

On the T ride home, we dig our intention cards out of our pockets—“How will you stay wild?” The quote seemed believably magical when read sitting on the floor of a dimly lit club next to a man in a sailor costume. In the light of day, headed to our 10 a.m. sections, the carefully orchestrated wildness of Daybreaker already seems a distant memory. We are left with Britney lyrics ringing in our ears and a deep sense of physical weariness. Now, it isn’t so much a question of staying wild as staying awake.

— Magazine writer Hillary A. McLauchlin can be reached at hillary.mclauchlin.@thecrimson.com.

— Magazine writer Norah M. Murphy can be reached at norah.murphy@thecrimson.com.