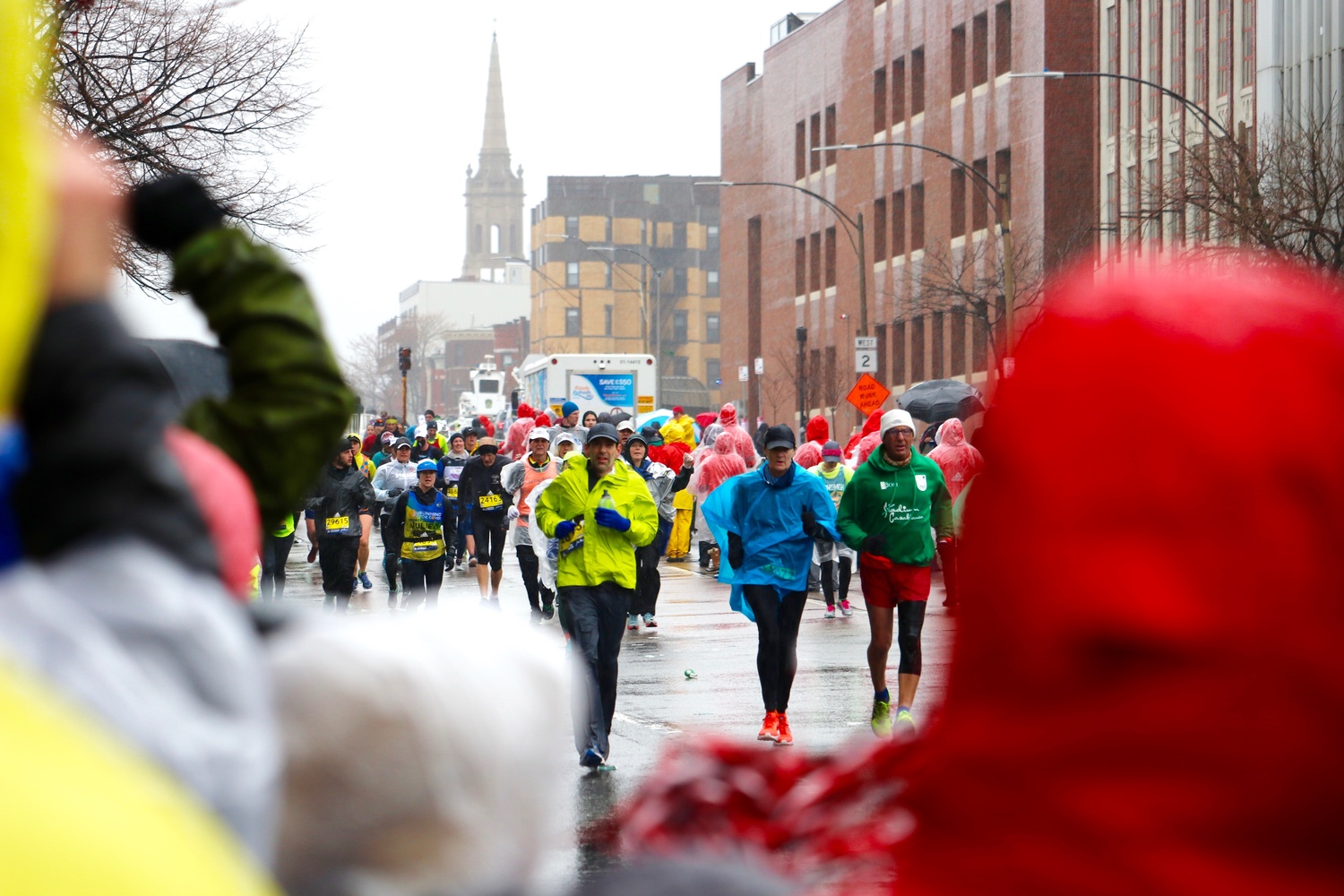 Runners near the end of the Boston Marathon as the crowd cheers them on. By Amy Y. Li
By Nina H. Pasquini and Paul D. Tamburro, Crimson Staff Writers

Founded in 1897, the Boston Marathon is the oldest annual marathon in the world. This year marks five years since the Boston Marathon bombings, which killed three and injured hundreds more. Since the bombings, the race has taken on a greater significance for Boston, becoming a symbol of the city’s resilience. More than 30,000 people ran this year’s race.

Seevak, along with four other college students, ran as part of the Harvard College Marathon Challenge, which raises money for the Phillips Brooks House Association’s Summer Urban Program. Other students ran the marathon independently.

Craig F. Rodgers, a counselor at the Bureau of Study Counsel, said a similar initiative at Tufts inspired him to start the Marathon Challenge. He said he spoke with University president-elect Lawrence S. Bacow, who was president of Tufts at the time, to learn more about starting such a program in 2005.

“Prior to 2005, I saw many yellow jerseys on the Boston Marathon route that said Tufts. And I always, when I would see these Tufts jerseys, I thought it would be neat if Harvard had a presence at the Marathon too. So I spoke with the person who was most familiar with the Tufts program, who was Larry Bacow,” Rodgers said. “So we started a much smaller version of that program here at Harvard.”

Brittany A. Petros ’18 said she chose to participate in the Marathon Challenge as a capstone to her college running career.

“I started running in college,” Petros said. “And I thought that, having spent four years running along the Charles and in Boston, it’d be such a nice way to conclude my running journey at college.”

The rain presented unexpected challenges to student runners—causing some to come up with creative solutions.

“I actually wore racquetball glasses to protect from the rain,” said Jacob N. Russell ’19. “Then my headphones broke because of the rain—and that put a damper on things.”

Seevak also struggled with the weather.

“The worst part during the race was definitely when my fingers were too cold to eat the Welch’s fruit snacks that I’d packed,” Seevak said. “And I took my gloves off and then they were too wet to get my fingers back inside of them.”

Yet despite the physical challenges brought about by the rain, Seevak said the weather actually helped her in the end.

“I think the rain ended up psychologically being a really good thing for me,” said Seevak. “I think when I realized how miserable the weather conditions would be, I was like ‘OK, I need to stop thinking so much about what my time will be, and instead just focus on making the best of whatever the situation is.’”

Russell, who ran despite a knee condition, said he drew inspiration from the encouraging crowd.

“Literally everywhere you go from the very start to the very end there’s people lining the street and just cheering you on trying to give you high fives,” said Russell. “Especially little kids—it’s nice to think that they’re looking up to you, and even though you might be in a world of pain right now, that these kids still idolize you.”