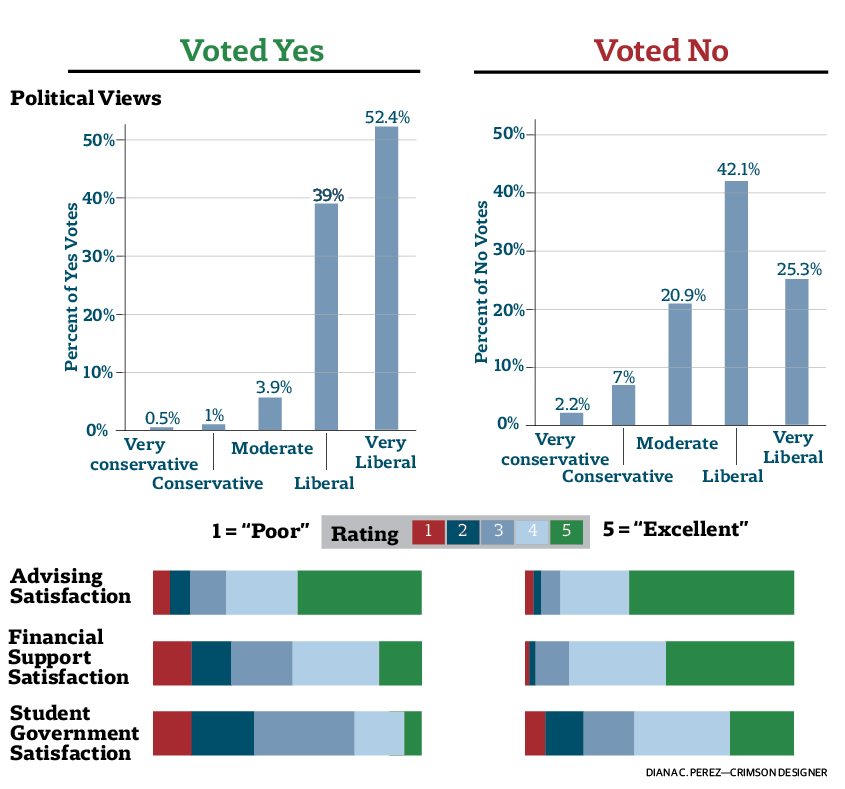 Students who voted in favor of unionization last week were more likely to report feeling dissatisfied with Harvard’s advising and financial support systems, according to exit polling data collected by The Crimson.

Of respondents to The Crimson’s exit poll, students who voted “Yes” were twice as likely as those who voted “No” to rate their relationship with their primary Harvard academic advisor poorly. Pro-union voters were also nine times more likely than anti-union voters to give the University’s financial support the lowest possible score on a scale of 1 to 5.

Harvard’s second unionization election took place on April 18 and 19. The final tally fell in favor of the union—56 percent of students who cast ballots voted to authorize Harvard Graduate Students Union-United Auto Workers to begin collectively bargaining with Harvard on behalf of eligible teaching and research assistants. Over 5,000 students are included in the new bargaining unit, though it is not yet clear if Harvard will negotiate with HGSU-UAW.

The Crimson conducted its exit poll on both days of the election, stationing reporters at the three voting locations in Cambridge, Longwood, and Allston for 78 percent of all hours the sites remained open. Reporters collected exit surveys from 1,295 voters, representing over a third of the voting population.

The 23-question survey asked respondents for their opinions on collective bargaining, politics, and salient campus issues. The data presented in this story has not been corrected for any possible response bias (see methodology below).

In particular, The Crimson’s exit poll asked respondents to rate the quality of their relationship with their primary academic advisor on a scale of 1—“Poor”— to 5, or “Excellent.” Most graduate students work with an academic advisor provided by Harvard throughout their time at the University, often utilizing the advisor as a research mentor.

Students who voted “Yes” reported on average that they feel less satisfied with their advisors—27 percent of “Yes” voters surveyed rated their satisfaction with their advising relationship a 3 or below. Just 13 percent of “No” voters indicated the same score.

Overall, 11.5 percent of total survey respondents rated the quality of their relationship with their primary advisor below a 3.

In a recent Graduate School of Arts and Sciences student life survey, less than 10 percent of respondents expressed concerns about their relationship with their primary advisor.

Of respondents to The Crimson's survey, 61 percent of “No” voters rated their advising relationship the highest score of 5; 46 percent of “Yes” voters did the same.

Asked to report their level of satisfaction with the University’s financial support on a scale from 1 (“Poor”) to 5 (“Excellent”), “Yes” voters reported they feel, on average, less satisfied with the program than their anti-union counterparts. Voters who supported unionization gave the program an average score of 3.2 while voters who opposed unionization gave an average score of 4.3.

For eight of the past nine years, GSAS students received a 3 percent annual increase in their stipends, which Harvard provides to all Ph.D. students. But last year—citing Harvard’s poor endowment returns—administrators announced a 1.5 percent increase. The unusually low stipend increase drew the ire of union organizers, who later argued a union would ensure wage security.

The Crimson’s survey also asked voters for their opinions on the effectiveness of student councils and forums—again utilizing the scale of 1 (“Poor”) to 5 (“Excellent”). Pro-union voters were more likely to report they feel student government is ineffective.

In the run-up to the election, pro- and anti-union groups on campus repeatedly debated how a union would redefine the role of student government on campus.

If Harvard chooses to recognize the union, student stipends and benefits—traditionally the province of student forums like the Graduate Student Council—are expected to instead be negotiated via collective bargaining. In an interview prior to the vote, Summer A. Shafer, an ex-GSC president and former union organizer, said she thinks this setup would benefit students.

“The GSC has been—throughout my time participating—very good at awarding money for conferences and for summer research, for recognizing superb mentors,” Shafer said. “[The union] might actually even make the GSC better, because it’ll force a redefinition of goals and priorities.”

The vast majority of the voting population reported left-leaning politics. Of respondents, 84.2 percent selected either “Liberal” or “Very Liberal.”

Similar numbers of union supporters and opponents identified themselves as “Liberal”: 39 percent of “Yes” voters and 41.2 percent of “No” voters did so.

Of respondents, 20.5 percent of “No” voters identified themselves as “moderate” while just 5.6 percent of “Yes” voters selected the same. Only 1.9 percent of respondents overall reported identifying as “Apolitical.”

The data presented in this story is entirely sourced from the exit poll of eligible voters The Crimson conducted during the two days of the April 2018 unionization election.

Crimson analysis of the raw exit poll data indicated voters in favor of unionization were more likely to fill out the survey than were voters who voted against unionization. Specifically, The Crimson calculated an oversampling factor of 1.32 for respondents who reported voting “yes.” The Crimson’s survey specifically asked students whether they voted in the Nov. 2016 election and, if so, whether they had changed their mind on unionization since the first vote.

Using the responses to these questions, The Crimson calculated the 32 percent oversampling by taking the percentage of respondents who reported they voted yes in both the April 2018 and Nov. 2016 elections (out of all respondents who voted in the Nov. 2016 election and indicated they did not change their minds in the interim), then dividing it by the actual percentage of voters who voted in favor of unionization in Nov. 2016. The Crimson utilized this response bias factor, in addition to a geographic correction that reweighted the data by polling site, to infer that approximately 50.6 percent of eligible voters who cast ballots April 18 and 19 voted in favor of unionization.

The official vote count Friday revealed that roughly 56 percent of those who cast ballots voted in favor in unionization, leading to an overall oversampling factor of 1.23. Unless otherwise indicated, the data reported in this story is the raw data from the survey and has not been corrected for this apparent response bias.