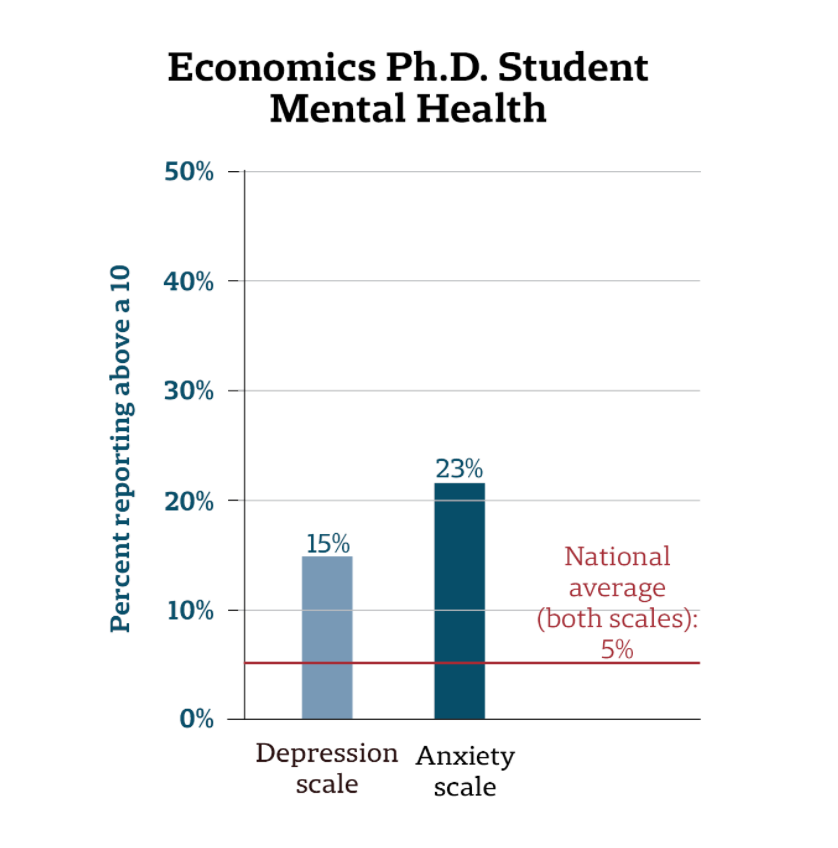 The survey was first released to graduate students in the Economics Department during the 2016-2017 school year. The initial iteration of the survey was solely “for internal purposes” and did not constitute an official research initiative, according to Economics Ph.D. student Valentin Bolotnyy, who worked on the study.

After seeing the results of the survey, several Economics graduate students decided to found a Peer Support Network in the department. The group comprises nine volunteers, all of whom represent different years in the graduate program. The names and contact info of these individuals are made available to every student in the department.

“Grad school’s a difficult time, especially at a place like Harvard where people are very smart and you can feel like you’re struggling and sort of don’t belong, you know that people sort of struggle with these kind of things,” said David C. Martin, an Economics graduate student and Peer Support Network volunteer. “But I think it just made it more salient to people actually seeing the percentage of people who were at risk for anxiety, for example.”

Martin emphasized that the results of the survey are not “official diagnoses,” but said the support group hoped to provide mental health resources in the department and to normalize conversations around mental health.

“We’re trying to provide as many different options as possible for people within the department to feel comfortable talking about mental health issues, so we do sort of regular drop-in hours,” he said. “We have two hours where there’s somebody in person in our room in the Econ building on Wednesday evenings.”

Following the first survey, Paul J. Barreira, director of HUHS, met with students from the Graduate School of Arts and Sciences to design a new study addressing mental health concerns more broadly. The second survey, administered during this school year, included both the same clinical screens and a student-designed portion.

“It’s questions about their environment that either mitigate or exacerbate stress and trouble,” Barreira said in a recent interview.

The results of this survey have not been published, but, according to Barreira, will be utilized as an evaluation tool to assess change over time.

“Because everybody has agreed to repeat the survey, it becomes an evaluation tool. You do something and then you repeat the survey,” Barreira said. “So for Econ, the first time we did this was two years ago and this fall we repeated it. So there’s been two. And this fall, the survey gets to see whether the changes that were made had any effect.”

In the meantime, Martin said the Peer Support Network in the Economics Department will continue to host events and drop-in hours in attempt to reduce stress on campus.