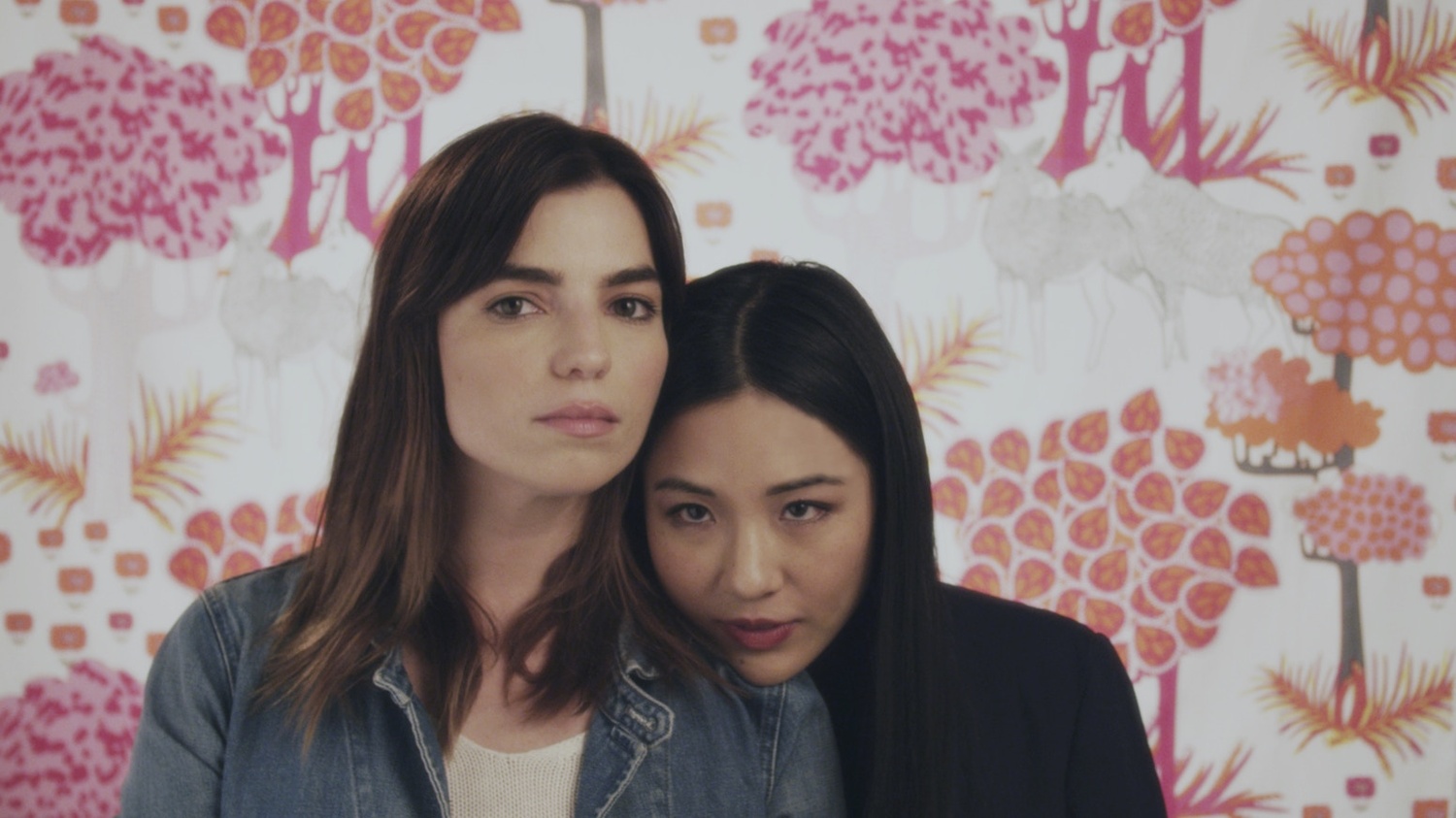 For this mostly unsatisfying bachelorette party cocktail, throw in a dash of ecstasy, unsavory doses of masculinity, and forgettable shots of emotional exposition. In “The Feels,” shown at the Wicked Queer Film Festival in Boston, fiancées Andi (Constance Wu) and Lu (Angela Trimbur), a mostly happy couple by all appearances, embark on a shared bachelorette weekend that unwinds once Lu accidentally reveals that she’s never had an orgasm. Given the film’s character palette, the conceit is understandably dull: The attendees include Josh (Josh Fadem), Andi’s infantile childhood friend with little self-control and an overwhelmingly noxious presence, an endlessly excitable “Regular” Helen (Ever Mainard), manic pixie dream girl musician Kárin (Kárin Tatoyan), and vanilla Vivien (Lauren Parks). Kárin’s random deliverances of her own love songs fail to add somberness to the slowly unraveling relationship, and the patchiness of the film’s soundtrack epitomizes this haphazard nexus of incompatible friends and strangers. The film’s reality-television style close-up interviews, in which the characters share anecdotes and divulge their fears of intimacy, despite their caricatured quirkiness, are the deepest expositions of character in the entire film and honestly explore the misdirections of sexual awakening. But these thoughtful features are not enough to buoy their feeble displays of friendship.

The meandering pace of the film makes it so that Lu and Andi don’t confront the main problems in their relationship—Lu’s inability to voice her own needs, Andi’s mild but yielding self-absorption—until much later. LaMarque demands early emotional investment in a smarmy saga featuring unlikable and loosely connected characters (likability not being a requisite but an at least palatable substitution for depth), but does not reward curiosity with meaningful character development. The characters also never seem to have productive emotional conversations with each other. Josh, unfailingly laddish and blunt, turns on Andi, demanding, “Are you a dead fish in the bedroom?” He assures Nikki (Jenée LaMarque), Lu’s older and recently separated sister, “Your kids are going to get real messed up.” He’s bafflingly lascivious when he takes a pass at her: “I like a woman. I want a woman.” He almost provides a valuable perspective when he criticizes Andi outright, telling her but seemingly more for the audience, who at this point probably can’t scramble together a substantial understanding of Andi’s personality, “You seem to not be aware of anything going on unless it’s easiest for you.” Not to rail against LaMarque’s lack of generosity, but against her bewildering presentation of character, the only male character in the movie is unbelievably stunted emotionally, and even Kárin, during her insightful and self-aware interview, has to speak in an breathless rush that reinforces her portrayal as a hipster ingénue.

At least LaMarque provides, even offhandedly through interviews, insight into the characters, the diversity and complexity of relationships, and the underbelly of shiny romantic narratives—decidedly unromantic sexual awakenings. Vivien recalls how being in the “worst relationship ever” allowed her to understand and to be more herself and fulfill her sexual needs. Nikki recounts how she was taught male reproductive anatomy, but was taught to call hers a “Missy,” which prompts thoughtful reflection on the spectral hegemony of male pleasure in a film about a gay couple. And then Kárin suggests the privilege of pleasure: “I come from a Middle Eastern family. Orgasms don’t exist in the Middle East.”

“The Feels” hashes out Lu’s orgasm issue and all its attendant compatibility questions too easily at the end, in a way that undermines the entire film’s dramatic project. LaMarque doesn’t develop Andi and Lu’s individual personalities until they are forced, at the end of the movie, for practical reasons and by dint of a hasty and spontaneous showdown, to resolve the issue. Fortunately, Helen’s unabashedly outrageous wisecracks consistently serve airy kernels of humor to the audience. Josh hangs a banner featuring stylized renditions of all of the women’s individual breasts, and suggests that everyone feel each other up to see whose are whose. Helen then announces, “Be prepared to be perplexed. I’m wearing a sports bra.” But aggressive quirkiness ultimately doesn’t save this film.