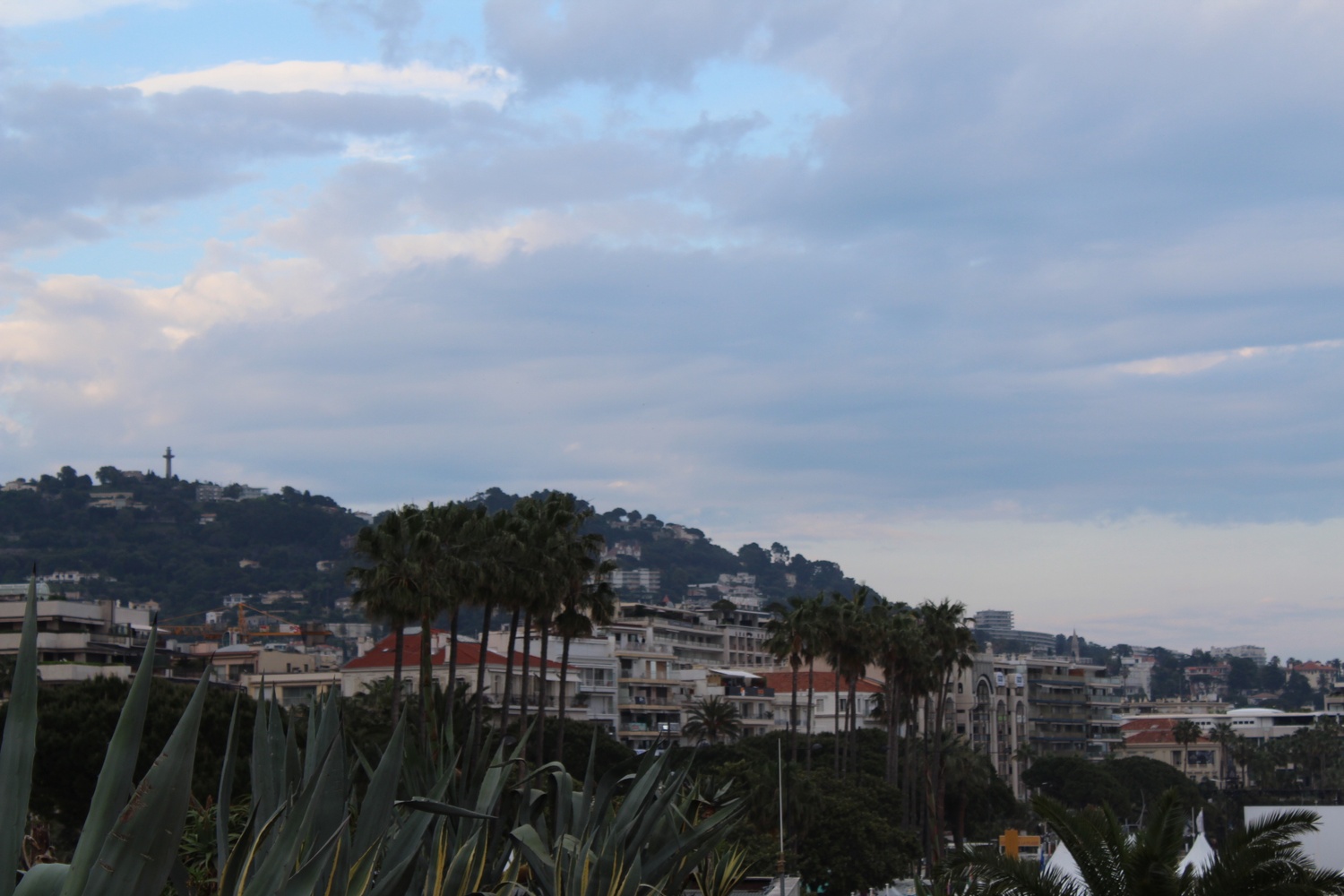 If you asked me what I thought I’d be doing on the first day of Cannes, my answer would have been sipping rosé with Timothée Chalamet on the Croisette and collecting designer-business cards from the Hollywood nouveau riche by the stack, on the prowl for last-minute summer internships. Or maybe I would be glamming up for a glitzy after-party and tottering around in Louboutins, or exchanging numbers with Cate Blanchett and double-cheek-kissing George Clooney. Bises, à la Française! (In all of these visions I’m, like, 20 pounds lighter, super outgoing, and really enjoy piloxing and “superfoods.”)

Instead, I ended up sobbing in a stranger’s bathtub at 10 p.m., hypoglycemic.

Record scratch. Freeze frame. So you’re probably wondering how I got here.

Upon our arrival in the Nice airport at 5:30 p.m., we watched the same four Louis Vuitton suitcases circle Baggage Claim Six until I was willing to admit that my checked bag was probably somehow lost during our transit from London Heathrow to Nice, tragically in checked-bag limbo. Most likely floating aimlessly in the English Channel. Despite what the city of Nice might suggest, this revelation was not, in fact, nice. A gate agent informed us through gritted teeth that we had two options: We could either leave on our free journalists’ shuttle to Cannes, catch the premiere of the opening movie (Farhadi’s “Everybody Knows”), and chance a morning luggage delivery from the airport (which, in all likelihood, would be a total flop (!) since it was le festival and everyone and their cat was waiting for a “missing” luggage. Everyone and their glamorous, purebred cats with their cat-sized Louis Vuitton suitcases). Or we could wait until 8 p.m. for the missing luggage to be delivered on the next flight from London, then hop on the train (which cost no more than five euros, tops) to Cannes around 8:30.

After vividly imagining myself turning up to a red carpet premiere in the clothes in my carry-on (a Harry Styles: Live on Tour T-shirt and sweatpants with HARVARD on the butt), I decide that Mila and I will wait for the luggage, with the full knowledge that we are missing the red carpet premiere of “Everybody Knows.” Sorry Penelope Cruz! Finally, the moment of truth arrives, and after several harrowing moments of cop-outs, the One True Luggage with the rainbow band appears on the conveyor belt, like manna from heaven, on Baggage Claim Six. Miracle of miracles!

With all three hefty luggages in tow, Mila and I finally escape the Sixth Circle of Hell and, after a few directions from a well-meaning gate agent, emerge cheerfully into the Seventh: a convoluted schema of cartoonishly crooked sign-posts toward the Gare St. Augustin. Meanwhile, it’s getting dark, and Google Maps says we’re, like, thiiiiiiiiis close to the station—just cross the highway with perpetually oncoming traffic!

In a death-defying game of Human Frogger, Mila and I cross the highway, fat American Samsonites in tow, all the while continually screaming. Drivers give us the stink eye, as if they’re somehow above sprinting in front of moving vehicles. At last, I can see the pink SNCF about 100 feet ahead, when behind me, Mila calls my name.

A passerby has alerted her that the SNCF workers are all on strike, and there will not be another train to Cannes until 5 a.m. the next morning.

At this point, I’m partially ready to run back to the highway and throw myself into moving traffic, but Mila takes charge and recommends that we call an Uber. It’s 55 euros, but it’s also getting dark and Cannes is miles away, so we board a Peugeot and get whisked off to Cannes, where the romantic Riviera adventure can finally start, in all its rosé-drinking, Chalamet-schmoozing glory. Right?

Wrong. When we get dropped off at the hotel where our Airbnb host works, all the ushers begin stacking our luggage on a bellhop cart and welcoming us to the festival. Context: This hotel is the kind of hotel where paparazzi stake out outside to catch actresses getting into their Mercedes, flanked on either side by security detail. Every visible surface is made of marble. They’re treating us like we’re undercover celebs sporting college gear and sneakers to blend in with the proletariat. When we inform them it’s not a costume, they look confused, alarmed. Who are we, and what are we doing here?

Tension mounts. We’re sitting on furniture that costs more than our tuition. The staff keep nervously glancing at us, as if every time they look away, we might have dematerialized into thin air. But every time they check—damn it—they’re dismayed to find that we are still there.

Finally, the host appears. She looks nervous. Did the staff see us come in with our bags? They did? Oh, god. Keep calm and follow me out of here.

Wondering whether we have accidentally signed up to be accomplices in a heist of some kind, we wordlessly follow her out of the lobby. She turns to face us and holds a key. In very rapid, very confusing French, she instructs us that we must cross a street, then stay to the left. To the left there is a seafood restaurant and an aesthetic shop (“An aesthetic?” Mila repeats in French. “Like... for skin? For nails?” “Aesthetic,” she replies cryptically, as though we should know this already). Keep going. Keep going. And you will see it: the building. Go to the first floor. It’s the apartment that’s right there. On the right. Does that make sense? Do we understand?

Mila and I nod reluctantly, and the host hands us the key. “How should we work out payment?” she asks.

Oh. She seems surprised, but shrugs, and says she’ll see us at home later, maybe around three.

(The website lists the property as an “entire home,” which Mila and I had assumed to mean not a see-you-at-three, cohabiting situation. Her unexpected presence is shock #2.)

Already there are some red flags, but it’s approaching midnight, so Mila and I trudge down the street with our luggage again. Leggy blonde girls in rompers keep passing us, their badges bouncing around like gold medals. Meanwhile I’m sweating again and Mila and I keep exchanging hopeless glances, like, This is it? This is Cannes? Already, it feels like we were misled. I want to file a complaint with the universe: Excuse me, god? I was told there would be Chalamet.

We get to the apartment building (after a brief, strange encounter with some badgeholders who hand us their poorly-designed business cards too eagerly), squeeze into a rickety elevator from the ’70s, and arrive at the first floor expecting to see “the apartment that’s right there, on the right.”

To our right, there are three separate doors. Each door has at least three keyholes. Is this some kind of logic puzzle, some socio-litmus test? We try to wiggle the key into each keyhole, to no avail. We try the apartments on the left. After we try one, we hear the lock click from the inside. Someone thinks we’re intruding.

We call the host several times with the last dregs of our dwindling phone batteries. She does not pick up for five minutes. Finally, on the fourth call, she picks up. Hello? Did you misunderstand my basic instructions? It’s the apartment on the right. On the right!

Mila approaches the door and jams the key into the slot. The door swings open. We hang up, somewhat embarrassed.

The room we discover inside is musty and in disarray. There’s a bed made in the corner, which slightly resembles the pictures on the Airbnb listing, but seems lumpy and uninviting. There’s a weird smell, which I can only describe as hairspray and death. The lighting is ominously dim, and we fumble around for light switches. We turn on the kitchen lights. Dirty dishes crowd the sink. The rest of the room is still bathed in relative darkness.

I notice a lamp in the corner and fumble for a switch. Out of my peripheral vision, I notice there’s another room where the host must be sleeping tonight. Behind me, Mila turns on her phone flashlight to help me find the switch.

And that’s when I see it.

In the bed, I can make out the shape of disembodied pair of legs.

“Oh my god,” I say, barely breathing. “There’s a person in here.” I chance another glance at the darkened room and notice that there are, in fact, two sets of legs. Multiple bodies on beds, unmoving. Actual human corpses? Sex dolls? What the fuck is going on here?

I turn back toward Mila, and can see the visible flit of panic through her eyes. More rapidly than I have ever seen any human being move, Mila collects all of the miscellaneous belongings we have carelessly set down, amassing them into a pile.

In the bathroom, I plug in my phone charger. Mila frantically Googles hotels with vacancies. This is when the events of the past 48 hours, from the lost luggage to the highway running to the sex dolls, compounded by intense and unparalleled sleep deprivation and hunger, finally sink in. I consider myself a pretty emotionally stable person, but if there’s anything that I could justify as a reasonable stimuli for distress, it’s the sight of two sets of disembodied humanoid legs. So I do what any rational person does when they are quarantined in a stranger’s bathroom in Cannes: I start sobbing.

Luckily, Mila is level-headed enough to calm me down. We start telephoning relatively cheap hotels. They’re all completely booked, or they have one suite left, which costs 1000 euros per night. Another costs 800. Affordable! So affordable! A bargain! A real steal!

Finally—blessedly—a hotel seven minutes away says they have a vacancy for two adults. It’s 400 euros a night, but at this rate, we have already been in an apartment that feels vaguely like the set of “The Exorcist” for too long. We book the room. We hightail it out of there and leave the key under the mat.

Once in the hotel room, we decompress. I cry a little more, residually, out of sheer relief. We both call our parents. We book a new hotel room for the rest of the stay, which is cheaper than 400 euros per night, but not by much. But after the harrowing ordeal we have endured today, we are willing to bite the bullet and drop some cash.

So in short, Mila and I have been in Cannes for approximately 10 hours, and we have not seen a single movie, much less met any celebrities. But at least, we are happy to inform you that we are no longer cohabitating with sex dolls, which has set the new bar for the quality of my travel. If there is no sex doll encounter, I will have had a really solid vacation.

Tune in tomorrow for the next installment of Cannes Par Jour! Bizarrely, and I never thought I would say this, but hopefully, it will be completely devoid of sex dolls. (We make no promises.)