‘A Leader of Growing Stature in the Art World’: Sarah Lewis Makes Her Mark 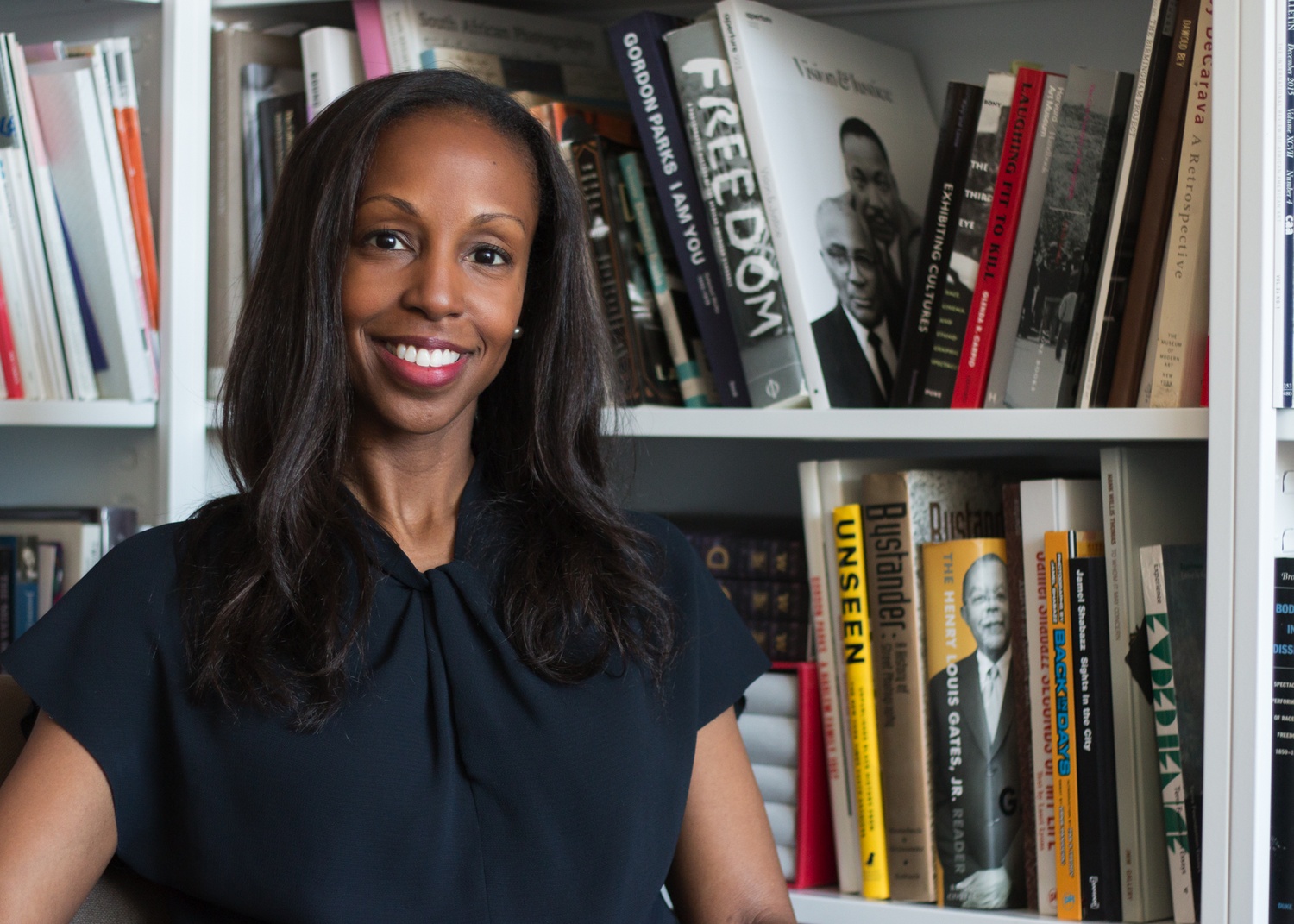 Sarah Lewis is an Assistant Professor of History of Art and Architecture and African and African American Studies at Harvard. By Caleb D. Schwartz

Sitting on the desk of assistant professor Sarah E. Lewis '01 in the History of Art and Architecture department is a black-and-white family photo of her grandfather, Shadrack Emmanuel Lee, as a teenager. Lewis, who views much art and photography in her work, singled out the image as the most precious to her.

Lewis’ grandfather was expelled from high school in 1926 for asking why the textbooks neglected to include the accomplishments of non-white figures. Turning to art and jazz, Lee never finished high school.

Close to a century later, Lewis cites her grandfather as a source of inspiration for her current work. Lee chose to pursue art rather than politics or activism, while his granddaughter currently explores the connection between art and social justice.

Outside of the classroom her impact is also widespread. Not yet 40, she has kept busy, authoring the book, "The Rise: Creativity, the Gift of Failure, and the Search for Mastery," which has been translated into seven languages. She guest edited an issue of Aperture magazine entitled "Vision & Justice," which received the 2017 Infinity Award from the International Center of Photography. She also served on President Obama’s Art Policy Committee, and this spring, she helmed the New Yorker Photo Department’s Instagram account for four days.

“I grew up right in heart of midtown Manhattan,” Lewis explained. “So that became my normal and I think what has created and sustained the level of energy I like to keep around me.”

Despite balancing a number of commitments outside the classroom, Lewis has attracted attention for her undergraduate teaching. This semester, 120 students showed up for 12 available spots in one of Lewis’ seminars during shopping week.

For her Picturing America seminar, Lewis took her students to Washington D.C. this semester to visit the newly constructed Smithsonian National Museum of African American History & Culture. Hannah Hardenbergh ’19, a history and literature concentrator who took the course, recalls meeting and Skyping with the artists featured in the class.

“She is really dedicated to the work that she’s doing,” Hardenberg said. “Honestly, she’s made me think about art a little bit differently and has inspired me to consider academia and art history.”

Lewis said her Vision and Justice Gen Ed course inspired her Aperture publication in 2016. Both the class and the publication focus on the intersection between culture, art, and social justice, an area that Lewis believes is largely “underexplored.” Lewis said she was surprised at how much attention the Vision & Justice issue received, which is now in its third print run.

“[Vision & Justice] has become the framework for thinking through this nexus and the relationship between artistic production, culture, and justice,” Lewis said. “It looks at effectively the counter narrative that artists of color had created to offer an unseen sense of dignity and humanity and interiority regarding black life in the twentieth and twenty-first century."

The Vision & Justice Aperture publication features photographs from both African American and non-African American photographers coupled with commentary by present-day scholars, writers, poets, playwrights, and curators. The publication includes an essay on Frederick Douglass by Henry Louis Gates Jr. and a dialogue between cinematographer Bradford Young and his colleague Ava DuVernay, director of Selma and several other films.

Mirroring Lewis’s own publication, one assignment in Lewis’s Gen Ed Vision and Justice course asks students to assemble their midterm essays into a class book. Each student selects an image, linking it to a Supreme Court case of their choosing. Aperture magazine then publishes five of Lewis’ students’ essays each year as an expansion of the Vision & Justice issue.

"That’s one way in which it’s really a living document as well,” Lewis said.

Lewis is proud of the diversity in her classroom, noting that the students in her Vision and Justice class “showed no racial majority.”

"When you question whose identity is normalized through that community, when everyone’s identity counts in equal measure, there’s a kind of bond and a fellowship you can create,” Lewis said. “That’s really been one of the most rewarding parts of teaching the class."

Students also grapple with Harvard’s own history. Vision and Justice students study the Zealy daguerreotypes, a controversial series of photos of slaves taken at the behest of Harvard professor Louis Agassiz in 1850 in an effort to bolster polygenesis theory. Lewis said the Harvard Art Museum, where the daguerreotypes are now housed, stands on the land where Agassiz’s house used to be.

“The history of photography is weaponized from the start. It’s used as a tool to sort of honor human life through the portraits we all celebrate, but also to denigrate it,” Lewis said. “And [my students] are able to see the way in which it became a tool for racial science through this class."

Nick T. Wyville ’20 took Lewis’ Vision and Justice last semester. He praised the course, saying that he came away with a deepened understanding of history as well as a newfound ability to analyze and interpret art.

“I would say that I learned a lot about the contemporary implications of that art, not only the art that we studied, but the implications of what we see in our visual world today,” Wyville said.

Wyville, inspired after taking Lewis’ class, took a road trip through his native state of Alabama. He saw both confederate and civil-rights-movement monuments and viewed this “dichotomy” of the South in a new light.

"I thought there must be something written about the connection between art, race, and justice, and at the time, there really wasn’t much,” Lewis said.

An ambitious undergrad, Lewis began working on her book "The Rise" while at the College. She also was involved with Harvard Model Congress and the Black Arts Festival. As a senior, she was awarded the prestigious Marshall Scholarship.

"As soon as I stepped on campus the first time I visited [Harvard], I felt as if anything was possible. Any interest you had could be supported,” Lewis said.

Even with her busy schedule, Lewis found time for fun—and can be thanked for beginning the YardFest tradition.

“There was no live music here at the time. The only thing we had was the Primal Scream. That was the only kind of valve release we had as a collective,” Lewis said. “I created something called the Harvard Concert Commission, with three other friends, which has now become YardFest apparently.”

‘A SCHOLAR WITH EMOTIONAL INTELLIGENCE’

Lewis has worn many hats besides that of teacher, including those of author and curator. "The Rise" examines the “improbable foundations of the path-breaking, creative, innovative works."

"The bridge between "The Rise" and my current work has to do with a question I identified at the end of writing "The Rise." "It’s effectively this: where would we be in society without the arts getting us to overcome collective failure?” Lewis said.

When asked about what research she is most proud of, Lewis pointed to the work currently on her computer.

"When a musician was asked once what his favorite work was, he said, and I feel the same way, always the next one. I’m most proud of what I think is to come,” she said.

Suzanne P. Blier, one of Lewis’s colleagues in the History of Art and Architecture and African and African American Studies Departments, advised Lewis when she was an undergrad at the College. Blier said Lewis has always been “wonderfully thoughtful” and “incredibly warm.” Having known Lewis for many years, Blier finds Lewis’s “emotional intelligence” particularly striking.

“She’s one of the smartest people I’ve ever met in terms of what people call emotional intelligence, how you deal with the world around you,” Blier said. “I also sense that she’s one of those great people who over the course of the time since I first knew her has had such an array of experiences. She wears those, she carries those, engages those, a whole set of experiences which have enriched her life.”

Blier added that Lewis was the “most stylish person in class” as an undergrad and that she continues to be the most stylish today.

Lawrence D. Bobo, chair of the Department of African and African American Studies, praised Lewis for her contributions to the faculty.

“She is a leader of growing stature in the art world, convening scholars to think about art in social change efforts and the fulfillment of democratic ambitions,” Bobo wrote in an email. “The African American experience and contribution has, of course, profoundly influenced art worlds and our national culture. Sarah is bringing all of that richness to Harvard with a special insight and ingenuity all her own.”

This story has been updated to reflect the following correction and clarification:

A previous version of this story incorrectly indicated Sarah E. Lewis '01 released her Aperture publication in 2017. In fact, she released it in 2016.