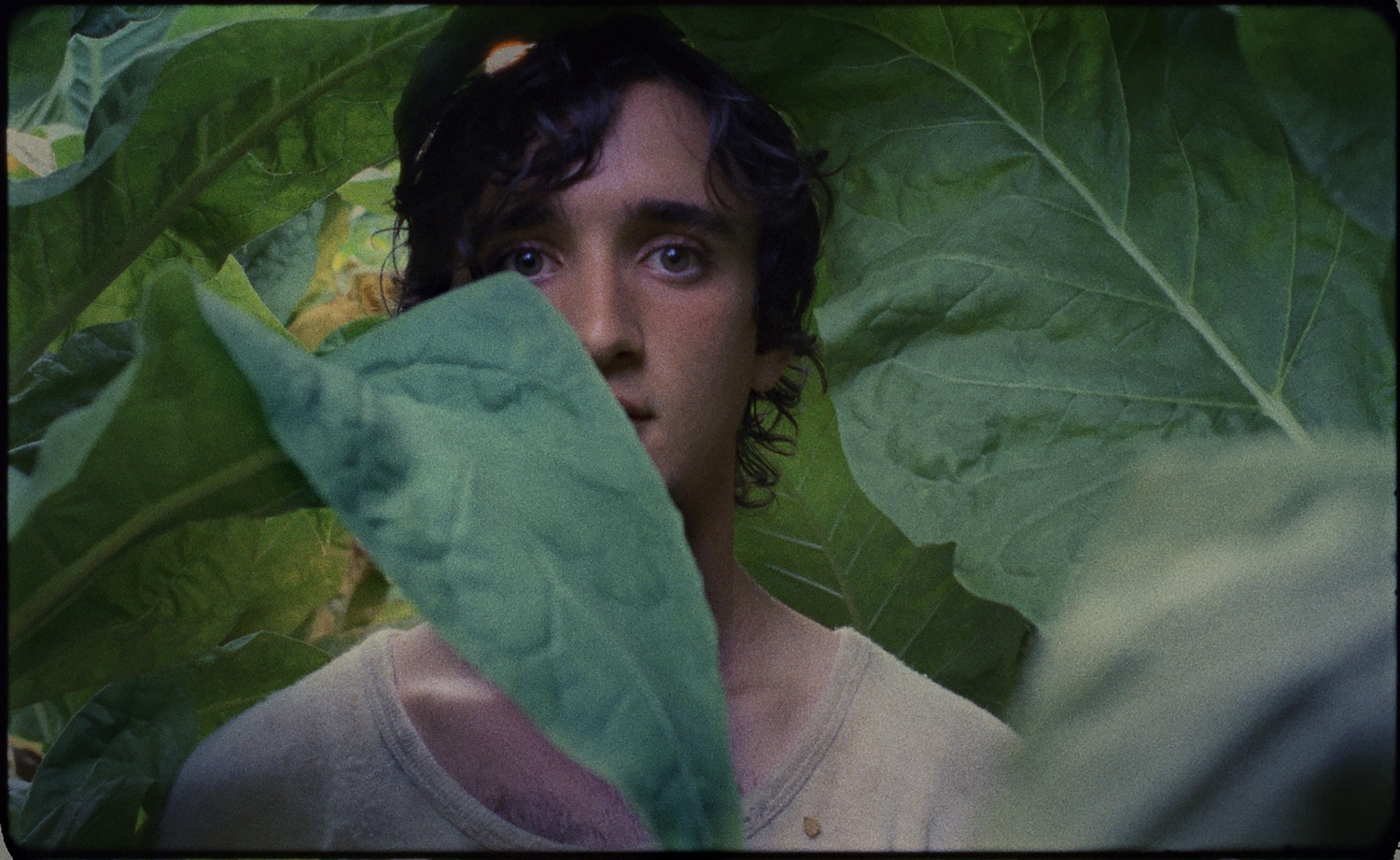 “Lazzaro Felice” (“Happy as Lazzaro”) is a mythological retelling loosely based on the true story that took place in Inviolata, Italy, where one Marquise Alfonsina de la Luna (Nicoletta Braschi) served as a monarch over workers held without payment on an undocumented tobacco plantation. In this version of “The highly illegal events that took place on the picturesque, bucolic land of Inviolata, the workers range from old grandmothers to babies, an uneducated population of 54 that does not know aspire to anything but unpaid work, foreseeably for the rest of their lives. Tancredi (Luca Chikovani), the Marquise’s eldest child, is a privileged brat desperate for city life. In another one of his antics, he forces the too good peasant Lazzaro (Adriano Tardiolo) to help him fake his own kidnapping, appropriating his inferior’s favorite hiding spot. Tancredi’s “kidnappers” ask for ransom, money the young man will take with him to start over once in the city. His mother, disappointingly used to his antics (he once pretended to have leprosy just to spite her), does not buy it—but his naive sister Teresa does, launching the de la Luna estate into a predicament that transcends space and, for some, time. Rohrwacher’s fifth feature film is a testament to her directorial talent, her visually stunning work as mythical as the tale it depicts.

“Lazzaro Felice” is a tale that—what a surprise!—centers on the character of Lazzaro. The young man is frustratingly innocent, obedient to a fault, and that’s the point: His dough eyes glow, his gaze piercing through the blissfully blank expression in permanent fixture on his face, suggesting a mindlessness that is in fact just pure docility: “Lazzaro, are you staring into the void?” asks his fellow servant; “Look what an honest face,” observes another. When Lazzaro is asked to sign a fake ransom letter with his own blood, Tancredi too cowardly to do it himself, Lazzaro does not hesitate to take his place in the act, indoctrinated by the brainwashing de la Luna has inflicted on their slaves and even themselves. In what becomes an alternate universe for Lazzaro, he aids robbers in stealing from the very estate he unknowingly was forced to help maintain. His naïveté is unrealistic, exasperatingly immovable, opening him up to the manipulation imposed on him. It is Tancredi’s that is the most impactful for Lazzaro, his dedication for the spoiled child solidified by Tancredi’s insistence that they are half-brothers, family that they will never be, but an ideal that Lazzaro somehow buys into. “You’re blocking the sun,” Tancredi warns Lazzaro. “A half brother would never do that.” Lazzaro isn’t supposed to be a realistic character because he can’t be: He transcends the laws of the universe, no doubt an allusion to the biblical saint that is his namesake, an unchanging fawn who inadvertently thrusts himself in a pack of wolves.

In “Lazzaro Felice,” mythological imagery abounds—there is, literally, a wolf whose lore is central to the film’s turning point—the narrative’s two parts mirroring the cinematographic evolution from the first into the second half of the film. Rohrwacher makes sure to juxtapose two sets of two starkly different worlds: the delicately pastoral and the harsh urban, and the real and folkloric. The plantation’s lush green fields are bathed in blinding sunlight so bright it’s nearly hallucinatory (perhaps foreshadowing what many of the characters ironically feel towards the last half of the film), a stark contrast to an unnamed Italian city’s grim architecture (which, despite the film’s title, Lazzaro’s psyche comes to mirror), in which the second half of the movie is set. The reality the de Lunas and their indentured servants reside in is one Lazzaro initially thrives in, his endlessly loyal compliance making him prime for the forced labor he is born into, but his ethereal mythos makes him unsuitable for the reality that leaves him behind for—spoiler alert—decades.

The film’s timelapse is one that plays with life and death, with what is real and what is not, with what we see and what Tancredi sees—because for Lazzaro, seeing is not believing. His experiences in the city do not disillusion him; though he yearns for a return to the nature he thrives in, he cannot adjust to the new life he has been given. Part white knight (“we have to fight with [my mother] like knights of old,” eggs Tancredi), part Ulyssian hero, part martyr for a return to a reality he has been displaced from, a life that no longer exists, Lazzaro has an ingenuousness that is inviolable, even outside of Inviolata. It is thanks to Rohrwacher’s artistic dexterity that “Lazzaro Felice” circumvents the easy misalignment of myth and reality, belying a misery that manifests in the single tear that trails off Happy Lazzaro’s face.