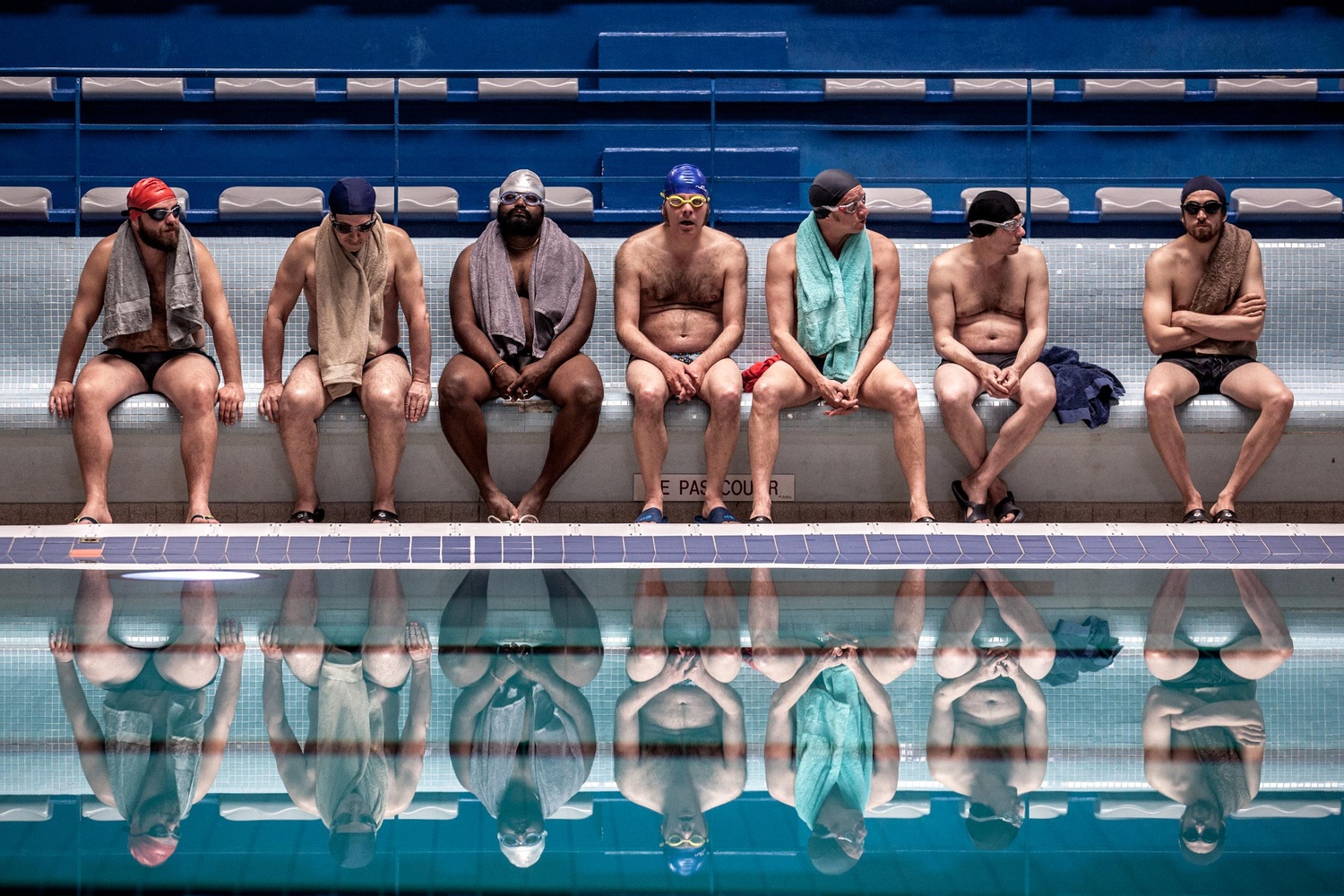 Meet Bertrand (Mathieu Amalric): He’s been unemployed for two years, sprinkles his antidepressants in his cereal, and will not be “playing Candy Crush on the couch,” though his daughter says otherwise. When he tries and fails yet again to acquire a new job—predictably, after spending a couple hours playing Candy Crush on the couch—he makes an odd decision that he hopes will take his life in an entirely new direction by joining a male synchronized swim team. “Can you swim?” asks the team’s coach, Delphine (Virginie Efira). “I don’t know,” he says. Despite his utter lack of qualification, he makes it onto a team of several other equally unqualified men. Together, they pool together in Gilles Lellouche’s latest feature film, “Le Grand Bain” (“Sink Or Swim”), a gratifying comedy that finds its heart in the midst of several midlife crises.

Part synchronized swimming training practice, part group therapy session, the group of aging, out of shape, and hopelessly dedicated men make an unexpectedly supportive and uproarious—if not unoriginal—party. When Bertrand initially joins them, he finds comfort knowing he is free to be the loser he feels he has become, but he’s not the only one with problems. “You think you have a monopoly on depression? It’s got all of us,” says Laurent (Guillaume Canet), the group’s brooding, angry cynic.

The Seven Dwarves to Delphine’s brutal Snow White, four of whom are at the center of the film, the men feed into stereotypes that don’t fall into tropic caricatures thanks to their mostly nuanced acting. First, we have Laurent, who takes his own internalized pain—he hasn’t visited his senile mother in a while, likely because she’ll reach a breaking point in her interaction with him where she’ll goes from an appreciative to hateful, abusive mother—out on his family, the effects of which manifest in his son’s developing stammer. Next is charismatic Marcus (Benoît Poelvoorde) who, with entrepreneurial aspirations “like Michael Douglas in ‘Wall Street,’" can talk himself out of almost anything, except for the bankruptcy he will yet again have to file for in order to save his dying pool-selling business. Quiet lunchman Simon (Jean-Hugues Anglade) is still trying to follow his impossible dream of becoming a rockstar, despite the discouragement everyone—especially his daughter—gives him. Thierry (Philippe Katerine) is the caring clown, whom Marcus claims is still a virgin despite the dates he “tries” to set him up on.

The cast, stereotypically melodramatic in some parts, charmingly sympathetic in others, achieve the latter effect best when they riff off each other, individually crucial parts to their mostly wholesome whole. Their understated performances feel natural—the tears in Laurent’s eyes as his wife and son leave him more believable than not, the growing strain on Simon's relationship with his daughter visible in the tightness of his face—and in spite of their differences, they come together to support one another in their respective times of need. When the man Mathilde is in love with calls her out on her stalking, for example—he has a wife and baby! He never loved her!—the men jump in front of her like dogs snarling at a trespasser, ready to protect their vulnerable owner at all costs.

Their loyalty is endearing, like that of hens blindly following their mother—literally. Despite being adults, the grown men act like children to the point of absurdity, their actions belying their age but salvaged by Ahmed Hamidi, Julien Lambroschini, and Lellouche’s occasionally overwrought but nevertheless witty screenplay. Three members of the aged brat pack decide to steal swimwear and gear instead of paying for it, get caught and are forced to pay an exorbitant fee, and neglect to tell Bertrand the outcome. Believing he is still the getaway driver, he crashes his car into another. In another attempt to swindle his car insurance company, Marcus sets fire to the company van, not having remembered that he cancelled his insurance plane because it was a “waste of money.” These blunders warrant the many laughs they elicit, but the characters’ unnecessarily puerile naivete feels too easy, their lives too in shambles for them to risk further worsening it.

The ensuing catastrophes constitute the mostly organic comic buildup to the show’s climax, when the self-dubbed “Team France” enters a national synchronized swimming competition. And of course, while they physically train for the competition, breaking their bodies under Amanda (Leïla Bekhti)—Delphine’s temporary, much harsher replacement—their emotional development mirrors their growing strength, enchanting if not predictable. “They look like they’re happy,” says Bertrand about the men, before having been unofficially welcomed in, to which Laurent unoriginally replies: “Looking isn’t being.” By the end, at least, they are, in some regard even if temporarily, and it’s that happiness that trounces the film’s inconsistencies in a successful splash of an unlikely comedy. Despite the film’s contrived denouement and the fact that most of Team France’s real problems have yet to be solved, its success is something the middle-aged men, in all their unconventionality, earns with their blood, sweat, and chlorine-induced tears.