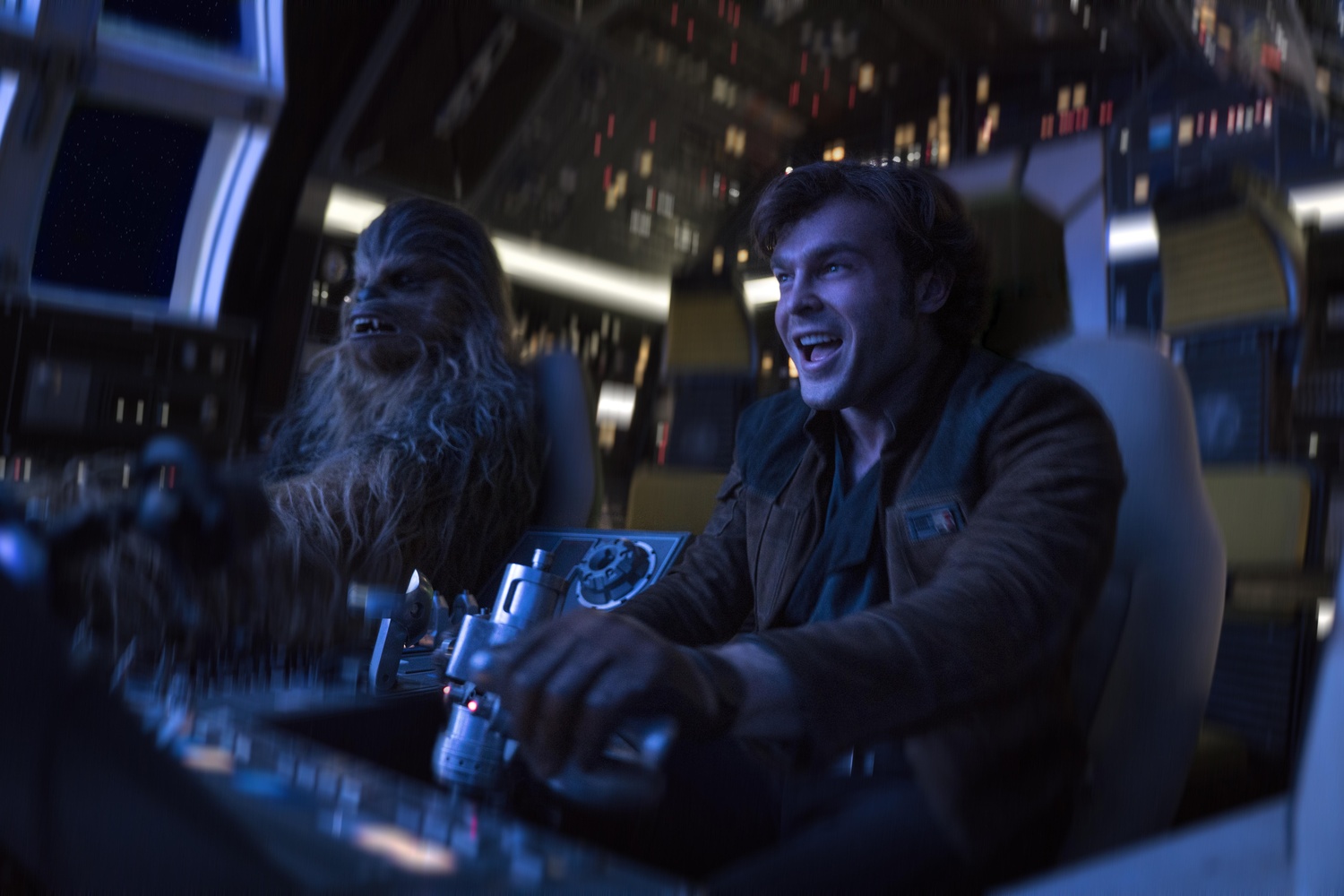 Alden Ehrenreich stars as Han Solo in "Solo: A Star Wars Story" directed by Ron Howard. The film premiered Out of Competition at the Cannes Film Festival. By Courtesy of Festival de Cannes
By Caroline A. Tsai, Crimson Staff Writer

There are few characters in the fictional universe as beloved as Han Solo, Harrison Ford’s devilishly handsome, rogue pilot with a sharp mouth and a mind of his own, even before he was delivered full-fledged to Mos Eisley Cantina proverbially ready to shoot first.

Temporally located somewhere before the original trilogy and perhaps after or sometime during the prequels, the film follows Han Solo (Alden Ehrenreich) on a fast-paced adventure journey. Growing up on the rough and tough streets of Corellia, where he fights for survival alongside his girlfriend Qi’ra (Emilia Clarke), Han embarks on a short-lived military stint in a muddy warzone, where he meets a motley group of mercenaries. Tobias Beckett (Woody Harrelson) leads a (largely expendable) group of soldier misfits, including Val (Thandie Newton) and four-armed alien Rio (voiced by Jon Favreau). Along the way, Han meets amiable Wookie, Chewbacca (Joonas Suotamo), and smooth-talking gambler, Lando Calrissian (Donald Glover). Han joins forces with his new team on a mercenary expedition to procure Coaxium for the nefarious syndicate Crimson Dawn, led by the ruthless Dryden Vos (Paul Bettany).

Han Solo was never meant for greatness, and neither is “Solo,” which likely won’t displace the reigning fan favorite movies, but won’t rank among the worst films of the franchise, either. (Ahem, Jar Jar Binks.) Like Lando’s favorite card game, Sabacc, “Solo” is Disney and Lucasfilm’s relatively risk-free gamble, which ought to tide fans over until the next installment of the sequel trilogy hits theaters in 2019. “Solo” doesn’t exactly hold muster to the sequel trilogy, but maybe that’s a flawed comparison, apples and oranges: While the sequels carry a particular weight, tasked with propelling the trilogy’s A-plot into light speed, spin-offs are sightseeing routes, the fun detour onto a neighboring planet. The end result is a flimsily fun film with an inability to take risks, plus its relatively low stakes—but what it lacks in substance, it makes up for with a magnetic leading man and fan service.

If “A New Hope” is Luke Skywalker’s origin story, then “Solo” is Han Solo’s: Part romance, part thriller, and 100 percent space adventure joyride, “Solo” is a return to Star Wars’ roots, with some new territory added in the mix. With Ford out of the picture (now about 40 years too old for the role he originated in 1977), Ehrenreich had big, charming shoes to fill. Luckily, he’s the right man for such a finicky and high-pressure character sketch: With old-school Hollywood charisma and a signature smirk, he steps into the role of Han Solo with gusto, without trying to top Ford. (Which, let’s face it, would be impossible.) Ehrenreich, despite earlier rumors of onset problems mimicking Ford’s original portrayal, has already been praised as “the real deal,” and for good reason. His Han Solo is “a great pilot and great driver,” cocky in the face of danger, yet vulnerable and even romantic when it counts. He recognizes injustice and calls it like he sees it: “It’s their planet,” he says defiantly, to a military superior. “We’re the hostiles.”

Yet Han insists he’s nobody’s savior, despite what heroic tendencies happen to fall in the way of his antics. “You’re the good guy,” Qi’ra tells him poignantly, in one scene. While the original trilogy’s Luke or Leia might have agreed, Han shakes his head. “No,” he says. “I’m really not the good guy.” That’s what Ehrenreich captures in Han, what made the character so appealing to begin with: In a fictional universe vexed with moral duality, with the struggle between the Republic and the Empire, dark and light, Han Solo is the hero who wants to be the anti-hero, the pilot who wants to fly solo but secretly needs a fleet.

Ehrenreich’s performance hits the mark, but his supporting actors fall a little short. It’s generally hard not to view the side characters as completely expendable, since Howard does not acquaint them with his audience very much or for very long. And all things considered, the stakes are very low. Han, Chewbacca, and Lando’s original appearances in the 1977 and 1980 installments of the original trilogy ensure their survival. The others—Beckett, Val, Rio—don’t stick around long enough, or simply don’t matter enough, to warrant much emotional investment in their fate.

Clarke’s Qi’ra is one-note, as far as love interests go; she’s believably in love with Han for the first five minutes, absent for the next 20, and then ethically ambiguous in an uninteresting way for its remainder. A lack of context about her backstory comes at the detriment of her character development: Her wrist bears a brown tattoo of a cryptic symbol, one that suggests—small spoiler alert—some kind of professed allegiance to Crimson Dawn. She alludes to having done “bad things” to get ahead, and the twist ending clarifies some of it, but the lingering ambiguity renders Qi’ra relatively unimportant. She seems to be a reminder of the ways in which the Star Wars franchise is unkind to its women, imprisoning them in gold bikinis and killing them off in childbirth while their husbands are made into Sith Lords. Emilia Clarke’s Qi’ra gets more or less the same treatment, save for a few action sequences concentrated at the end: Mostly there to try on Lando’s capes or look pretty in floor-length dresses, her only conversation with another female character inevitably shifts to Han (Bechdel test, who?). “What are you going to do about your little problem?” teases L3 (voiced by Phoebe Waller-Bridge), Lando’s droid. The real question is, do we really care?

“Solo” suffers from the same pitfalls as 2015’s “The Force Awakens,” the first of the rebooted trilogy. “The Force Awakens” demonstrated a remarkable reluctance to stray from the franchise’s status quo, at the risk of upsetting its avid fandom. But like with “The Force Awakens,” which symbolized the franchise’s great return, it almost doesn’t matter. “Solo” is a film for the fans and not the critics, full of Easter eggs and winks at the audience: meeting Chewbacca, piloting the Millennium Falcon, making the infamous Kessel Run (in 12 parsecs, no less). Like the best origin stories, “Solo” is about the man and not the myth, the person and not the particulars. And with two more films slated for production and a $175 million-projected opening Memorial Day weekend, it would be safe to have a really good feeling about this one.