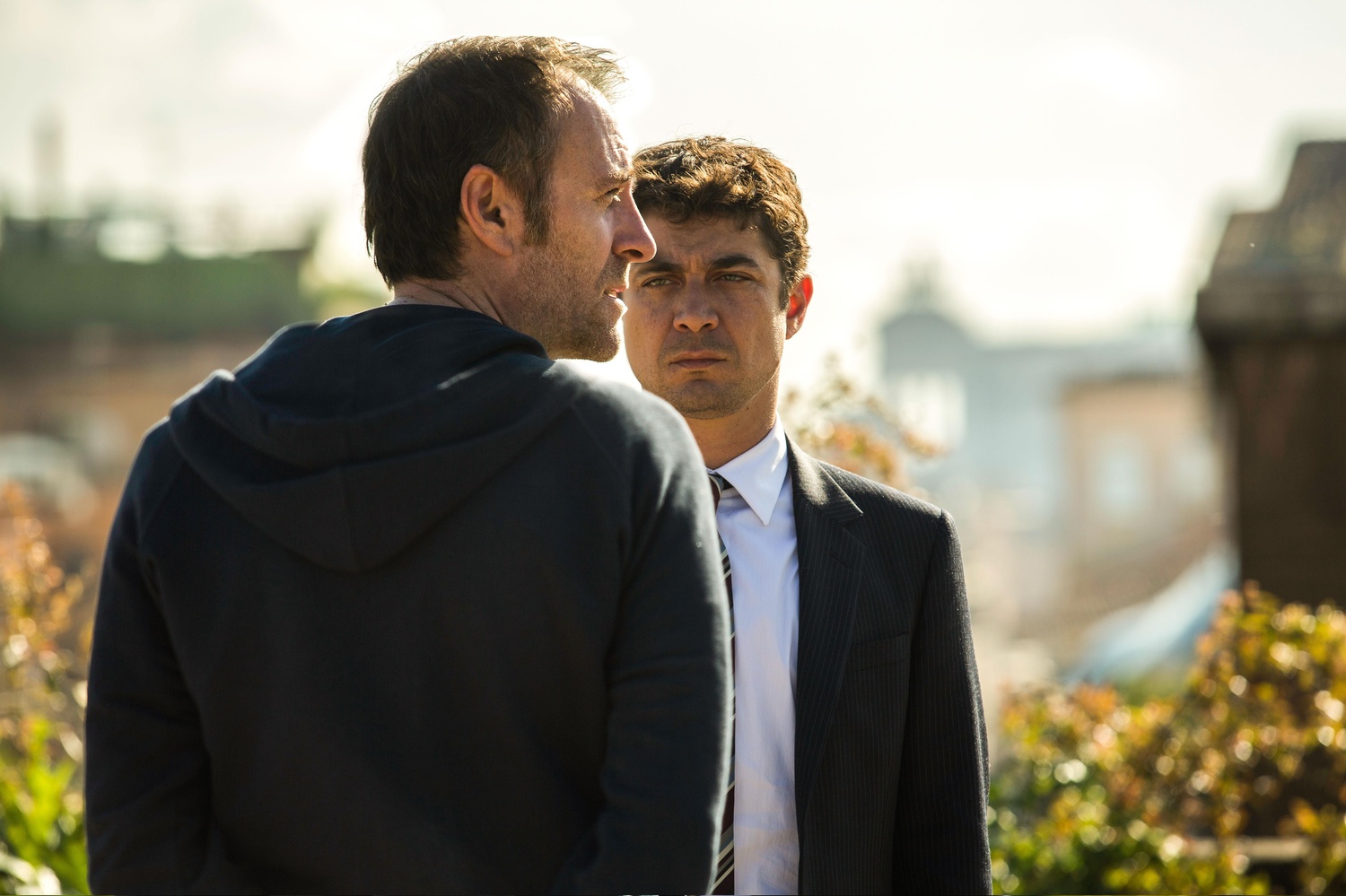 Ricardo Scamarcio and Valerio Mastandrea star in "Euforia," directed by Valeria Golino, which premiered at the Cannes Film Festival, 2018. By Courtesy of Festival de Cannes
By Caroline A. Tsai, Crimson Staff Writer

Middle-aged Matteo (Riccardo Scamarcio) and his older brother Ettore (Valerio Mastandrea) lead very different lives: While Matteo, in the business of artistic restoration, self-medicates with booze and lines of coke, Ettore, a schoolteacher, suffers tumultuous relationships with his estranged wife, Michaela (Isabella Ferrari), and 30-year-old girlfriend, Elena (Jasmine Trinca). However, when Matteo learns that his brother Ettore has been diagnosed with terminal brain cancer, he hides the news of the diagnosis from Ettore and the rest of their family, attempting to spare his brother’s sadness and forestall the act of mourning. But Matteo’s attempts to keep Ettore from discovering the truth about his own mortality catch up to him, and he quickly finds himself entangled in the messy turmoil of Ettore’s personal life. Meanwhile, Ettore grows resentful of his brother for holding the upper hand in literal matters of life and death, the way he throws money around carelessly to assert his status.

“Euforia,” which premiered as part of the Un Certain Regard category at the Cannes Film Festival, could have been an intense family drama about the ethical implications of handling terminally ill patients or the bonds that hold brothers together. But instead, Italian director Valeria Golino turns it into a bloodless pseudo-comedy that handles its very serious subjects with flippant, misplaced humor and turns its characters into tropes whose respective redemptive arcs feel emotionally unmerited, especially by the film’s supposedly cathartic conclusion.

Just why anyone does anything in “Euforia” is a mystery: Characters act without real motives and behave, in all frankness, like petulant children. Matteo’s insistence on keeping Ettore in the dark about his own illness, his constant dishonesty to both of Ettore’s romantic partners, his insouciance about money from his luxury designer clothes to his playboy penthouse apartment—there’s very little that suggests he’ll compensate for his selfishness and amorality, so it’s unbelievable when he does. The same is true of Ettore, whose illness turns him sullen and grizzled, and who essentially turns a blind eye to his dual role as caretaker, as a father to Andrea and as a schoolteacher, although certainly more excusably than his brother. Ettore’s wife, Michaela, is frequently weepy, or as Ettore himself describes her, “vacuous and shallow.”

But it’s more than the characters themselves that make “Euforia” hard to watch, in the worst way; it’s their interactions with each other, which are almost always tonally incorrect. Matteo and Ettore’s arguments toward the end of the film grow particularly vicious—Ettore hurls a gay slur more than once, while Matteo snaps, “When are you going to die?”—without any obvious resolution. It would have been fine—chalk it up to realism for realism’s sake, depicting family feuds in their acrimonious reality—had Golino not tried to capitalize on their fraternal love later, reaping the benefits of a seed “Euforia” does not properly sow. There isn’t any impetus for making up, yet it happens anyway, as if the characters know the film is approaching a two hours’ runtime and they ought to wrap up the still-unresolved conflict.

The ethical gray area at the center of “Euforia”—whether Ettore ought to know that his brain tumor is not, as he assumes, a benign cyst, and that his days left are dwindling—is often treated as a comedic impulse, without the appropriate gravitas. Sometimes the comedy is warranted, even effective; for example, the moment in which Matteo makes Ettore leave their shared hotel room in the cold, so he can entertain a male guest is genuinely humorous (“Take the blanket,” Matteo insists, pushing him out of bed, and Ettore looks across the street to see a store full of figurines of the Virgin Mary). But other moments indicate that “Euforia” is funny in the wrong places, at the wrong times. The moment in which Matteo and Ettore engage in a bitter back-and-forth on the rooftop, one that ought to be given its proper sobriety, is punctuated by a dead fish landing from out of the sky, dropped unceremoniously by a passing seagull. It’s emblematic of “Euforia”’s failure to embody the genre it attempts to be (presumably, tragicomedy). Golino’s attempt to pinpoint the emotional heart of a tragedy between brothers is quite off-target, and its viewers will be left feeling a lot less than euphoric.