As the number of recognized student groups on campus has spiked, funding has failed to keep pace. Now, the College is upping the student activities fee from $75 to $200.
By Jonah S. Berger and Devin B. Srivastava 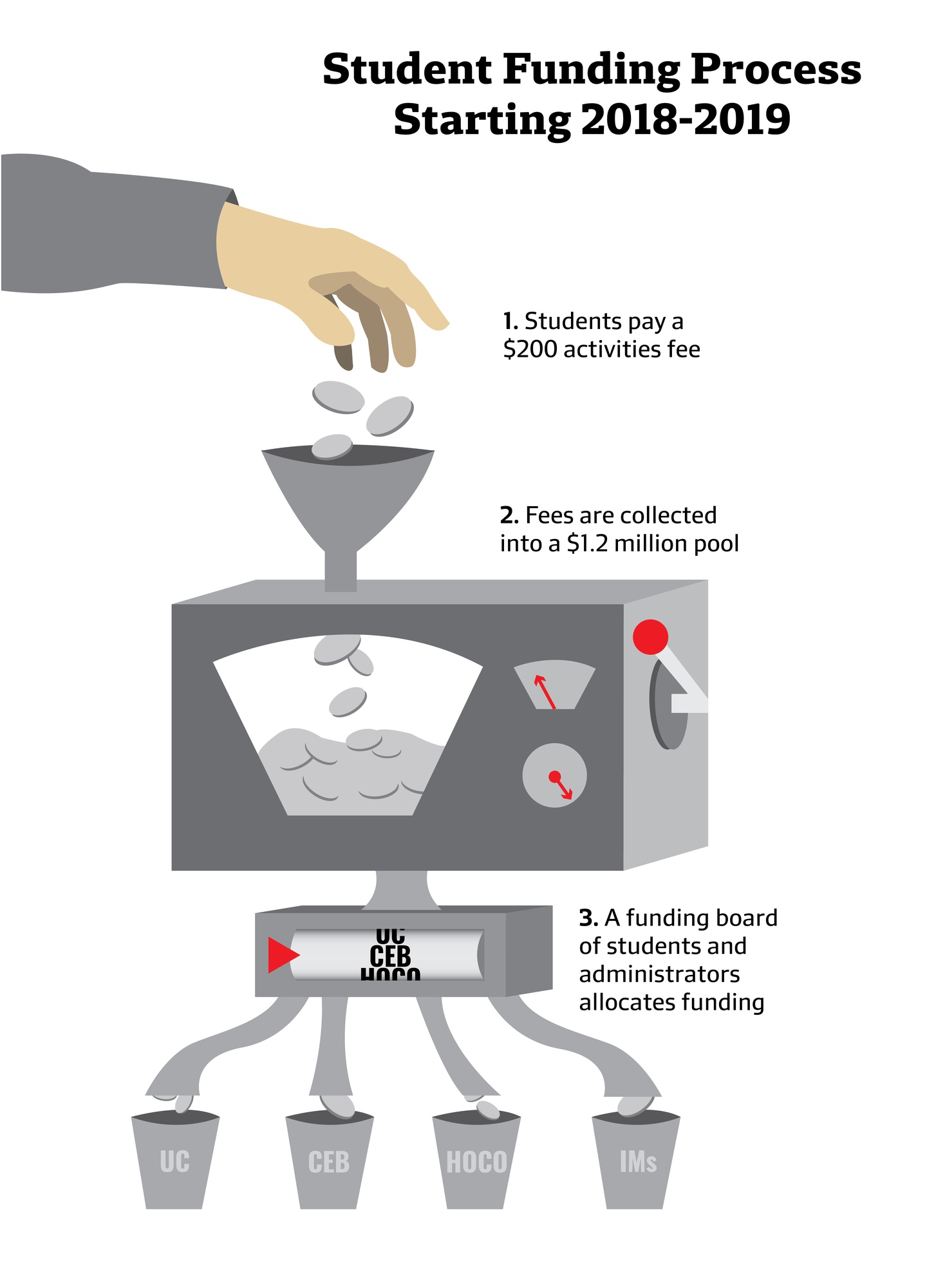 Almost all recognized student groups at Harvard share one common trait: a need for money.

From social gatherings to club retreats to ordinary operating costs, nearly every group must obtain funding to adequately serve its members.

The vast majority of funding for student groups at the College stems from the finance committee of the Undergraduate Council, the College’s student government. The committee, equipped with roughly $300,000 to dole out annually, receives funding requests from student groups throughout the year. The finance committee conducts weekly interviews with group leaders, weighing requests against the UC’s strict funding guidelines.

Yet over the past few years, as the number of recognized student groups on campus has spiked, funding has failed to keep pace. This spring, the finance committee faced a breaking point—ultimately choosing to tap into the UC’s emergency fund to shore up its budget.

In early April, though, the College announced that the student activities fee—the current source of funding for the finance committee—would increase from $75 to $200, changing the calculus for both the committee and for student groups at large.

Student groups at other institutions—including Yale, Princeton, and the University of Pennsylvania—often also draw their funding from fees paid by the student body. But despite similarly high levels of demand for student group funding at the four schools, Harvard’s peers have taken different approaches to ensure funding is available for their campus clubs and organizations.

Soon after the establishment of Harvard’s student governing body in 1982, the newly formed UC opened grant applications to campus student groups. Out of the $58,000 in the Council’s budget at the time, $30,000 was set aside for semesterly grants to campus organizations.

In the following years, as grant requests increased, the Council was forced to make adjustments.

“We get more than 170 grant applications each year, so the average grant that we can give gets smaller and smaller,” former Council President Noah Z. Seton ’00 told The Crimson in 1999.

In 2004, after a concerted push by UC leaders to further increase the activities fee, the faculty—which retained power over term-bill increases when it originally established the Council—voted to increase the optional fee from $35 to $75 over a two-year period. The fee increase nearly doubled the Council’s budget.\ 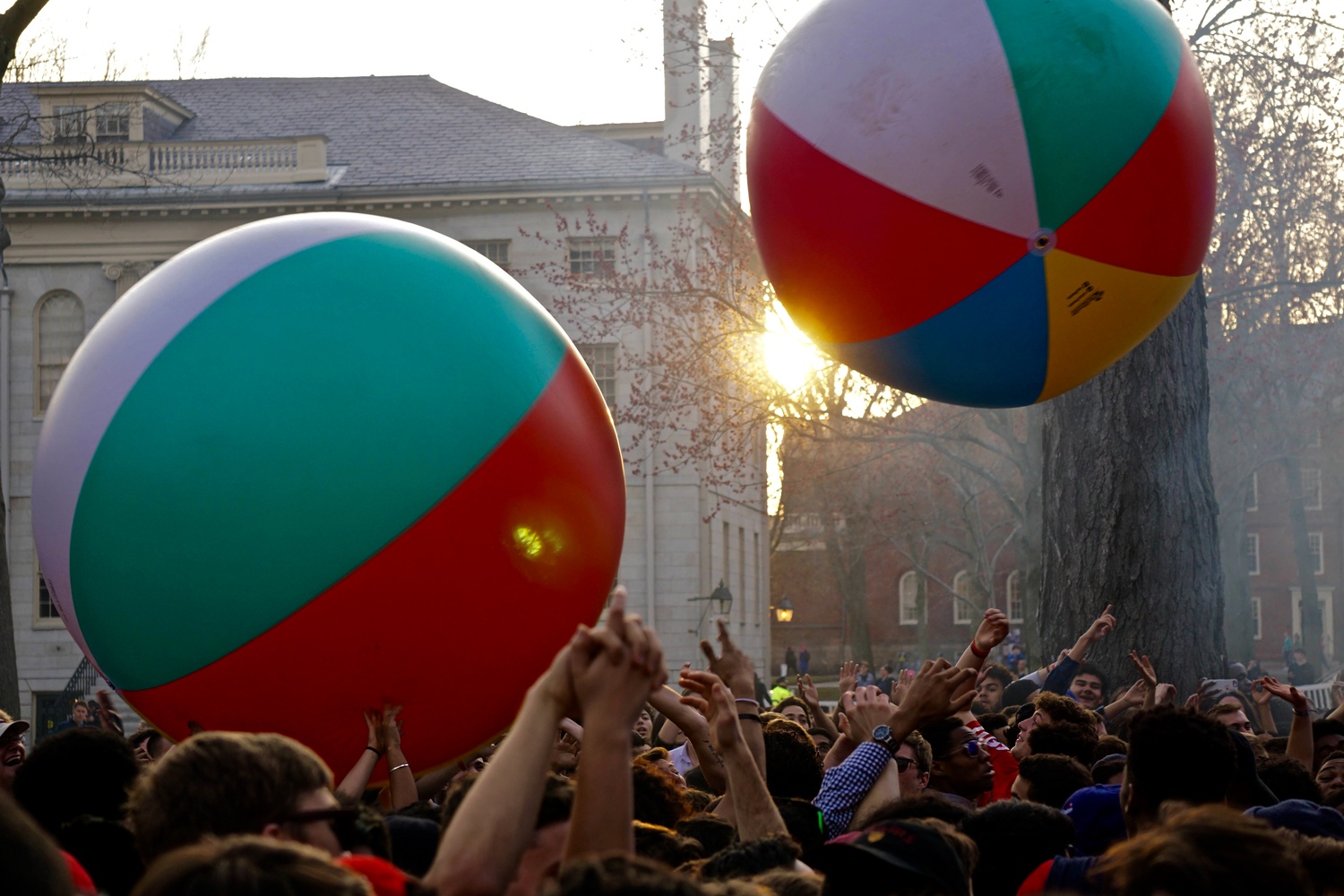 The College Events Board, one of four groups vying for money under the new funding system, hosts Yardfest. By Jacqueline S. Chea

But, even with a larger pool of money, the finance committee continued to face the prospect of cuts to grants. In 2007, for example, the committee grappled with an end-of-the year budget shortfall.

Nonetheless, save for occasional financial obstacles over the years, across-the-board cuts to grants were infrequent, typically reserved for the end of the semester.

Recently, that changed. In fall 2017, the committee imposed an across-the-board cut on all but two weekly grants. In spring 2018, the situation grew more dire when an increase in recognized student groups on campus and higher funding requests totals led to across-the-board cuts consistently above the 25 percent mark. In late March, with the committee preparing to impose a 43 percent cut to its grants pack, the Council used part of its emergency fund to help the committee finance its grant requests.

Finance committee chair Henry S. Atkins ’20 said in an interview in late April that, without any changes in funding this coming year, weekly cuts will likely only continue to grow.

“It’s my expectation that next semester, we’re going to be seeing higher cut rates if no change happens,” Atkins said.

For years, UC leaders have asked administrators to increase the activities fee. In 2012, a report commissioned by the Council called for administrators to raise the fee in order to meet funding requests of student groups.

Dean of Freshmen Thomas A. Dingman ’67 said that, since the beginning of his tenure, one constant has been a demand for money among student groups.

“Students are always asking for more,” he said.

Still, Dingman said students have begun to find other ways to procure funding that do not involve the Council.

“I think one change has been that students are more entrepreneurial,” he said. “So in the absence of grants from the institution, they’ve been very creative about going out to develop their own resources.”

UC leaders viewed the fee increase as a positive change. Council Vice President Nicholas D. Boucher ’19 wrote in an email that the increase will create a “sustainable source” of funding that will “widely benefit” the student body. 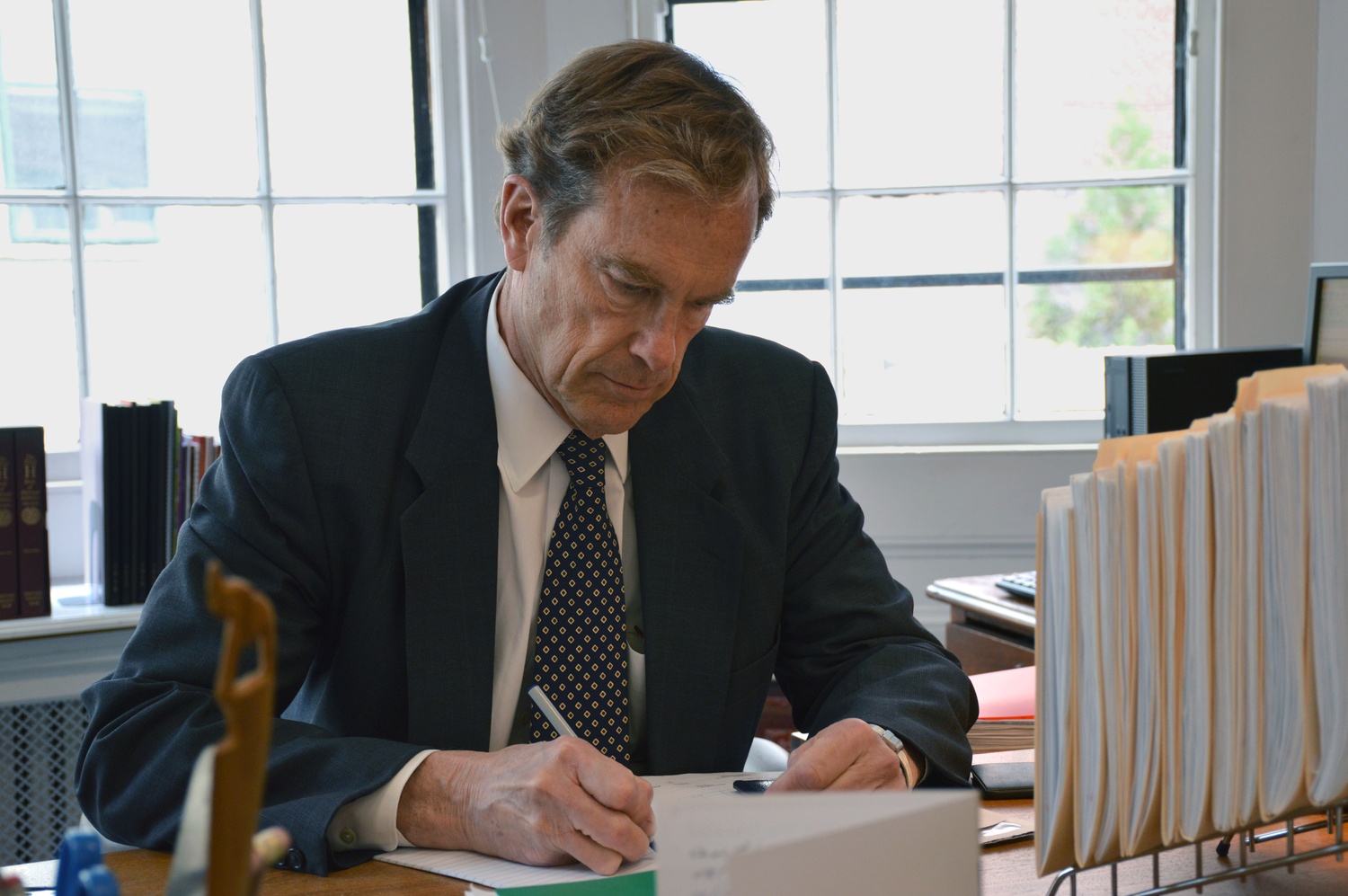 Interim Dean of Student Life Thomas A. Dingman '67 writes at his desk in the Freshman Dean's Office. By Megan M. Ross

“It has the potential to change the amount of funding received by the UC which would affect, among other things, the amount in grants given to student organizations,” Boucher wrote.

The change, though, affects not only the amount of the fee, but also how the money is distributed. While the UC currently receives all money gathered from the activities fee, that will no longer be the case starting fall 2018.

Associate Dean for Student Engagement Alexander R. Miller has said new “funding board”—comprising College administrators, as well as undergraduate representatives from the UC, College Events Board, House Committees, and the Intramural Sports Council—will be charged with allocating the money gathered through the fee.

No longer will the Council automatically receive a set amount of money. Instead, the body will have to show that it—and by extension, the student groups it funds—deserves the money it receives.

“I think the board will also be asking, ‘So with the current funding you’re using, how are you assessing it, how are you engaging with students?’” Miller said.

“I would really encourage the University to allocate more money to the UC if only to make sure that the financial stability of OSL-recognized clubs on campus is secure in the future,” Billiau said.

Miller wrote in an emailed statement that the College will work to provide “proper” funding for student groups. 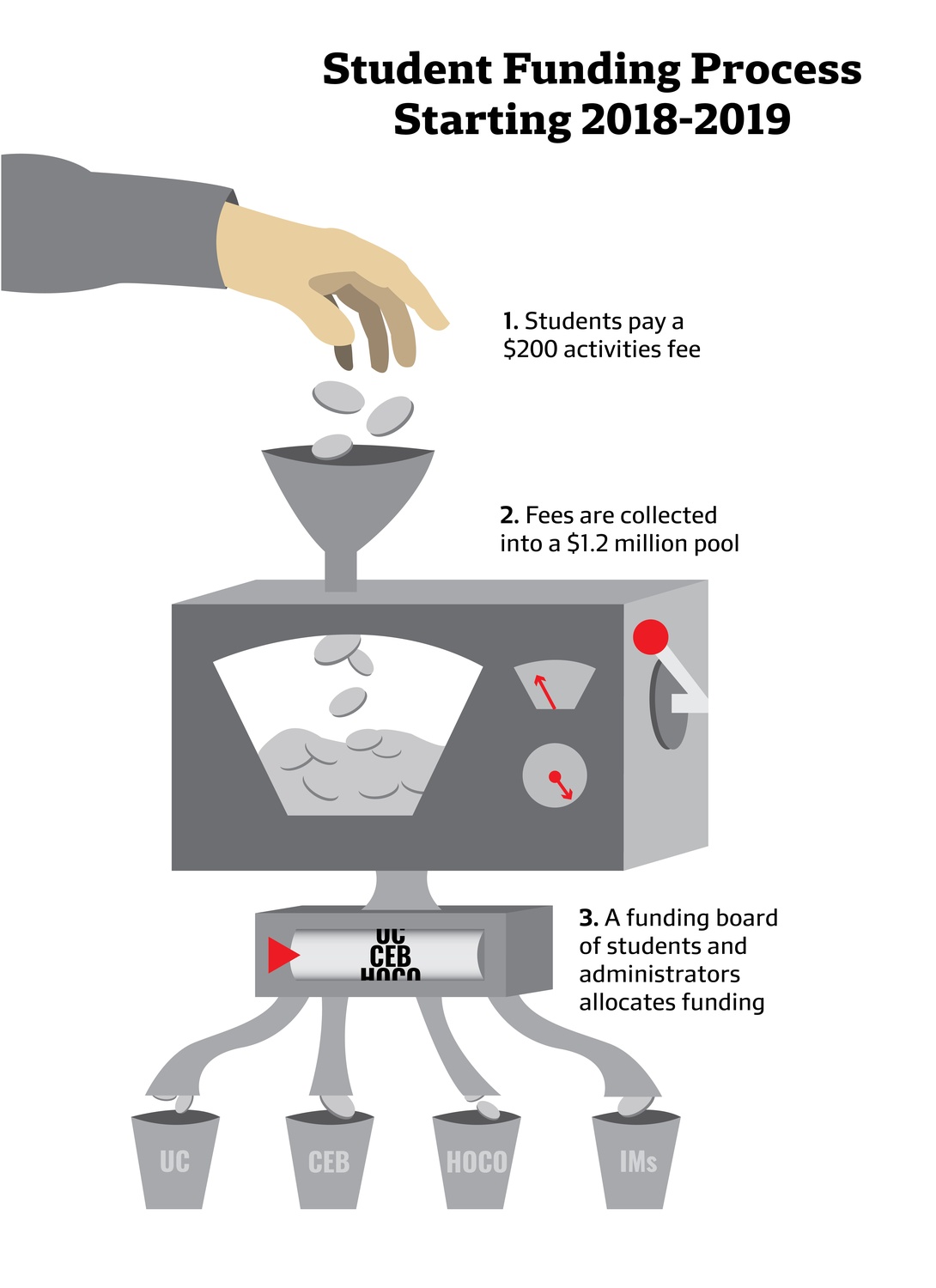 “The College recognizes the importance of a thriving student organization community,” Miller wrote. “We are committed to ensuring that proper funding is provided to allow student groups to offer programming that enriches the student experience at Harvard.”

Miller did not directly respond to a question asking whether the Council will see an increase in funding for student groups this fall.

In recent years, in order to backstop funding for undergraduate social programming on campus, University President Drew G. Faust has tapped into a portion of her presidential discretionary fund to support events like the [BLANK] party. But with a new president coming to Massachusetts Hall later this year, the future allocation of that fund is uncertain.

“President Faust has been generous in supporting social programming within our office and… we do recognize that she will be stepping down from her office effective June 30,” Miller said. “We feel that this increased fee would bring a sustainable funding source to student organizations, to student programming, broadly.”

“And it would get away from the model that we have built in the past where we relied heavily on philanthropy for student programming,” he added.

FUNDING AROUND THE IVY LEAGUE

Funding for student groups at Yale bears some similarities to funding at Harvard. At both schools, the majority of funding derives from proceeds gathered from a student term-bill fee.

At both schools, students can opt out of the fee—$125 at Yale compared to the current $75 at Harvard—though the opt-out rate differs significantly between the two schools. These differences likely stem from the different routes Harvard and Yale students must take to avoid paying the fee.

To opt out, Yale students simply have to check a box on their application. At Harvard, however, students must send a letter to the College requesting a waiver before they can escape the fee. The opt-out rate at the College has recently hovered around 1 percent, according to Harvard spokesperson Rachael Dane. 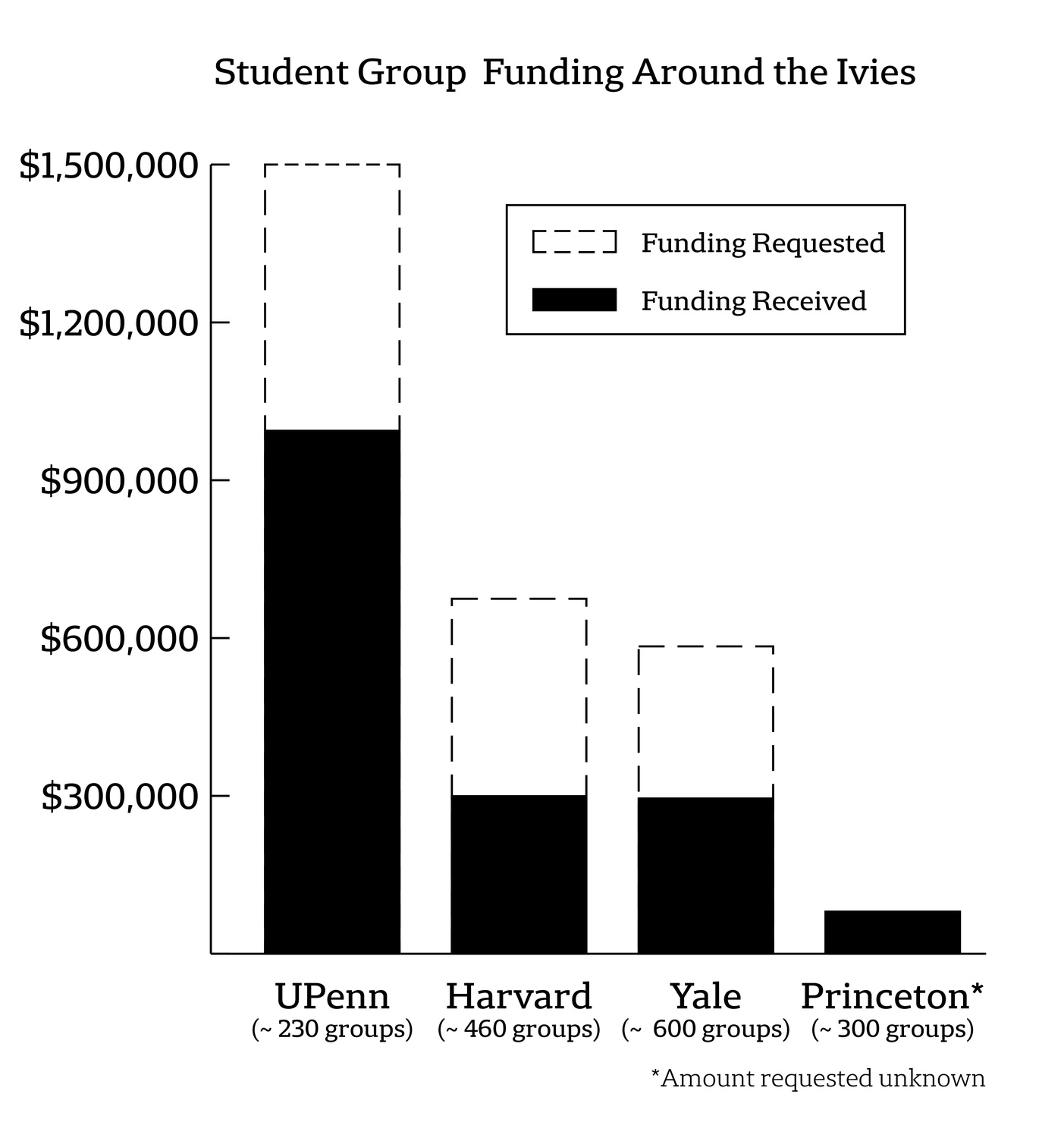 By comparison, Yale’s opt-out rate stood at 7.85 percent in 2014 and has increased since, according to Addison Jakubowicz, the finance director of the Yale College Council.

The higher opt-out rate at Yale can account for tens of thousands in potential lost funding.

“There are many students for which that additional $125 makes a difference and that’s completely understandable,” Jakubowicz said. “We just sometimes find it frustrating that administration expects us to uphold the same level of activities and events on campus with this shrinking number.”

It remains to be seen whether the fee hike at Harvard will lead to an appreciable increase in the number of students opting out. But the last time the fee was increased—in 2006—the opt-out rate did not increase, suggesting increases in the fee do not always correlate with higher opt-out rates.

At both Yale and Harvard, though, requests for money far exceed available funds. As at Harvard, student representatives at Yale have called for a fee increase to address the funding shortage.

“The [Undergraduate Organizations Funding Committee] did recently ask administrators to increase its funding,” said Heidi Dong, incoming vice president of the YCC. “This is an ongoing conversation, so it is still too early to say whether or not we'll be successful.”

Diego Negron-Reichard, a member of the Princeton undergraduate body that oversees student group funding, likewise said he believes an increase to Princeton’s student activities fee—currently the lowest in the Ivy League—is imminent.

“We think that Princeton will see an increase in students fees in the next two years,” Negron-Reichard said. “That's something the USG is lobbying for… mostly because we see the need for greater inclusive events and those are big, bigger ticket items.”

Administrators at Princeton are “very supportive” of a fee increase, according to Negron-Reichard.

While Harvard and Yale’s student governments have often struggled to meet the funding demands of student groups, the University of Pennsylvania is awash in funding for student groups.

Last year, close to $1 million was available to the roughly 230 recognized student groups on Penn’s campus, meaning average per-group funding stood at about $4,300. At Harvard, that figure stands at roughly $650 per group; at Yale, it is just $350.

Penn’s student group funding comes primarily from a $4,752 general fee, approximately half of which accrues to the student government and its funding arm, the Student Activities Council. The fee, unlike at Harvard and Yale, is mandatory.

Student groups at Penn have two primary options to obtain funding: either apply for money through an large annual grant—decided upon in February of the prior academic year—or apply as needed to a smaller fund, distributed on a rolling basis throughout the year.

“In terms of having money that is allocated on an annual allocation basis, it just saves a lot of time in the long run,” he said. “And then having the contingency fund is helpful because groups aren’t always going to know all of their expenses a year in advance.”

What student groups at the University of Pennsylvania do know is they will continue to have access to a consistently funded million-dollar pool of money for clubs and organizations.

But at Harvard—with an optional fee about to see a price hike and changes in how the fund is distributed—the future of student group funding is less certain.

“This year has been the particularly financially strenuous time for the UC Financial Committee, which has been tasked with distributing a fixed amount of funding to a growing number of student organizations,” Boucher wrote.