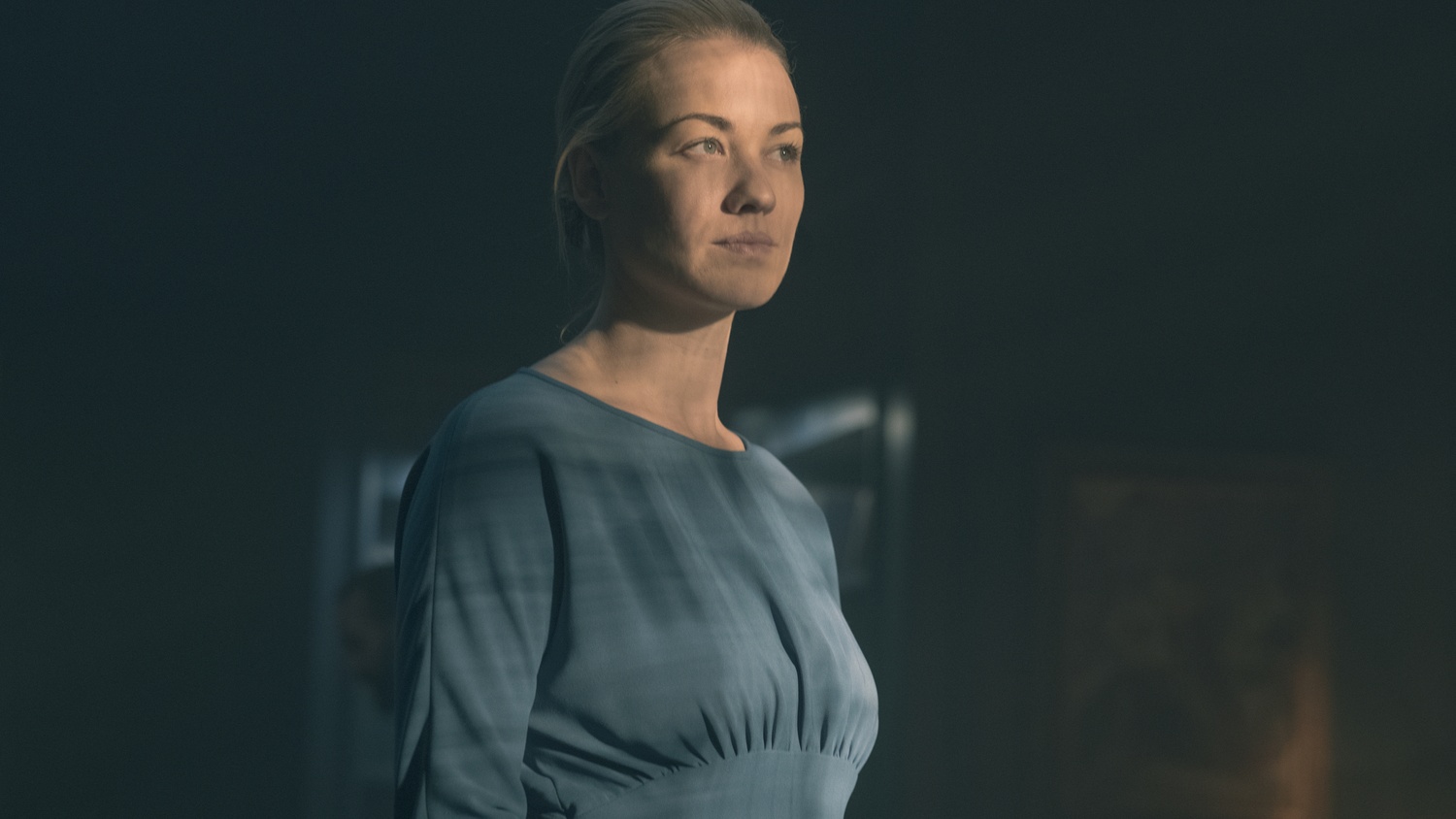 The last shot of “After,” the previous episode of “Handmaid’s Tale,” is a closeup of June (Elisabeth Moss) clicking a pen. The act signals the start of the rule-breaking that drives the eighth episode, “Women’s Work”: In Gilead, it is highly illegal for women to read or write—“[Serena] writes, I read. This is the new normal. And an offense to God,” June muses—setting off a domino effect that sees June use her tenuous friendship with Serena to help Janine (Madeline Brewer), who has recently returned from the Colonies, and Serena’s taste for well-intentioned disobedience grow, then get brutally beaten out of her.

As always, June must balance the thin line between surviving in the Waterford household through obedience and exerting what little freedom she can find in its cracks. For the first time, however, the two become one as June edits the documents Serena (Yvonne Strahovski) forges in her husband’s name. By obeying Serena, June exercises a right of which she has long been deprived, one she very clearly misses. Their nightly routines are the foundation for the growing civility and mutual respect Serena and June come to have for one another, but they also represent June’s inadvertent help to Gilead, the very government working to suppress her and all women living under its jurisdiction. It’s a dichotomy that puts June in a gray area, but also one she’s already grown familiar with: she grappled with her feelings for Nick and her love for her husband to when she attempted to escape Gilead, leaving her daughter behind. But for Emily, surviving the Colonies has made everything black and white; she would be quick to condemn June if she were ever to discover June’s betrayal, as June is made well aware after overhearing a conversation between Emily and Janine. “Anyone helping Gilead deserves to be blown apart,” Emily asserts.

“If Emily knew that I helped cover for the Commander (Joseph Fiennes) with Serena, would she want me dead, too? I can’t say I blame her. Stay in Gilead long enough and it starts to eat you from the inside out. That's one of the things they do. They force you to kill, within yourself,” June thinks. What Emily doesn’t realize, though, is that June’s deception is ultimately what gives her the leverage to come to another handmaid’s aid, Janine. Rumor has it that a child has fallen ill, a potentially devastating misfortune considering how few children survive to birth in the first place. The kicker? The child is Janine’s daughter, Charlotte—or as her former Commander and his wife have decided, baby Angela.

The symbolism is both subtle and striking: While the Commander is soon to return from the hospital, still recovering from the bombing, Angela is rushed there, having fallen ill to an unknown disease in the Putnam’s care; where the Commander is one of the most powerful men in Gilead, Angela, not only a baby but also a girl, is the most helpless; where the Commander’s absence empowers June and Serena as women, Angela’s empowers them as mothers, a role that is at the heart of what Gilead distorts. Indeed, by putting Serena in a tug-of-war situation where she must choose between obeying her husband and following her gut, the writers astutely focus this episode on motherhood, what women would do for their children, and what they would want others to do for their children. “I think, if it were my baby, I would do whatever I could. Law or no law,” June tells Serena, who knows there is one illegal option left unexplored that could potentially save Angela. It’s a test for Serena, one of her first as the soon-to-be mother of June’s baby: How far will she go to protect a child? If she won’t do everything in her power, how will she be a good mother?

For once, Serena rises to the occasion. And that’s how, after a handmaid is given a pen, a Martha (Karen Glave) is given a stethoscope. The episode’s fast pace drives one role reversal after another: June can make requests of her superiors, Serena and Aunt Lydia, on her friend’s behalf, Serena can give a Martha back part of the identity that Gilead has stripped away, and said Martha can reclaim her title as the best neonatologist in the country. But as in earlier episodes, the denouement and the events leading up to it are too easy. June’s emotional manipulation of Serena is inconsistent with the latter character’s calculating nature. The Putnams welcome Janine back into Angela’s life with barely any resistance.

Despite the character-related inconsistencies, the episode upholds its themes well. just as Charlotte heals and starts to thrive again, so does the Commander. His recovery turns the Waterford home back into the prison that it is—only this time, it’s Serena’s turn to face the consequences of disobedience. Her beating illustrates what discipline, when taken to the extreme, can look like, and is a turning point for Serena, whose character had shown signs of improving. And this is where the writers’ genius seeps into the show: The Commander’s punishment acts as the final role reversal of the episode. Humiliating and dehumanizing, Serena’s whipping forces her into a position not unlike the handmaid’s, one in which she can only helplessly submit to her Commander’s brutal assault. Her punishment is perhaps the final nail in the coffin of the dwindling relationship between she and her husband, and marks the end of her short companionship with June, who has learned by now how to deal with swift change to protect herself from the very people she might have called friends just hours before. But as she falls to her hands and knees in front of the Commander’s office, it’s obvious that adapting to such changes hasn’t gotten any easier.