From Harvard to Beacon Hill: Quentin Palfrey ’96 Makes a Bid for Lieutenant Governor 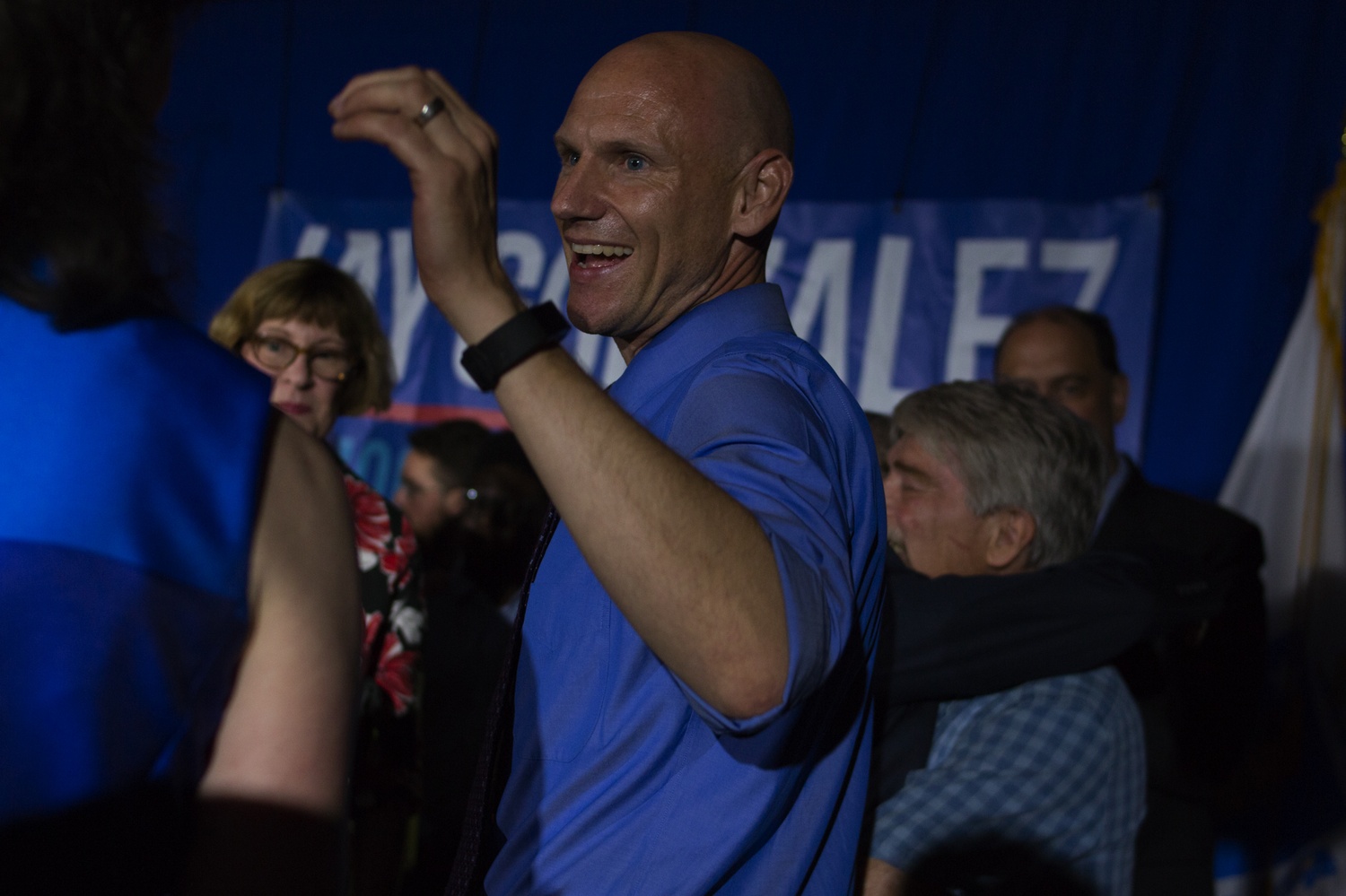 Quentin A. Palfrey ’96, pictured here on the night of the Sept. 2018 primary, is the Democratic nominee for lieutenant governor. By Caleb D. Schwartz
By Benjamin E. Frimodig, Iris M. Lewis, and Meena Venkataramanan, Crimson Staff Writers

Quentin A. Palfrey ’96, the Democratic nominee for lieutenant governor, always knew he wanted to serve others.

Now, he’s running to be Massachusetts’s next lieutenant governor.

“Dating back to my time at Harvard, I’ve been very focused on issues around poverty and inequality, which are some of the major themes of my campaign,” Palfrey said in an interview. “I think I’ve always been interested in public service, and my family has been involved in politics for a long time.”

Indeed, Palfrey is the great-great grandson of U.S. President Theodore Roosevelt, Class of 1880.

He has more recent Harvard role models, too. Palfrey's parents, Sean G. Palfrey ’67 and Judith "Judy" S. Palfrey ’67, are pediatricians and professors who currently serve as the faculty deans of Adams House.

“They’ve been really wonderful surrogates and supporters during this entire process,” Palfrey said of his mother and father. “Going back to my childhood, I think a lot of my interest in fighting poverty and inequality has come from watching them serve some of the poorest patient populations in Boston and in Cambridge.”

Sean and Judy Palfrey said they see their family values reflected in their son’s campaign.

“The basis of his views are what we have lived and what he has grown up with,” Sean Palfrey said. “Quentin has been really looking forward to running for office ever since he was probably five or six.”

While earning his law degree, Palfrey said he worked with the Harvard Legal Aid Bureau to represent low-income clients in state court, particularly on issues of domestic violence, housing, and unemployment.

“I’ve been very focused since my time at Harvard and Harvard Law School on vulnerable populations and social justice,” he said.

Palfrey also said he was a member of the Harvard Law School Democrats. While at Harvard, he was taught by such notable names as U.S. Senator Elizabeth Warren and Supreme Court Justice Elena Kagan.

“Professor Warren was my contracts professor during my first year of law school,” Palfrey said. “I learned from her about some of the tools we can use in the legal system and political system for fighting against inequality and standing up for consumers. I also studied under [Professor] Kagan and worked with her when she was solicitor general, which was a real honor.”

After graduating from Harvard Law, Palfrey worked in nonprofit management and in the Obama administration, most recently serving as the North America executive director of J-PAL, a poverty research lab at MIT.

In recent months, though, Palfrey has zeroed in on the challenges of the campaign trail. He and his parents have worked hard to convey his progressive platform and political experience to as many Massachusetts voters as possible.

According to Sean and Judy Palfrey — who have been helping their son campaign — Quentin Palfrey regularly visited three or four different places throughout the state each day to talk to voters in advance of the Sept. 4 primary.

“We were literally surrogates,” Sean Palfrey said, adding that he enjoyed explaining to strangers “who [Quentin] is, what his background is, what he’s interested in, why he’s a good man. And then Quentin comes in and, boom, he’s the person. He’s very dynamic.”

“Jay Gonzalez has a really bold vision for where he wants to take Massachusetts, from really investing in transportation and education, to really leaning in, to leading on some of the big challenges we face, like the opioid crisis, climate change, and housing affordability,” Palfrey said.

Though recent polls have cemented Baker as the nation's most popular governor in recent memory, Palfrey said he remains hopeful for a Democratic surge this fall — spurred, he speculated, by discontent with President Donald Trump’s administration and policies.

In Palfrey’s eyes, his social justice-driven campaign offers Massachusetts voters an opportunity to combat the Republican-controlled federal government that he said Baker represents.

“Under Donald Trump, our values are under attack,” Palfrey said. “It's time for the states to lead on the issues that affect ordinary people and vulnerable populations.”

“The most important thing for Democrats in Massachusetts to do is to continually fight this idea that the race is automatically lost to Governor Baker,” Freeland said. “It is possible for Democrats to win this fall.”

Palfrey said he looks forward to a progressive blue wave, a phenomenon he described as a “new energy on the left” embodied by victories like Ayanna Pressley’s recent primary upset in Massachusetts’s 7th Congressional District.

“The turnout in the primary election in Massachusetts for Ayanna Pressley… was considerably higher than the polls and the pundits had predicted,” Palfrey said. “I think that what we’re seeing all across the country is a blue wave building of young people, of progressives and communities of color getting engaged at unprecedented levels.”

This November, Palfrey said, he hopes voters will bring their energy to the polls and that the Democratic party will continue to invest in local and state races, a move he said amounts to “taking a page from the conservatives’ playbook.”

“We need to go through the process of really investing in new voices and new candidates and more diverse candidates,” Palfrey said. “We need to build a grassroots movement across the country that will take decades but will also totally transform the political landscape.”