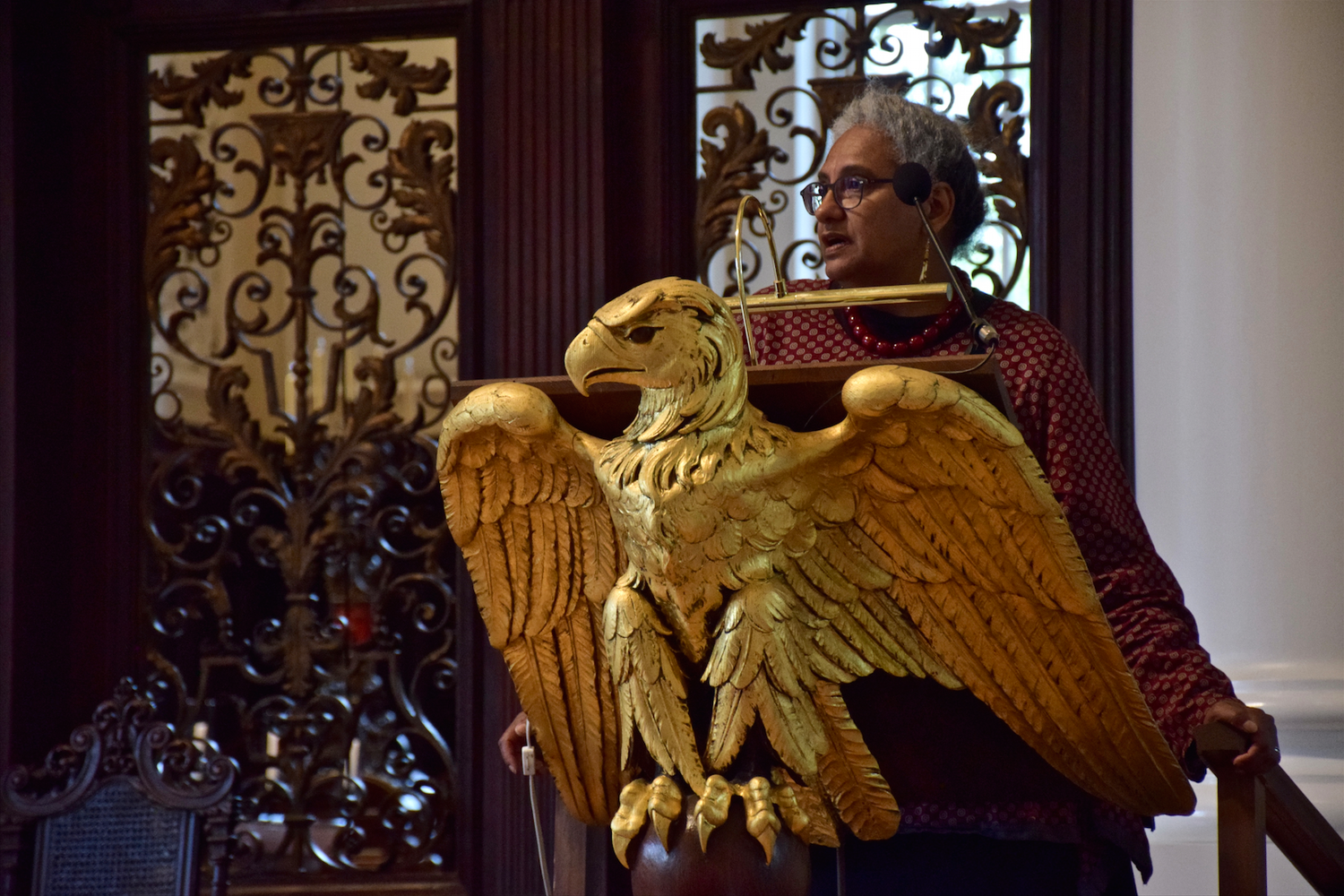 Elizabeth Solomon, a member of the Massachusetts Tribe at Ponkapoag and the Assistant Director of Academic Affairs and Fellowship Programs at HSPH, speaks at the College's inaugural Latinx Convocation. By Ellis J. Yeo
By Andrea M. Bossi, Crimson Staff Writer

Upperclassmen, alumni, and faculty travelled to and from the podium of Memorial Church Sunday afternoon for the College's first Latinx Convocation themed “Mis Raices, Mi Communidad.”

The ceremony, the title of which translates to “My Roots, My Community,” was organized by Latinx student leaders in order to welcome students of Latinx heritage in the Class of 2022.

Genesis N. De Los Santos ’19, one of the student speakers, spoke of her upbringing in Dorchester, Mass. and her experiences and growth at Harvard.

“Whatever paths you trekked to get here, whatever mountains our ancestors climbed, whatever borders they crossed — both the physical and theoretical — we have achieved the unfathomable,” De Los Santos said.

She continued to address the incoming class, focusing on the feeling of “otherness” that she said the students may encounter during their four years at Harvard. She reassured the class, “If you’re feeling inadequate, know that you are not alone. We have all at least once felt this.”

Mariachi Veritas opened the ceremony and played several songs before the speakers addressed the audience. The ceremony was followed by an evening reception with light refreshments in Teresita Fernández’s art installation in Tercentenary Theatre, called “Autumn (... Nothing Personal).” First-year students were congratulated with roses as they mingled among peers and speakers.

Angel A. Mata ’22, who is of Venezuelan heritage, was one of the several dozen first-year students at the event.

“Coming to Harvard is very different. I didn’t really realize how much I’d miss that part of my life,” Mata said, referring to his upbringing in Florida in a predominantly Latinx environment.

“To me, this [convocation] means representation on campus and acknowledgement that we are here, and we are powerful,” Xochitl Morales ’22 said. “I’m excited for the freshmen next year.”

Elizabeth Solomon, assistant director of academic affairs and fellowship programs at the Harvard School of Public Health and a member of the Massachusetts Tribe at Ponkapoag, was one of many faculty members and administrators to speak at the convocation. She acknowledged the history of the land where Harvard stands and its ties to the indigenous people of the region.

“When indigenous communities in the United States gather together, they traditionally acknowledge the ancestral holders of the land they are meeting on,” Solomon said.

“Many non-Native communities have started to incorporate this practice in public events both to honor Native peoples who belong to the land and to recognize that the use of the land by Harvard has come as a result of displacement of the land’s original holders.”

In addition, a few faculty members addressed Latinx Convocation guests. Among them were María Parra-Velasco, a senior preceptor in the Department of Romance Literature and Languages; Brian D. Farrell, Leverett House Faculty Dean and a professor of Organismic and Evolutionary Biology; and Alejandro De La Fuente, a professor of Latin American history and economics.

Dianisbeth M. Acquie ’16, a second-year Law School student and Lowell House resident tutor, said she was involved with the Latinx community during her time as undergraduate, including as vice president of Fuerza Latina. In her speech, she told first-year students that it was “remarkably brave” to leave their homes and chase that “beautiful dream” at Harvard.

“There is a shirt I’ve seen before, and it reads, ‘I am my ancestor’s wildest dreams.’ And it’s true. I am. You are.”

A previous version of this article misspelled the name of Alejandro De La Fuente. It has been updated.