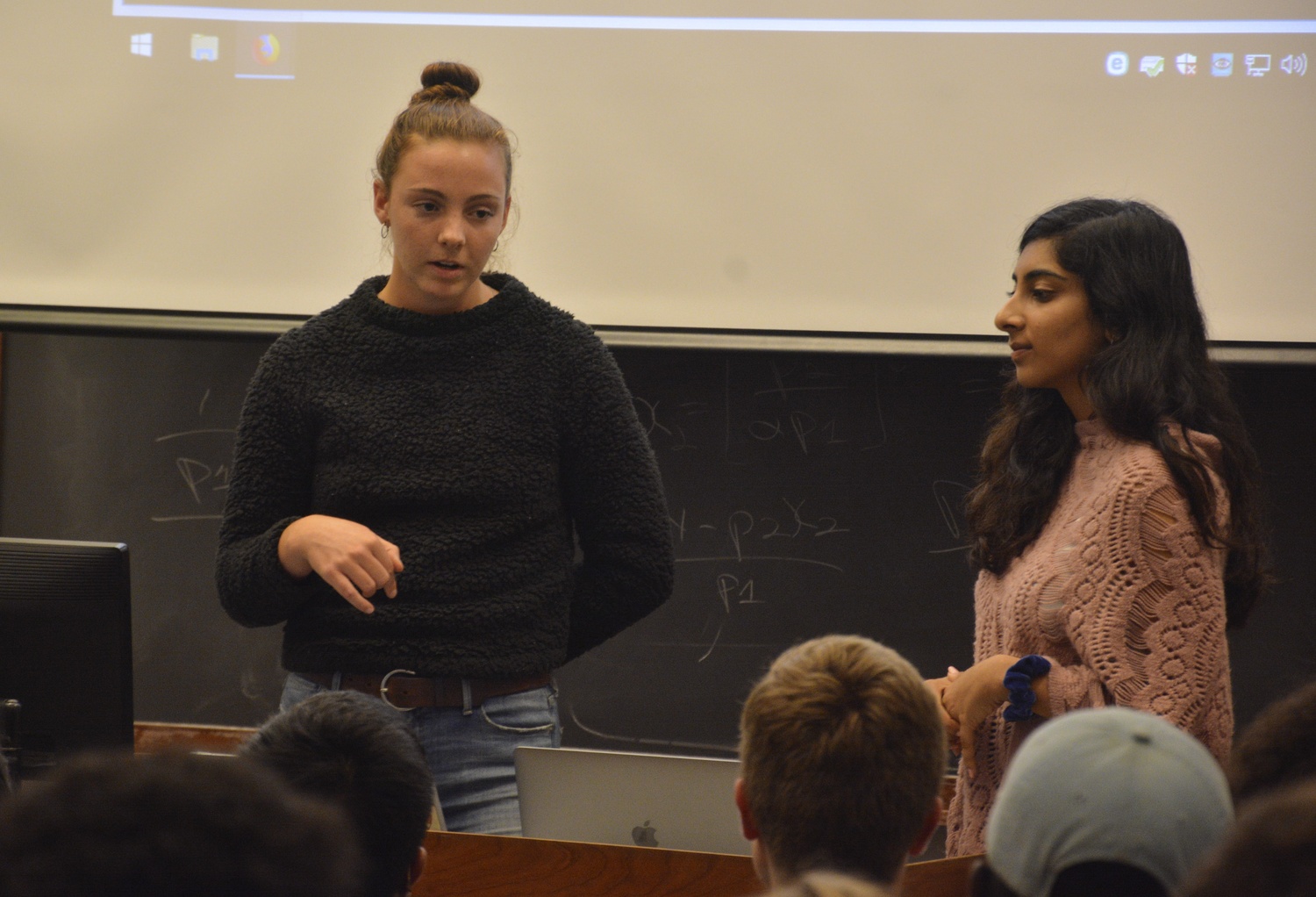 Eleanor C. "Nell" Shea '20 and Priya P. Kukreja '21 from the Harvard College Reproductive Action and Dialogue speak about the implication of Judge Brett Kavanaugh's possible confirmation during a meeting with the Harvard College Democrats and Our Harvard Can Do Better Tuesday night. By Kathryn S. Kuhar
By Delano R. Franklin, Crimson Staff Writer

There was only one thing on the minds of the roughly 40 people who attended the Harvard College Democrats' general meeting Tuesday evening.

Kavanaugh, President Donald Trump’s pick to fill the seat left vacant by Justice Anthony Kennedy, seemed a lock for confirmation to the Court until Christine Blasey Ford and Deborah Ramirez went public in the past few weeks with allegations of sexual misconduct that date back decades. Many at the meeting Tuesday heavily criticized Harvard Law School’s silence regarding the two women’s stories.

Though the Law School’s top brass released a statement praising Kavanaugh shortly after his nomination, no administrators — including Law School Dean John F. Manning ’82 — have commented on the conservative judge since Ford's allegations surfaced two weeks ago. Connie Cho, a Law School student and Cabot House tutor who helped organize a campus walkout Monday to support Ford and Ramirez, said she and her peers are disappointed by what she called the Law School’s failure to address the allegations.

“So many of us, as Law Students, saw this news and expected a response from our school,” Cho said. “There was no response.”

Kavanaugh serves as a lecturer at the Law School and is slated to teach a course there in Jan. 2019. Some students have called on Harvard to bar the nominee from teaching in Cambridge pending a “full and fair investigation” into the allegations of sexual misbehavior — Law School administrators have repeatedly refused to say whether or not they will continue to employ Kavanaugh.

“It is Law School policy not to comment on personnel matters," Law School spokesperson Robb London wrote in a statement Tuesday.

Cho began her presentation to the College Democrats by comparing the allegations against Kavanaugh to similar allegations faced by current Supreme Court Justice Clarence M. Thomas during his confirmation process in 1991.

The two men’s situations evoke parallels. During Thomas’s confirmation, Anita F. Hill, a professor of social policy, law, and women’s studies at Brandeis University, spoke out to accuse the nominee —  her former supervisor at the Department of Education — of sexually harassing her.

Cho said the United States Senate’s response to Hill’s allegations is similar to the way Congress is responding today to Ford’s and Ramirez’s allegations against Kavanaugh.

In an interview with the Washington Post, Ford, a psychologist and professor of statistics at Palo Alto University, said Kavanaugh pinned her to a bed, groped her, and tried to pull off her clothing at a party both attended in high school. In a later interview with the New Yorker, Ramirez said Kavanaugh had thrust his penis in her face at a party both attended while students at Yale.

Kavanaugh has repeatedly rejected the charges, calling them “false accusations.”

Cho said the reoccurrence of high-profile cases like these in the federal judiciary represents “not a bug in the system, but a feature.”

In addition to Cho, the College Democrats also invited undergraduates from the ReproJustice Action and Dialogue Collective and anti-sexual assault advocacy group Our Harvard Can Do Better.

Members of ReproJustice Action and Dialogue Collective spoke of links between Kavanaugh’s political leanings and sexual violence and argued that his appointment to the Court will threaten federal protections for abortion and healthcare.

Amelia Y. Goldberg '19, a member of Our Harvard Can Do Better, said the investigation into the allegations has been “bungled." She said the lack of Senate response invites comparisons to the Brock Turner case, in which a then-Stanford student served three months in prison after being charged with sexually assaulting a classmate.

The College Democrats closed their meeting with a phone banking effort. They encouraged attendees to call their senators to demand they reject Kavanaugh’s nomination.

Ford and Kavanaugh are slated to testify regarding her allegations in front of the Senate Thursday morning. The Senate Judiciary Committee is scheduled to take a final vote on the nominee Friday.