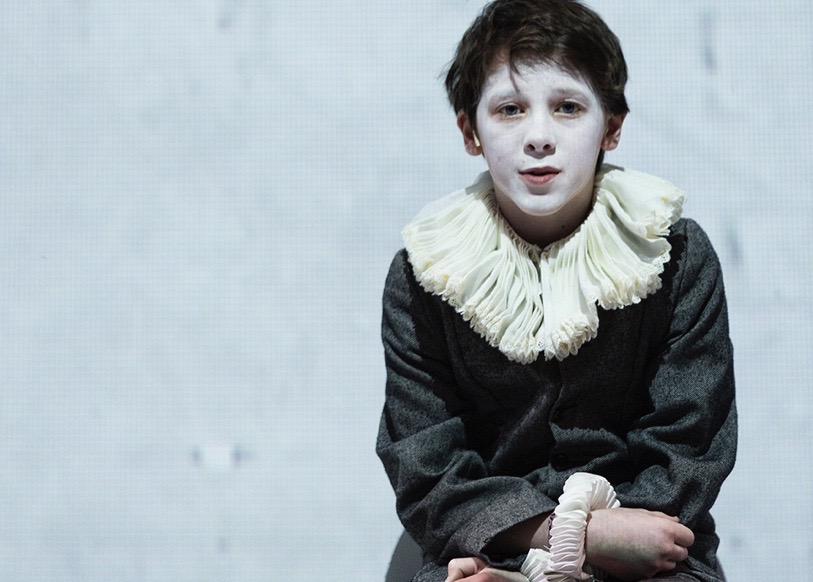 Ollie West as the titutal character in “Hamnet.” By Courtesy of Gianmarco Bresadola

In “Hamnet,” written and directed by Bush Moukarzel and Ben Kidd, William Shakespeare’s only son, 11-year-old Hamnet (Ollie West), never understood his father’s work. He died before he ever got the chance to. What he does understand is this: William is an absentee father, preoccupied with his own greatness. Stripped of complex language and any inkling of plot, “Hamnet” reduces the Shakespearean canon to a moving meditation on parent-child relationships. The result is a wonderfully accessible performance that is nonetheless quite nuanced.

Moukarzel and Kidd of the Dead Centre theater company of Ireland debuted “Hamnet” in Schaubühne, Berlin, in 2017, and it has since been performed in Holland, Dublin, London, Brisbane — and, most recently, Boston. From Sept. 20 to Oct. 7, ArtsEmerson is hosting the play at the Paramount Center’s Robert J. Orchard Stage. The hour-long performance is a one-man, one-child act, featuring intimate monologues by Hamnet, who doubts his own worth. “You have to be a great man to meet a great man,” he says. The boy is dressed as a contemporary 11-year-old, with black Converse, a blue hoodie, and an iPhone. He is the epitome of pre-teen candor and angst: an honest portrait of a hurt yet devoted son.

Later in the performance, his long-lost father returns. William Shakespeare (Moukarzel) does not appear in-person. Behind the stage is a screen on which Moukarzel is projected: pacing, grieving, and talking — finally — to his dead son. This unique multimedia set allows West and Moukarzel to enact an uncanny reunion of conversation and ghostly absence. The barrier of time is impenetrable, as Moukarzel is confined to the screen.

ArtsEmerson’s Director of Artistic Programs David Dower values the attention paid to both perspectives, noting that stories of parents and children are often universal, bridging all demographics and experiences. However, the production does not weigh the father’s and his son’s perspectives equally. West is simply too affable a kid for the focus to be anywhere but on him. He opens the play, chats up the audience, and allows himself to be vulnerable —  all before his dad finally shows up. Moukarzel, by contrast, uses a hard, fatherly tone — and, of course, is isolated within the screen. This distances the audience from his character, which makes it more difficult to connect with him. At its essence, the play is formed through the child’s eyes.

This is one of “Hamnet”’s  greatest charms and greatest complicators. Though minimalistic, the quippy performance brims with philosophy, pedagogy, and ample room for interpretation as West reminds us what it’s like to be 11.