The Return of Bryce Aiken 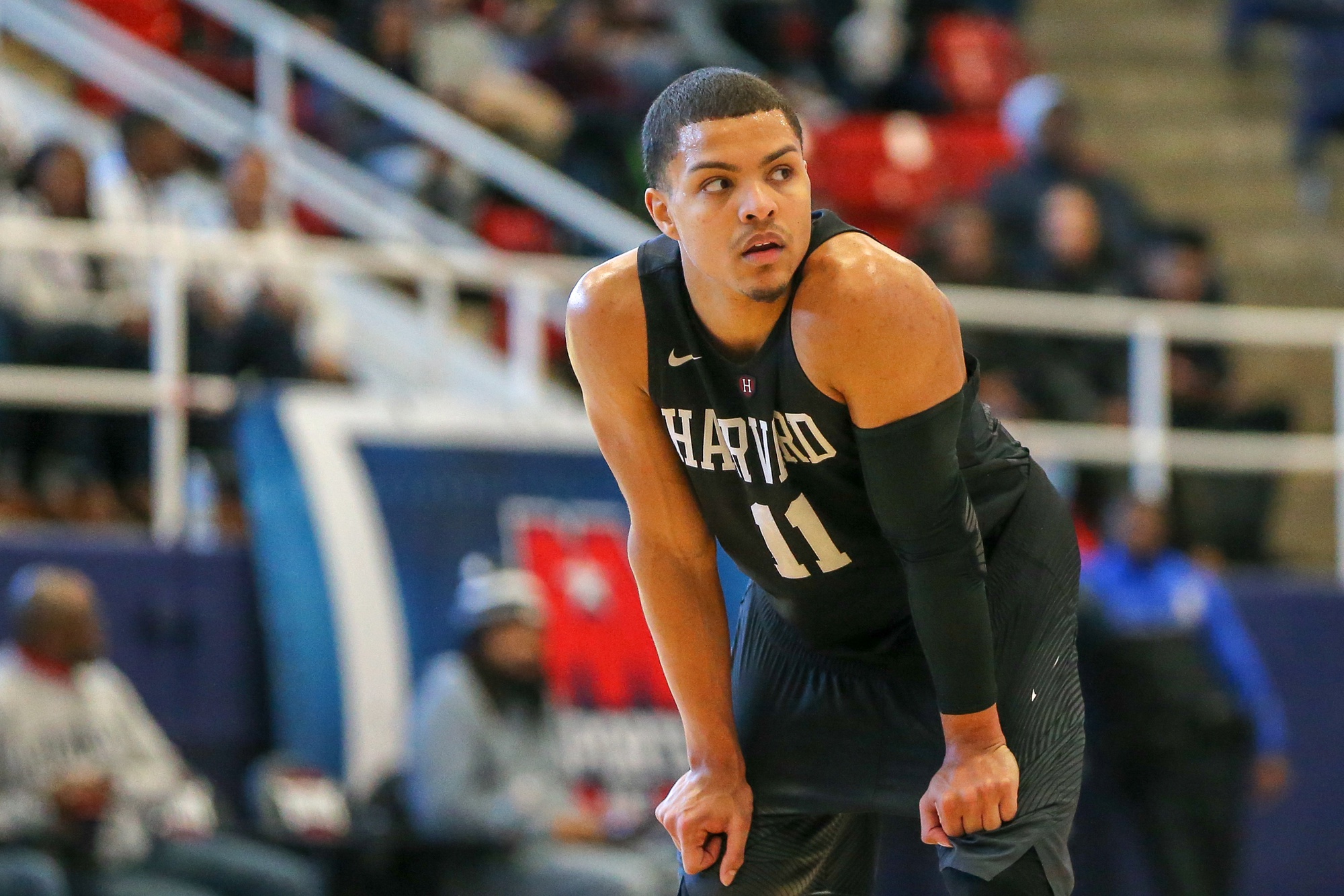 WASHINGTON D.C., — Ever since the dawn of the 2018-2019 campaign, there has been an underlying aura of impatience at Harvard men’s basketball games, home and away.

“When is Bryce coming back? What about Seth?”

These were not just rumblings in the stands. When asked about the timetables of arguably this program’s two most talented players in presser after presser, coach Tommy Amaker’s answers remained the same from preseason through early January.

As non-committal as these answers were, one merely had to arrive a tad early to Crimson games (or stay postgame in some occasions) to sense that the return — especially for Aiken — was fast approaching. In warmup gear, Aiken moved swiftly through drills. Elevated for layups. Knocked down shot after shot.

To put it briefly, Bryce was finally ready.

Fast forward to the present — Martin Luther King Day, 2019. In the frigid, breathless D.C. air, a usually bustling metropolis was at a standstill both by the holiday and month-long government shutdown.

Inside the Burr Gymnasium on the campus of Howard University, though, was a scene atypical of the dullness and inactivity of the city.

For starters, Howard alum and current U.S. junior senator Kamala Harris had that morning announced her bid for the 2020 presidency. In paying tribute to the very location where she first ran for office as a freshman class representative, Harris fittingly chose the Harvard-Howard game at Burr for her first large public appearance as 2020 candidate.

Beyond the buzz on the sidelines, there was something equally as palpable on the hardwood, at least for the strong Crimson contingency at the game.

After dressing but not playing in Harvard’s Ivy opener loss on Jan. 12 to Dartmouth, Bryce Aiken would make his junior season debut. It was 348 days ago to the date since he went down in agony in Morningside Heights as the Crimson suffered a rare loss to the Columbia Lions, clutching a left knee that would require offseason surgery. 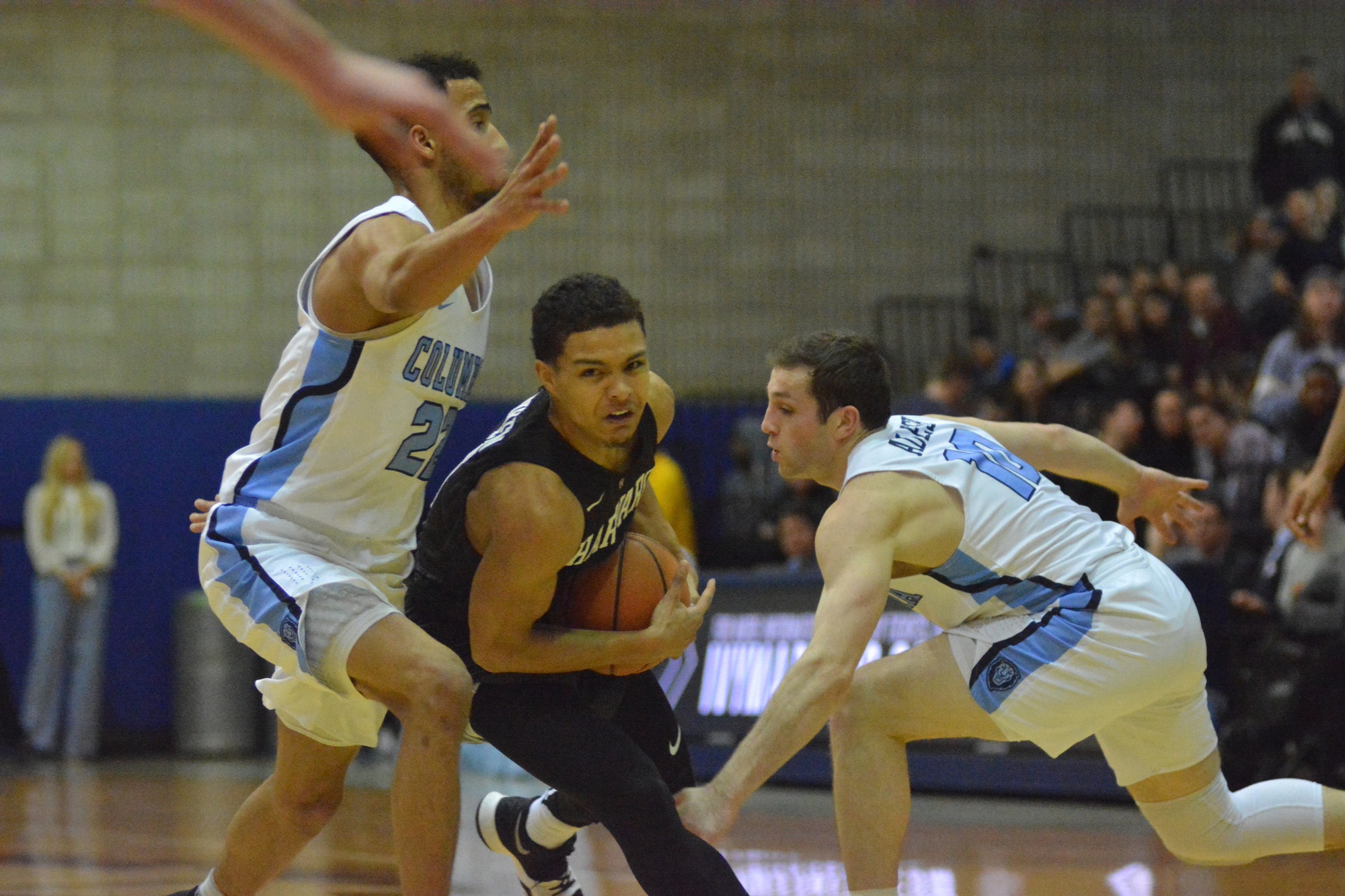 The last time Aiken took the floor was against Columbia in Feb. 2018, when the point guard could not play through a knee injury that had bothered him for much of the calendar year. By Henry Zhu

For someone whose bread-and-butter had been the craftiness to maneuver around defenders, Aiken was left with no choice but to go through the humbling, monotonous, and slow path to recovery.

In mid-May, for example, Bryce uploaded a video on Instagram jogging on the anti-gravity treadmill at Harvard, his first time since his surgery two months prior. In the caption, he commented, “It’s the little things that make the journey so beautiful…I’m feeling super super blessed!”

Alongside keeping up his work with the athletic training staff, Harvard strength coaches played an instrumental role in pushing his confidence forward. Bryan Doo, a former strength coach with the Boston Celtics, was an important mentor to Aiken during his recovery.

“I think our role with Bryce is giving him confidence on ‘Hey this can happen, but that’s okay.’” Doo said last season. “Give him the preparation when you do this [rehab], the work, this is what you are going to feel, don’t be afraid of that. That’s nothing new.”

When asked about the journey back, Aiken let out a sigh of relief before giving a brief reflection.

“That’s a long answer,” Aiken said. “But the short answer, just got to stay tough and be patient. Keep working for each and every day, take it one step at a time and just persevere through it all. Stay positive.”

These mantras carried him through his recovery, and now it was time to pay off the dividends. 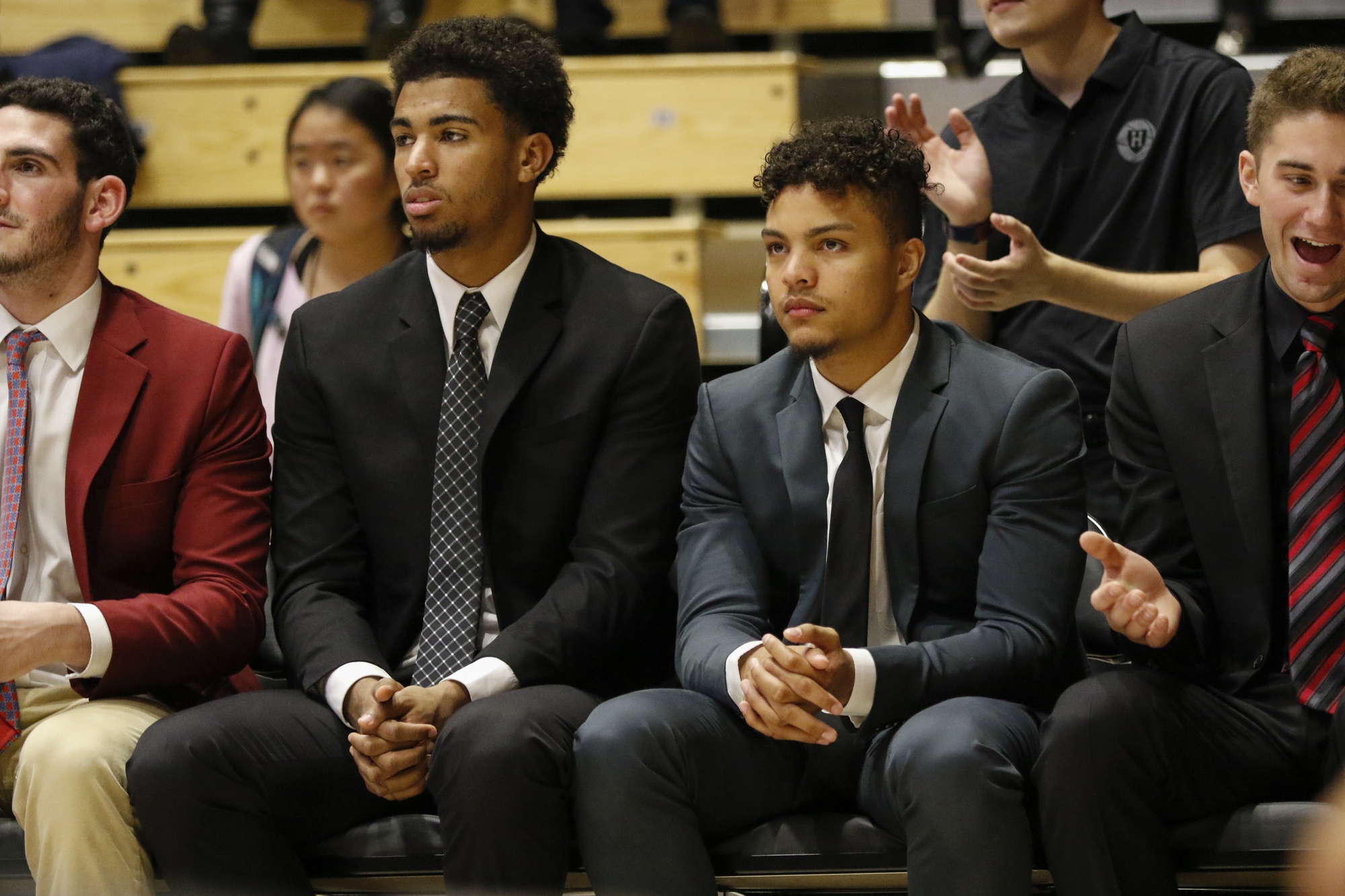 With Aiken and Towns sidelined through non-conference play, the Crimson finished with a 6-7 record prior to Aiken's return. By Timothy R. O'Meara

Coach Amaker had no hesitancies about making a statement of confidence in Bryce. In the past, the Harvard coach sent symbolic messages to the team through who he started — one may recall his decision last year against BU to remove all of his usual starters from the opening lineup.

After Harvard and Howard locked arms in pregame as the Gospel Choir of Harlem honored Martin Luther King Jr, it was Aiken who took off his warmups first. Yes, there would be no adjustment period. Bryce was back, and he was in.

It only took 16 seconds for the point guard — whom Coach Amaker last season pronounced the team’s best player — to declare his return.

Off a high perimeter feed from classmate big Rob Baker, Aiken received the ball at the upper-left arc and calmly swished the triple. As the bench rose in elation, Bryce looked down, pounded his chest twice, and backpedaled confidently back the other way.

Things settled down from there, but Aiken would stay hungry on the perimeter. In the opening minutes, Bryce never ventured far beyond the arc as the Crimson moved the ball from one side to another at will.

Aiken quickly tallied his first dish of the afternoon, locating combo guard partner Christian Juzang in the left corner for the trey in Harvard’s third possession. This Aiken-Juzang pairing was a rarity before Bryce’s injury last season, but noticeably brought about improved court spacing and dynamic movement on the offensive end.

“I actually used to play two guards in high school and coming back to it was a good experience,” Aiken said. “It gives me an opportunity to get off the ball a little bit and [defensively] switch which we will definitely get better at.”

On the other end, Aiken was matched up with lanky junior guard Charles “CJ” Williams. This was not the easiest of opening-game matchups, as the 6-foot-5 Bison had a much longer wingspan than the 6-foot-0 Crimson guard.

Williams quickly drew a fast-break foul on Aiken at the 17:30 mark and Howard coach Kevin Nickelberry would continue to try to exploit the mismatch, drawing isolation plays for taller Bison guards in the left baseline against Aiken throughout the contest.

Back on offense, Bryce continued to make an impact even without scoring. Now, positioned on the left corner, Aiken ran consecutive plays in which he wrapped around to the front of the arc or cut back to the corner. The first set landed in a Baker three to extend an early 9-2 lead, while another resulted in an open-but-missed baseline triple for Aiken.

Amaker kept his guard in for the first six minutes, and right before hitting the bench Aiken completed an efficient transition lay-up, accelerating ahead of the pack before curling it in on the other side. By then, the Crimson had jumped out to a 15-7 lead. 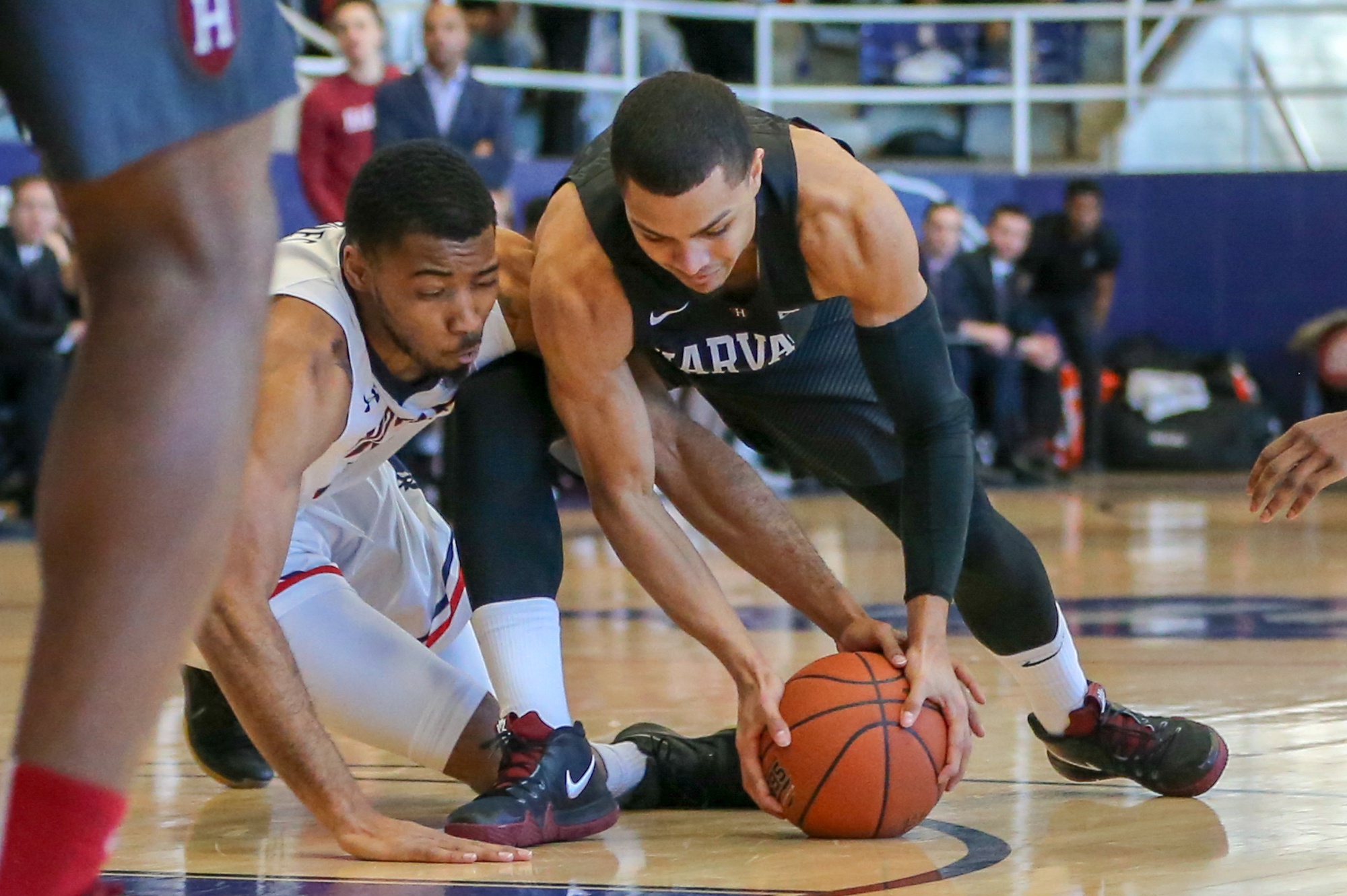 Against Howard, Aiken showed a combination of interior aggressiveness and three-point shooting. By Courtesy of Rodney Pierce/Harvard Athletics

The freshman year Aiken, with the flair to break ankles on every possession or make Derrick Rose-like drives to the paint wasn’t completely there. But as classmate Justin Bassey commented, there was a noticeable increase in offensive creativity and pace to the team with #11 on the court.

“What he brings in terms of not just on-the-court stats and the ability to score, but also just energy, enthusiasm, and the way he carries himself,” Bassey said. “That does a lot more beyond pointing what’s up for us. Having Bryce back is a huge game changer for us.”

Amaker gave Aiken three more minutes on the half, balancing time with his now abundance of guards including Juzang, sophomore Rio Haskett, as well as freshmen Spencer Freedman and Noah Kirkwood. On the sidelines, Aiken stood in the corner rather than take a seat on the bench, engaged and ready to go back in at moment’s notice.

In that short span of time before the end of the first frame, Amaker edged his point guard to be more aggressive. On the sidelines, Coach pleaded with Aiken to “shoot the ball!” particularly with the Bisons operating a 3-2 zone that left open opportunities in the corners.

Aiken responded with increased fervor and intensity. On a fast-break drive at the nine-minute mark, Bryce pushed the ball downhill and drew the foul inside over two Bison defenders. Rather than operating from the corner, Aiken came back to the top and began to generate playmaking opportunities of his own. Twice, he located Bassey for triples after cutting inside— the second which brought the Crimson lead to 26-19 at 7:23.

At halftime, Bryce had a respectable six points, three assists, and two fouls as his team led 45-31. After the statement three to start the contest, Aiken was unable to connect on three more opportunities from deep.

Whatever was said in that locker room, even with the large margin, seemed to catalyze the team to initiate the half. CJ Williams of the Bisons attacked the basket but was smothered by Chris Lewis. Immediately, Aiken called for the ball and located a streaking Baker. And bang! Baker vaulted into the air to finish the alley-oop.

That budding chemistry of the first half between Aiken and Baker — the latter who finished with a double-double, will certainly be something to watch. Baker finished another dunk followed by one from Lewis. This looked like the opposite of the first frame, as the Crimson sought opportunities inside rather than outside.

Aiken was now also guarded defensively by 6-foot-1 sophomore guard RJ Cole, a fellow New Jerseyan. With a smaller defender, Aiken began to capitalize on a newfound offense aggressiveness. Despite some setbacks including two turnovers while driving inside, Aiken fearlessly attacked the basket while showing greater consistency on the outside.

Still, Bryce did not back down from three. His most memorable of the night came with just six minutes left in the game. The Bisons had gnawed at the Crimson’s double-digit lead for most of the game, but it still stood around 9-12 points.

In what could be only described as a dagger, Aiken nailed a step-back three at the end of the shot clock with Cole in his face. If this was not a bit of old Bryce, then there is little other evidence. One of the commentators said in steadfast fashion, “That’s dangerous.” The other commentator, let out a “Wooo…haha.”

Oh, and it is also worth mentioning that Bryce played all 20 minutes of the second half. Yep, this did not look like a player in need of a minutes restriction.

Final stat line for Bryce on the night: 16 points, 29 minutes. 4-of-10 from the field, 3-for-7 from three. 2 turnovers, 3 personal fouls. Coupled with a team-high 5 assists, about as well of a debut as the team could expect.

Postgame, when asked about Bryce’s performance, Amaker made sure to temper his enthusiasm.

“He can play better,” Amaker said. “I’ve seen him play a lot better. But for his first time back, it’s really neat to see him back on the court.”

It has felt like an eternity for the team to even hear the words “back on the court” associated with Bryce Aiken. With partner-in-crime Seth Towns’ return looming in the near future (again no official word from the team), the spark that is brought with these two players is undeniable to a team that Amaker noted “should be a little better than what we are right now.”

That said, the Ivy season has already started. With a healthy Bryce, this begins an exciting new chapter in the season for the Crimson, one in which his services have been sorely missed.