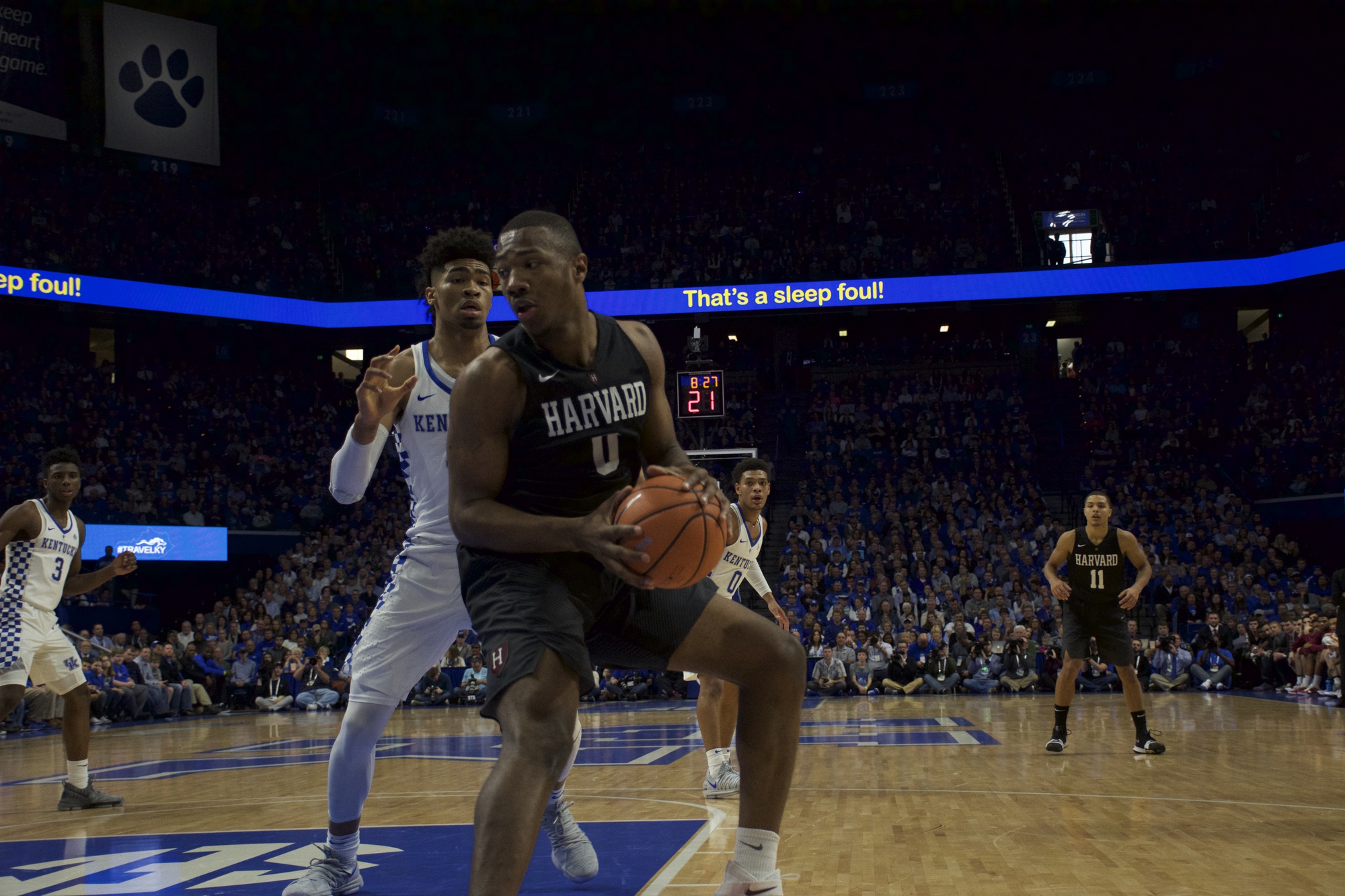 Sophomore wing Justin Bassey drove down the right side of the lane, taking a couple of dribbles before trying to bank home a layup. The shot clanged off the front of the rim, but before Boston University’s defender could collect the rebound, captain Chris Egi flew in for a putback slam.

This sequence of events led BU coach Joe Jones to storm onto the floor, confronting the official over a questionable no-call for offensive goaltending. The Terriers were quickly assessed a technical, and Bassey hit the two ensuing free throws.

So went the contest between Harvard men’s basketball and Boston University on Thursday night at Lavietes Pavilion—a well-executed offense and a commanding presence in the paint for the Crimson (5-6), and frustration for the Terriers (4-7). Harvard prevailed, 74-63, to collect its second straight victory.

“Nineteen turnovers and 13-for-20 from the foul line, not very good numbers there, but a team win and an energizing kind of win for our program with all of our kids having direct contributions,” Crimson coach Tommy Amaker said.

Three Harvard scorers finished in double figures on a night on which 13 players checked in, and 11 of them tallied points. Junior forward Weisner Perez and sophomore forward Seth Towns posted 12 apiece, and Bassey added 11.

The Crimson outrebounded BU, 32-26, but the disparity in the paint was larger than the rebounding totals would show. Harvard forced its way into the paint to collect defensive and offensive rebounds, despite several height advantages for the Terriers. The Crimson outscored BU in the paint by eight points, and when it did not score inside, it was able to draw contact and get to the charity stripe.

Egi’s performance was illustrative of Harvard’s paint prowess. The senior, who made his season debut in this game, tallied eight points and four rebounds in just 18 minutes of action. Two of his four baskets were dunks, and he missed just one shot.

“His leadership on the court and the energy he brought, whether it’s him scoring or someone else scoring, he’s uplifting, and I feed off that, everyone else feeds off that, and kudos to him,” Perez said. “It was crucial tonight.”

In the opening minutes of the first half, Amaker went with some of his typical reserves as his starting five. The 11-year veteran coach penciled in Andre Chatfield, Robbie Feinberg, Zach Yoshor, Perez, and Egi at tipoff.

“I was not pleased and happy with how we were practicing, but we made a statement that the guys who deserved it at that point in time were going to start, and that was the group that did,” Amaker said. “They started the second half, and each time they started they gave us the shot in the arm, the lift we needed.”

Perez was the driving force behind the Crimson’s early lead, as he connected on his first five attempts. In his second career start, the junior finished the game with 12 points and seven rebounds.

Egi and Perez, who had just 11 minutes of playing time entering the contest, were key factors in Harvard’s win. The duo missed just three of their combined 12 shots, and the rest of the Crimson followed the veterans’ lead. Harvard shot 55.3 percent from the field—45.0 percent from three-point range—and this shooting efficiency paid dividends.

Three-point shooting has been a thorn in the Crimson’s side in the early stages of this season. However, the hosts took advantage of the Terriers’ zone defense and shot 9-for-20 on three-point attempts.

“I know our staff, our assistants in particular, really put in extra work with our guys to get shots up, and it’s nice to see that that work is paying off,” Amaker said. “As I’ve said all along, we should be a better shooting team than we displayed previously.”

Aside from converting layups and hitting threes with regularity, Harvard managed to score in nearly every way possible against BU. On one second-half possession, a Terrier defender cut freshman guard Rio Haskett’s drive short. He faked a scoop shot with his left hand, spun, and hit a midrange jumper while twisting around in midair.

The Crimson’s ball movement and patience were major factors in its high shooting percentage. Harvard was content with swinging the ball around the perimeter and waiting for openings to arise in BU’s zone defense rather than forcing low-percentage shots. However, several times the Crimson waited a tick too long and incurred shot clock violations.

On one second half possession, for example, Harvard passed up several mediocre shot opportunities. Towns ended up with the ball and space in the paint, and he connected on a one-legged jumper from just inside the free throw line.

The Crimson’s ball control was not perfect, however. The hosts lost the turnover battle after exhibiting poise in the opening minutes. Harvard turned the ball over 11 times in the first half, which led to half of the Terriers’ first period points coming off turnovers. In total, the Crimson gave the ball up 19 times to BU’s 16.

The Terriers’ half-court press flummoxed Harvard ball handlers on multiple occasions. Near the end of the opening period, junior guard Corey Johnson found himself trapped on the sideline, which forced an errant pass over a leaping Christian Juzang.

“When I watched, it was one of the things that I was concerned about because we hadn’t seen so much zone,” Jones said. “I thought we got good looks. I thought we got forced into some quick ones more in their man than anything else where we went for a post up and we took a quick shot. We didn’t show any poise at all.”

This two-three zone kept the top scoring Terrier, Cedric Hankerson, quiet throughout the night. The senior had averaged 13.6 points per game in prior appearances, but he shot just two-for-nine, and he was forced to take multiple unappealing looks from beyond the arc.

BU made up for Hankerson’s misses with efficiency from other scorers. Tyler Scanlon, Will Goff, and Max Mahoney combined to shoot 9-of-11 in the first half for 22 points.

An aggressive Harvard defense allowed the Terriers to stay in contention in the first half. The Crimson committed seven fouls compared to just three for Boston University, and the visitors capitalized by hitting six free throws to the Harvard’s zero.

In the second half, the foul and free throw numbers evened out. Neither team impressed at the line, as BU hit 15 of 24 attempts and Harvard went 13-for-20.