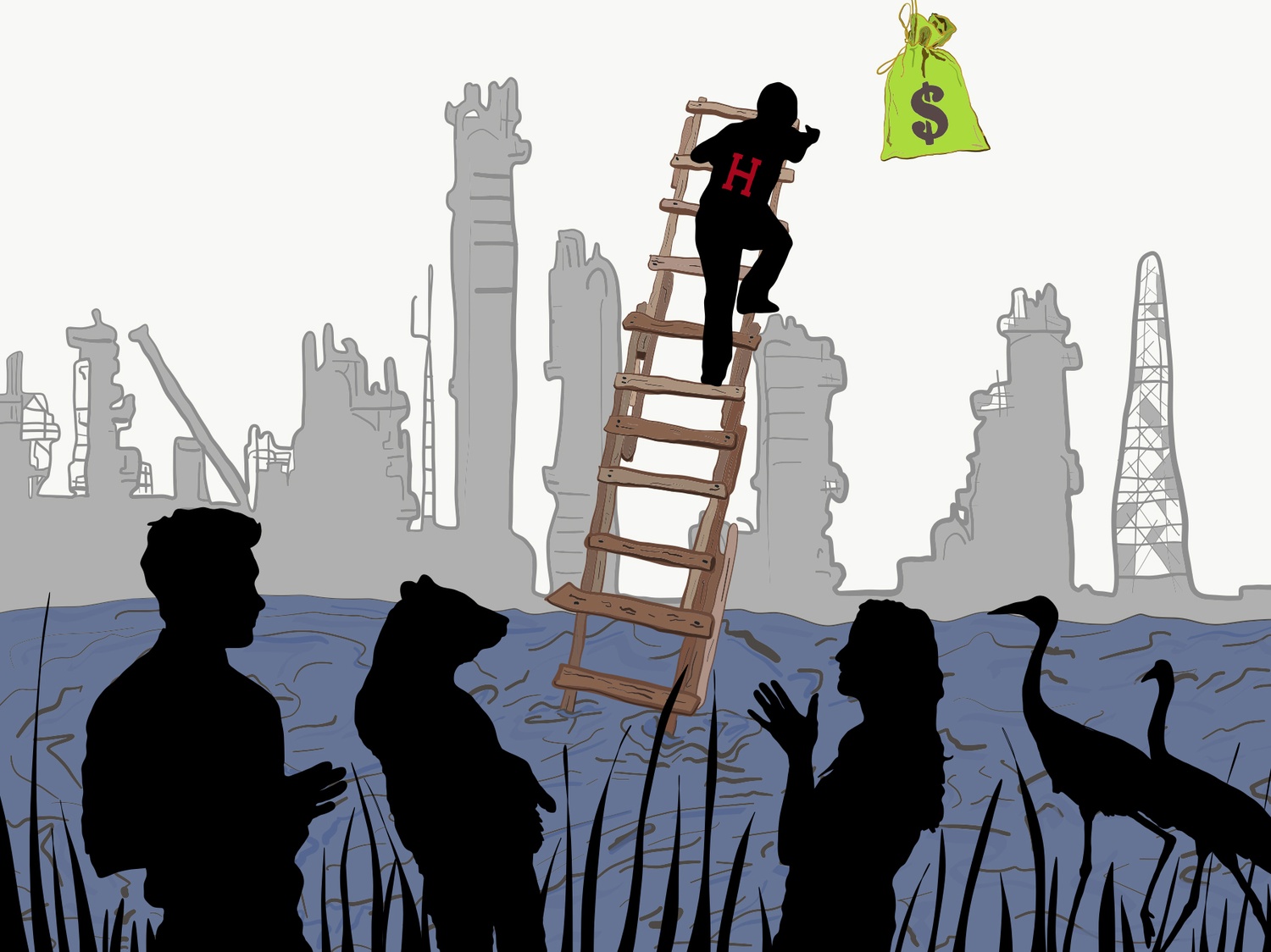 By Maria H. Park
By Marcel E. Moran
Marcel E. Moran ’11, a former Crimson Editorial executive, is a Ph.D. student in City and Regional Planning at the University of California, Berkeley.

When it comes to fossil fuels, University President Lawrence S. Bacow has demonstrated his intention to pursue two opposing goals. He believes that Harvard can remain a leader in research on climate change, renewable energy, and environmental science while also profiting (handsomely) off oil rigs, coal mines, and fracking. Bacow’s responses to calls for Harvard to divest its nearly $40 billion endowment from fossil fuels and join the growing list of schools worldwide that have taken this bold step reveal his disappointing position.

For Bacow, Harvard’s research agenda and investment principles need not cohere and can even be contradictory. When asked about the possibility of divestment from private prisons, Bacow stated that the University should not use the endowment to “achieve political ends or particular policy ends.” He added that “there are other ways that the University tries to influence public policy through our scholarship, through our research, but we don't think that the endowment is an appropriate way to do that.” This perspective (largely shared by Bacow’s predecessor, former University President Drew G. Faust) ignores the incongruity between the arm of the University studying sea-level rise and the other arm accelerating it with reckless investments.

Guided by this mindset, perhaps it is only a matter of time before Bacow reverses Harvard’s 1990 divestment from the tobacco industry, given the Harvard School of Public Health’s research on smoking presumably serves as an adequate counter balance. Indeed, there’s still time to buy more shares in private-prison corporations, which for Bacow can be offset by Harvard’s significant scholarship on that industry’s egregious conduct. Across these cases, Harvard’s research does not absolve the University of related investments. So, why should we believe it redresses the University’s financial attachment to fossil fuels?

More recently, Bacow has gone further in his defense of Harvard’s fossil fuel investments, under an even more curious rationale. Indeed, this past December, he said, “It's also the case that if we want to bring about meaningful change — as I think we should — in trying to help create clean paths to energy, that we need to be willing to work with those organizations and institutions that are responsible for the infrastructure that literally fuels our economy.” This defense – effectively, if we can’t beat them, join them – is even worse than simply wanting a good return on the endowment, regardless of its holdings. Instead, President Bacow looks at the decades of deceit from the fossil fuel industry, such as its long-term propaganda campaign to muddy the waters on climate science and opposition to the Intergovernmental Panel on Climate Change, and sees a reasonable partner.

The key organization that must change for comprehensive fossil fuel divestment is the Harvard Management Company, the University-owned subsidiary charged with growing the endowment via investments. While HMC has taken some positive steps toward divestment – including a “pause” in some natural-resource investments in 2017 – it has no explicit, enforceable ban on fossil fuel investments in place. President Bacow has remarked that divestment itself is logistically challenging. (For instance, can it still invest in car companies, which sell products that run on gasoline?) But HMC can still significantly clean its holdings now and in the future by selling its shares in any company that extracts, refines, or sells fossil fuels, as well as removing its money from commingled funds that include fossil fuel company equities and corporate bonds. An even simpler target to start with would be a ban on investments in any “carbon major” company, or one of the 100 companies that generated a whopping 71 percent of all the carbon emissions since 1988. The logistics of this challenge are a poor excuse to avoid dealing with it.

As students, faculty, and even a former member of the Board of Overseers have stated, Harvard has the opportunity to send a strong message to higher education institutions around the world that we cannot meaningfully fight climate change while investing in the industry causing it. Sadly, this is not the first time the University has lagged behind in an important divestment movement. Indeed, Harvard’s slow and inadequate divestment from South Africa during apartheid still casts a long shadow, and Bacow so far is leading the University toward an analogously shameful outcome. Still in its infancy, Bacow’s presidency has the chance to champion a sustainable future, but only if he addresses the challenge of climate change in a single, clear voice, rather than an equivocating doublespeak.

Marcel E. Moran ’11, a former Crimson Editorial executive, is a Ph.D. student in City and Regional Planning at the University of California, Berkeley.