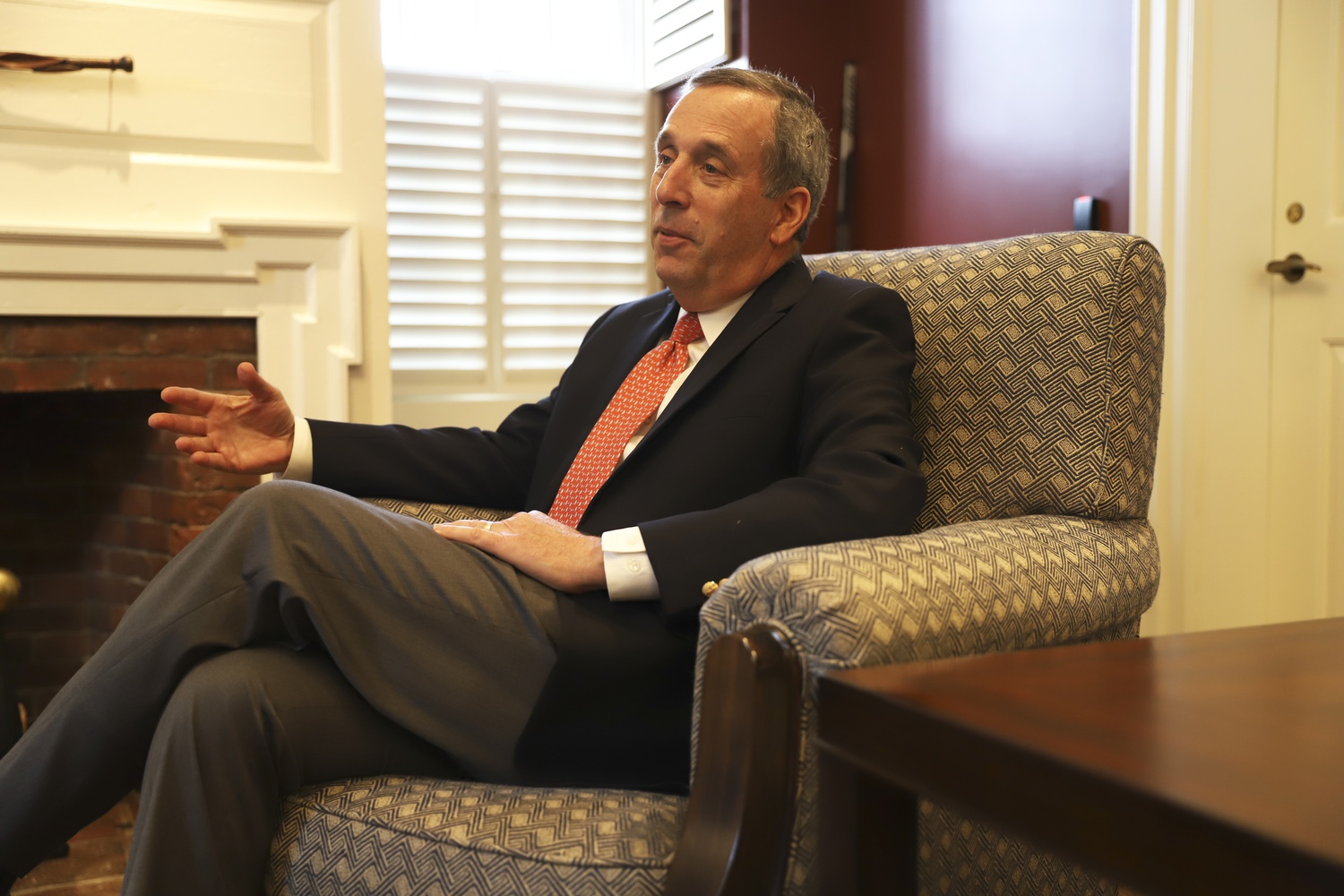 President Lawrence S. Bacow discusses a review of donations made by Jeffrey Epstein during a Monday interview. By Kathryn S. Kuhar
By Alexandra A. Chaidez and Aidan F. Ryan, Crimson Staff Writers

University President Lawrence S. Bacow said in an interview Monday an external law firm is assisting the Office of the General Counsel in their review of donations made to Harvard by billionaire and convicted sex offender Jeffrey E. Epstein.

Bacow announced in an email to Harvard affiliates last month that the University would review Epstein’s donations, writing that his connections to the school “raise important concerns.” Just over a week after Bacow’s announcement, Vice President and General Counsel Diane E. Lopez disclosed that the Office of the General Counsel would be conducting the review in an email to Harvard affiliates.

Bacow said Monday he made the decision to have the Office of the General Counsel conduct the review. The University also hired Boston-based law firm Foley Hoag to aid in the process.

Bacow said that including external counsel in this review was the proper route to take for this investigation.

“It seemed like the appropriate thing to do under the circumstances to ensure that people felt comfortable talking,” Bacow said.

Epstein had long-standing ties to Harvard, donating nearly $9 million to the University between 1998 and 2007 — including a $6.5 million gift to support the Program for Evolutionary Dynamics. Bacow wrote in his email last month that most of the money Epstein gave to Harvard has been spent, but an unused portion totalling $186,000 would be given to organizations that support victims of both human trafficking and sexual assault.

The billionaire and convicted sex offender died by suicide in August and faced multiple allegations of sexually abusing underage girls. The Miami Herald reported Epstein operated a sex ring out of his Palm Beach, Fla. home for years.

Roughly 80 women said Epstein molested or sexually abused them before 2006, according to the Herald. Epstein only spent 13 months in a county jail after federal prosecutors arranged an extraordinary plea deal. The 2008 prosecution was led by former United States Secretary of Labor R. Alexander Acosta ’90, who resigned after federal prosecutors in New York opened a new investigation into Epstein.

In Monday’s interview, Bacow said the University is investigating Epstein’s financial ties to ensure they have a “good handle” on the donations he has given.

“We think we understand what he’s given directly and the timing of those gifts,” Bacow said. “There were allegations and representations by some that he may have directed gifts from others. We're trying to understand if that happened.”

Bacow said he did not have a timeline for the investigation but that it will “last as long as it needs to.”

“We want to make sure that it's done thoroughly and correctly,” Bacow said. “I'm not going to put a limit on the timing.”

Bacow also declined to commit the University to releasing the results of the review after it is completed.

“I don’t know what the results of the review will be,” Bacow said. “We’ll make that decision when the time comes.”