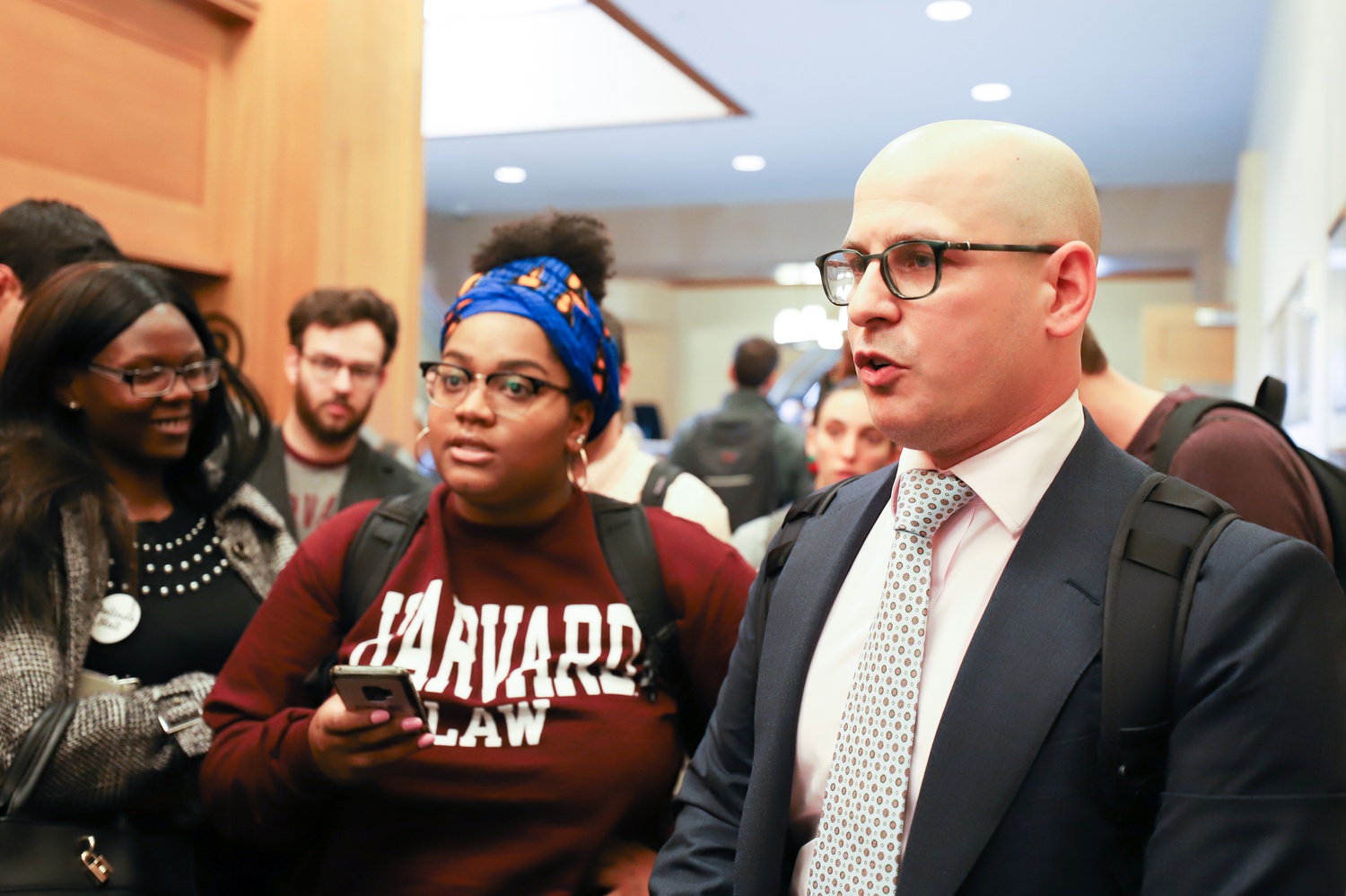 Following a Harvard Law School event last week featuring a lawyer representing anti-affirmative action group Students for Fair Admissions in its lawsuit against Harvard, several students engaged in debate over comments about discrimination against Asian American students made during the event.

At the event, Mortara challenged Federal Judge Allison D. Burroughs’s acceptance of discrepanies in personal ratings between Asian American students and those of students from other racial background as insufficient evidence of discrimination.

"No one — not Judge Burroughs, not Harvard — has ever explained how it is that African Americans and Hispanics just have much better objective personal qualities than white and Asian applicants,” he said.

“I guess there's just something more personally appealing about African American and Hispanic applicants,” Mortara quipped. In response, at least a dozen students in the crowd voiced their opinions and shouted back, “There is!”

Following the event, some students said they felt that their concerns about discrimination against Asian American students on campus were invalidated. Board members from the Asian Pacific American Law Students Association sent an email about the event to their members, acknowledging that the comments at Mortara’s talk “disturbed” some students.

“To those of you who were hurt by this or who spoke up about this, you are not alone. Vocalizing feelings of discomfort in a public forum takes courage. Doing so in an environment with complex histories and strong tensions is difficult. We thank you for standing up for our community and each other,” APALSA wrote.

Paul Caintic, a student who attended the event, wrote in a group chat with students from the Law School’s sixth 1L section that he felt students laughing in response to Morata’s comment was racist. The Law School divides its first-year students into several sections within which they take classes together.

“Today, a group of students announced that I had an objectively worse personality than them because of my race,” he wrote in a portion of the group chat exchange reviewed by The Crimson. “They laughed about it. Call it what you want. I call it racism.”

Caintic said in an interview that he recalled growing emotional when he heard students laugh at Mortara’s comment.

Caintic’s message sparked a tense exchange between several students discussing whether the Tuesday event incident was racist or not.

Law School student Naneka Bakare wrote in the group chat that the event caused unproductive infighting among students of color.

“Today a group of students had a lunch talk about why black and brown students don’t deserve to be admitted to Harvard,” Bakare wrote. “Call it what you want. I call it racism. The point is there shouldn’t be infighting among POC when the real issue is systematic racism against all POC.”

Bakare did not respond to multiple requests for comment.

“I don't think that the people in the group chat, who were talking, necessarily had, like, malice in their hearts in replying to me, but what I would say is that it felt as if they were trying to minimize what had happened in that room and the remarks that were made and the insinuation that Asian Americans have objectively worse personalities than African Americans,” Caintic said.

Law student Erica Taicz Blandón wrote in her response to the conversation thread that it is unfortunate to hear that people affirmed the statements about Asian American students, but that black people could not be racist.

“Also hey hey ho ho, Black people can’t be racist, let’s not imply that here. Racism is so powerful because it involves *deeply* entrenched *systemic* imbalances which benefit and empower the person who acts individually,” she wrote in the group chat. “I’m truly sorry to hear that anyone was directly or indirectly saying that Asian Americans have worse personalities, that is unacceptable.”

Blandón wrote in an email to The Crimson — similar to other statements in the group chat — that she condemns the Federalist Society’s role in hosting the event.

The Federalist Society did not respond to multiple requests for comment.

Another student in the group chat, Sarah Rutherford, replied to the growing thread that she had booked a room for students to discuss the issue in person.

“Just want to take a moment to thank those who were courageous enough to share their thoughts and educate us yesterday,” Rutherford wrote. “If you’re anything like me and you don’t always know what to say in these conversations, try listening.”

Rutherford wrote in an email to The Crimson that she wanted to bring her classmates together because the debate had “such an incendiary impact on us.”The group chat debate, however, was not the only conversation at the Law School about the forum incident.

“I think we can all say that, the ensuing discussion about the issue overall and about the event in particular has been very productive,” Chen said. “We’ve seen and heard about a lot of engagement from our members and from the larger community. We’ve engaged in conversations with other affinity groups on the HLS campus.”