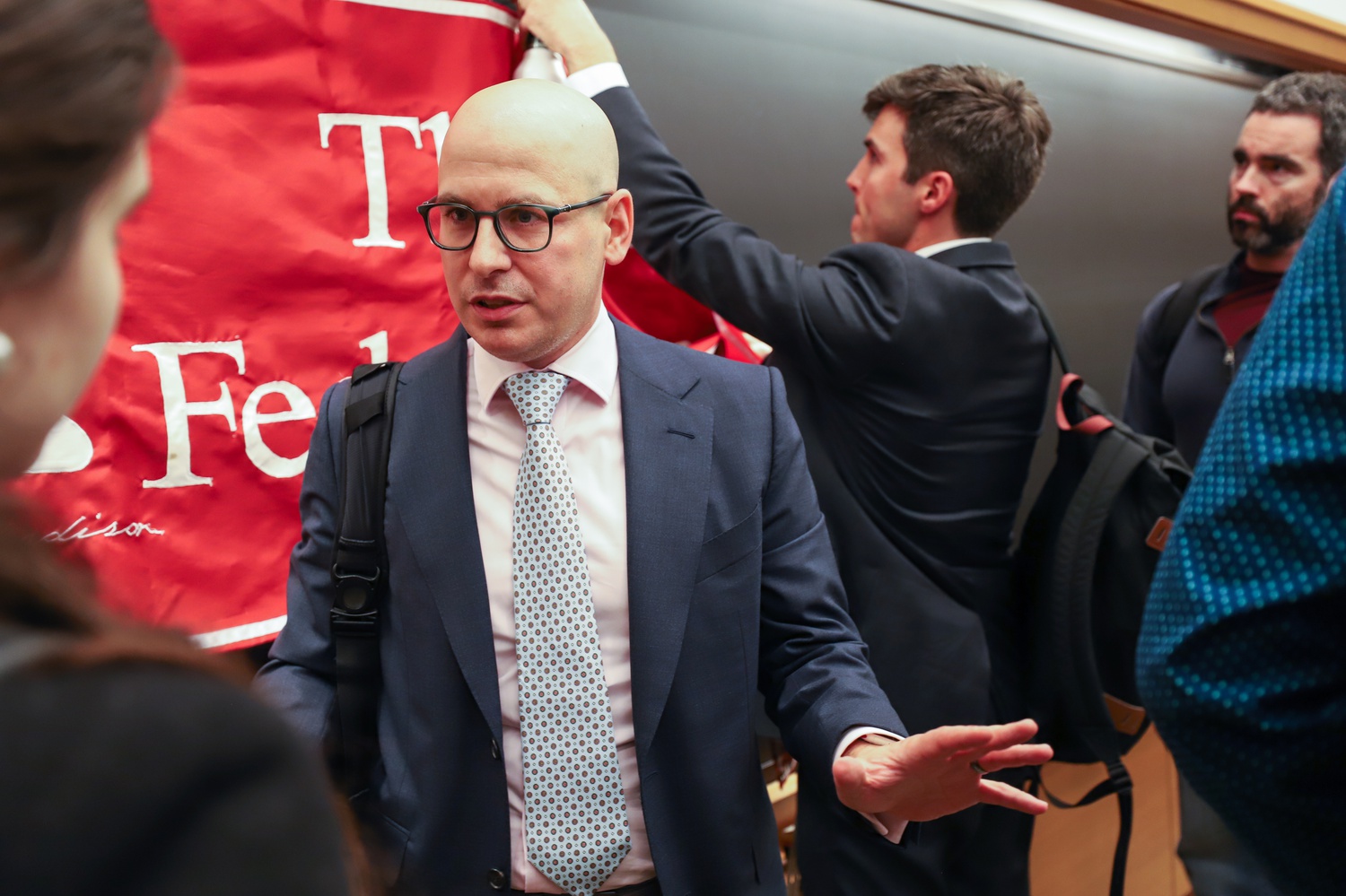 The event — co-sponsored by the Harvard Federalist Society and the Native American Law Students Association — marked the first time Mortara has publicly spoken about the ruling and attracted hundreds of law students.

Judge Allison D. Burroughs ruled Oct. 1 that the College is not liable for any of the four counts alleged by anti-affirmative action group SFFA. Those counts include intentional discrimination against Asian Americans, engaging in racial balancing, using race as a determinative factor in admissions decisions, and inadequately exploring race-neutral alternatives to achieve diversity.

Just three days after Burroughs announced her decision, SFFA filed a notice of appeal. Mortara — who is listed as a “contributor” to the Federalist Society on its website — said Tuesday that he will continue to litigate the case throughout the appeals process.

At the event, Mortara said he believes Burroughs — an Obama appointee who Mortara called “dedicated” and “even-handed” — made a “bad ruling” in this case. He categorized what he sees as her errors into “three buckets”: differences in interpretation of Supreme Court precedent, incorrect analysis of the facts, and “hugely troubling” statements.

Burroughs did not immediately respond to a request for comment early Wednesday morning.

During his speech, Mortara alleged that Harvard runs a “thinly disguised quota system”; the Supreme Court has ruled that racial quotas in admissions processes are illegal. He pointed to past statistics for admissions rates by race, arguing that they showed “remarkable stability” and did not change drastically until SFFA sued Harvard. At that point, Mortara argued, the number of admits increased.

“Stability over 10 years and a remarkable increase by nearly 30 percent in the number of Asian Americans on campus after they got sued — what does that prove? It proves they have control,” Mortara said.

Mortara also described Burroughs’s interpretations of the facts of the case “facially absurd and wrong.”

The lawsuit has exposed thousands of pages of internal documents, shedding light on the College’s famously secretive admissions process. One such document was a 2013 report by Harvard’s Office of Institutional Research, which found that Asian American applicants consistently receive lower personal ratings — numerical scores assigned to applicants based on abstract qualities like “humor” and “grit.”

At the event, Mortara questioned why Dean of Admissions and Financial Aid William R. Fitzsimmons ’67 did not act on these findings or alert other top administrators about them. Mortara asked why Burroughs took Fitzsimmons’s response on face.

“Doing nothing about this is not an indicia of being completely innocent, to say the least,” Mortara said. “Yet Judge Burroughs — my friend — said that he knew this couldn't be true.”

At the trial in October, Fitzsimmons said the admissions office did not make any “fundamental” changes following the 2013 report.

"No one — not Judge Burroughs, not Harvard — has ever explained how it is that African Americans and Hispanics just have much better objective personal qualities than white and Asian applicants,” he said. “They've never done it.”

“I guess there's just something more personally appealing about African American and Hispanic applicants,” Mortara quipped. In response, at least a dozen students in the crowd voiced their agreement, shouting, “There is!”

Mortara drew attention to the facts on “privilege preferences” — the College’s stated preference for athletes; legacies; children of faculty; and students on the Dean’s and Director’s lists, which often contain children of donors or prominent individuals. He argued that they advantage white applicants and that without these preferences, there is substantially less cause for race-based affirmative action.

In her decision, Burroughs said that eliminating these preferences “come at considerable costs,” including adversely affecting Harvard’s ability to attract high-quality faculty and to “achieve desired benefits” from relationships with alumni.

Mortara also conjectured that Burroughs had conflated “liability and remedies” in the case. Mortara said he thinks she was unwilling to rule in favor of SFFA because the remedy they seek is so extreme: the end of race-conscious admissions policies.

“I'm against all sort of invidious racial discrimination,” Kennedy said. “[Racial discrimination is] not the same thing as having a policy that adversely affects a group in the effort to effectuate a reasonable — and in this instance, an admirable — mission.”

Kennedy also spoke about the “history of so-called reverse discrimination claims” dating back to the Civil Rights Act of 1866, which sought to extend minorities the rights to enter into contracts, to testify at trials, to sue, and to be sued. Even the most “classic civil rights” were contested on the basis that they gave “discriminating protection to the colored people,” Kennedy said.

Kennedy and Mortara both agreed that Supreme Court jurisprudence on affirmative action is currently inadequate.

Though Mortara bemoaned its inconsistencies and vagueness, Kennedy said that the law’s exclusive focus on the value of “diversity” — rather than social integration or reparatory justice — is “ridiculous.” The Supreme Court has previously ruled that promoting diversity is one of the few acceptable reasons for a race-conscious admissions policy.

After the 45 minute event, Mortara promised to stay at the Law School to answer questions. Over the course of two and a half hours, he fielded questions from dozens of students over whether society “needs” racial affirmative action.

Despite the recent loss in district court, Mortara said at the event he believes race-based affirmative action in higher education is “dying.”

He predicted that either the Supreme Court will strike down race-based affirmative action, or that the lawsuit against Harvard will expose a “morally repugnant system of privilege preferences,” leading to extreme backlash.

“Historians are going to say that Harvard itself struck the mortal blow,” he said.