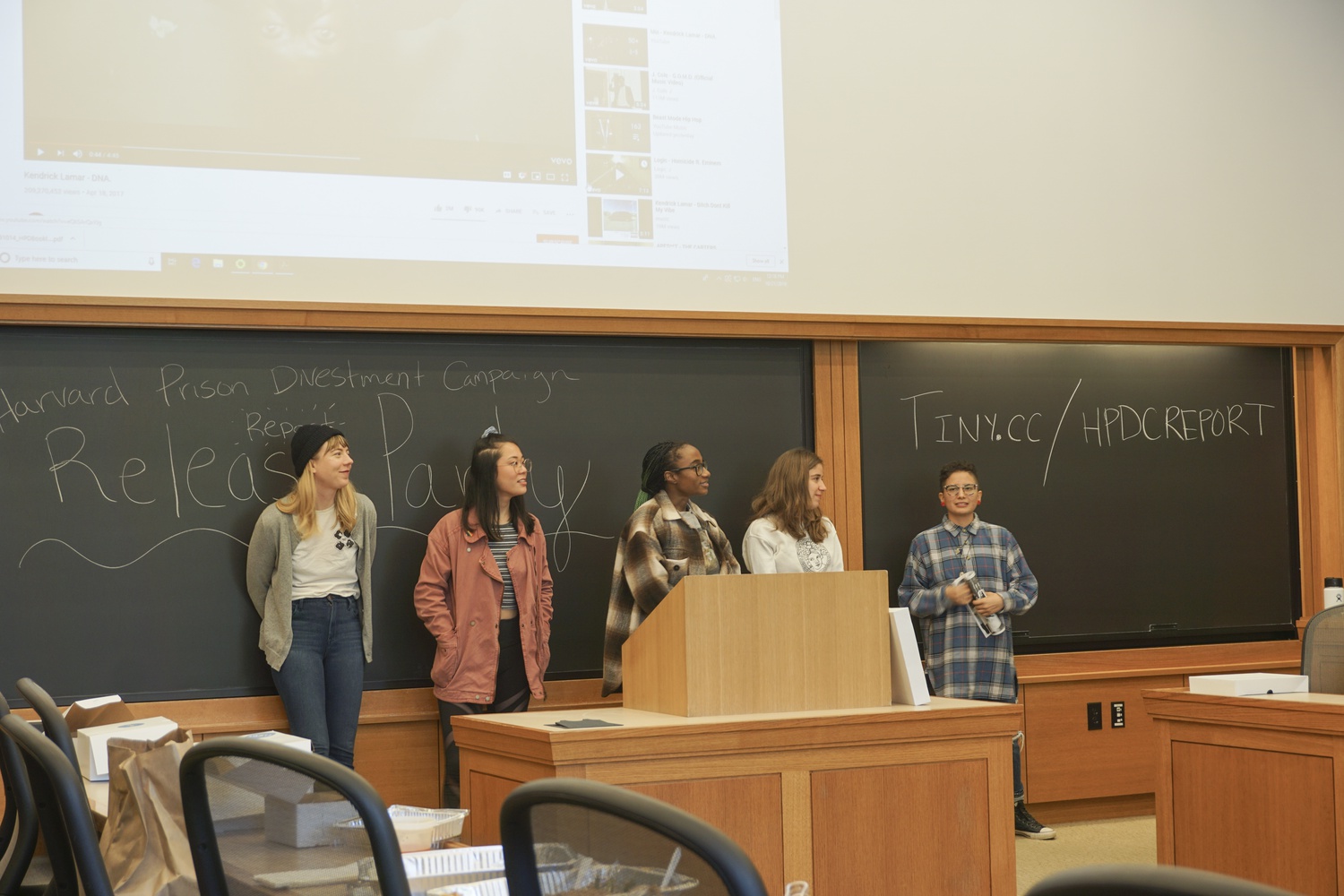 Students involved with the Harvard Prison Divestment Campaign spoke at the Harvard Law School on the first day of the group's Free-Them Week. By MyeongSeo Kim
By Alexandra A. Chaidez, Crimson Staff Writer

The delivery kicked off “Free-Them Week,” a week of seminars and workshops hosted by HPDC to promote prison divestment. The events will include a discussion about socially responsible investing, a session about restoring the right to vote for prisoners in Massachusetts, and office hours held by HPDC members.

Xitlalli Alvarez Almendariz, a Ph.D. student and HPDC organizer, said the report was the product of months of work from the group.

“This report is the culmination of a lot of months’ work, and I would say year’s worth of work by students who founded HPDC and who have been working on this issue from all different angles,” Almendariz said.

HPDC was formed in 2017 to call for the dismantling of the U.S. prison system and advocate for Harvard to divest from the prison industry. Since then, the campaign has launched petitions, led rallies in Harvard Yard, and met personally with University President Lawrence S. Bacow to discuss prison divestment.

Amanda T. Chan, a Law School student and HPDC organizer, said the report is a “resource” for Harvard affiliates and those outside of the school

“People deserve to know that their educations are being funded by prisons, by the systemic abuse and torture of black and brown people,” Chan said. “It's honestly simply unacceptable that we get to sit in these beautiful hallways and eat this amazing food because of prisons, so if anyone has any questions about how Harvard is entangled with the prison industrial complex, this report gives a really good resource and in-depth background on the problem.”

University spokesperson Jason A. Newton referenced previous comments made about the report.

“President Bacow has met with advocates for prison divestment,” Newton wrote last week. “He has also invited them to meet with members of the Corporation Committee on Shareholder Responsibility and looks forward to further discussion.”

HPDC is scheduled to meet with Bacow and the Corporation’s Committee on Shareholder Responsibility on Oct. 28. The CCSR is a subcommittee of the Harvard Corporation — the University’s highest governing body — that advises the University on matters related to social responsibility in its investment decisions.

After the group reviewed the report, 10 members of HPDC walked from the Law School to Mass. Hall to deliver their findings and demands to University administrators. The protestors began chanting as they walked into Harvard Yard and continued their cheers as two students entered the administrative building.

“I'm so excited to be at Harvard, it's like an honor to be at this institution and then to find out that Harvard invest in prisons as things that just tear people down made me feel a lot worse about being here,” Multhaup said. “But then luckily, I met these amazing organizers who are involved in the prison divestment campaign.”

Chan said the report was a way to institutionalize and spread the campaign’s mission.