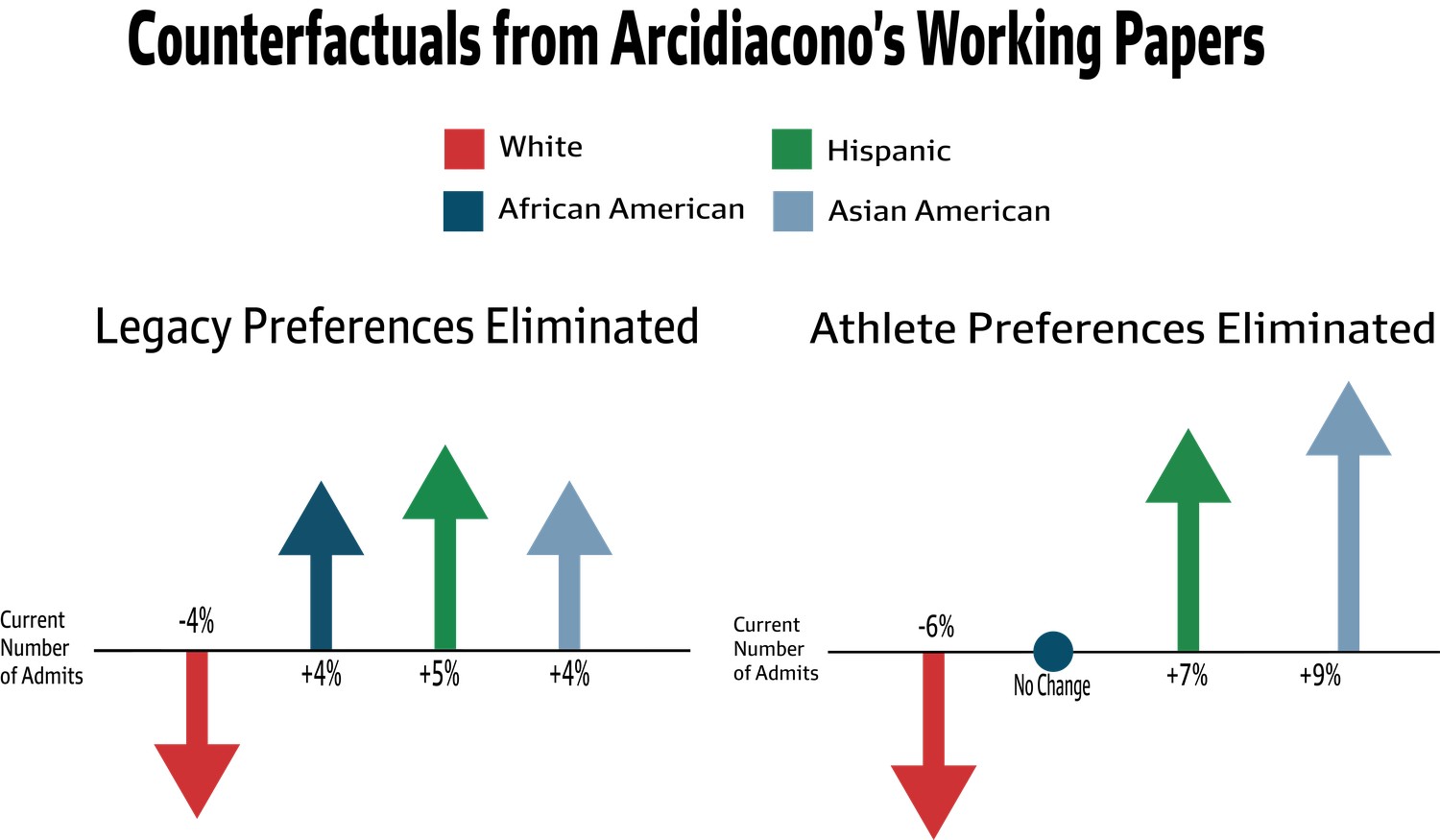 Forty-three percent of white admits to Harvard College are athletes, legacies, children of faculty, or members of a hand selected list curated by top administrators, according to working papers by Students for Fair Admissions-hired expert witness Peter S. Arcidiacono.

The papers — accepted to the National Bureau of Economics Research last month — use data that the College made public as a part of its ongoing lawsuit with SFFA, an anti-affirmative action advocacy group. SFFA sued Harvard in 2014 alleging the College discriminates against Asian American applicants.

Arcidiacono — an economics professor at Duke University — co-authored the papers, which focus on admissions preferences for applicants to the College who are legacies or recruited athletes. Neither paper has been peer-reviewed; working papers are typically made public to engender discussion and feedback prior to formal publication.

The first paper revealed that 43 percent of white admits to the College are athletes; legacies; on the Dean’s or Director’s lists, which contain relations of donors and high-profile figures; or children of Harvard employees — together referred to as “ALDCs.” In contrast, less than 16 percent of African American, Hispanic, and Asian American admits are ALDCs.

The paper included several counterfactuals to simulate the admissions process without preferences for legacies or athletes. In both scenarios, the number of white admits decreased. For example, only one quarter of white ALDC admits would have been admitted had they been treated as non-ALDC applicants.

Removing preferences for legacies and athletes would increase the number of African American, Hispanic, and Asian American admits, according to the papers.

“I wish Mr. Arcidiacono had made these results public before the case was settled, because in some sense I think it undercuts the case,” Holzer said.

Adam K. Mortara, the lead counsel for SFFA, has said that preferences for ALDCs — which he alleges are “white preferences” — necessitate affirmative action. He believes both should be done away with.

“Once that happens, the need for race-based affirmative action goes dramatically down, because these places aren't being set aside for whites,” Mortara said at a Harvard Law School event earlier this month. “In our alternative Harvard, we have to get rid of the privilege preferences, and increase socioeconomic preferences. And what they will get is a class of comparable racial diversity.”

Despite falling from 7.5 to 4 percent of applicant pools over a period of 18 years, legacies and athletes have comprised a relatively stable portion of admitted classes — averaging 24 percent of each.

The paper found that despite the increasing number of minority legacy and athlete admits, the admissions advantage for legacies and athletes still reduced racial diversity at Harvard between the Class of 2000 and 2017.

“They contribute to everybody's lower rates of admissions,” Holzer said. “There might be reasons why Harvard and other elite schools give preference. We know that donors like it, we know the legacies give more money, all those reasons, but I think it's an important piece of work, and to me it undercuts at least one of the arguments that SFFA was making.”

Warikoo said she found the results “interesting” in light of recent attacks on affirmative action.

“These are the ways in which whiteness gets privileged in college admissions, and the interesting thing to me is the way that policies like affirmative action that are designed to increase access actually get attacked, rather than the policies that are — one could argue — discriminatory towards all students of color, including Asian Americans,” she said.

Arcidiacano wrote in an email that he plans to write more papers on Harvard’s admissions practices using data unearthed during the lawsuit.

“This sort of information is tightly guarded by universities,” he wrote in an email. “What we are doing in these two papers (and there will be more to come on other aspects of the case) is show what these documents reveal about various aspects of Harvard’s admissions process.”