Portrait of an Artist: David Krakauer 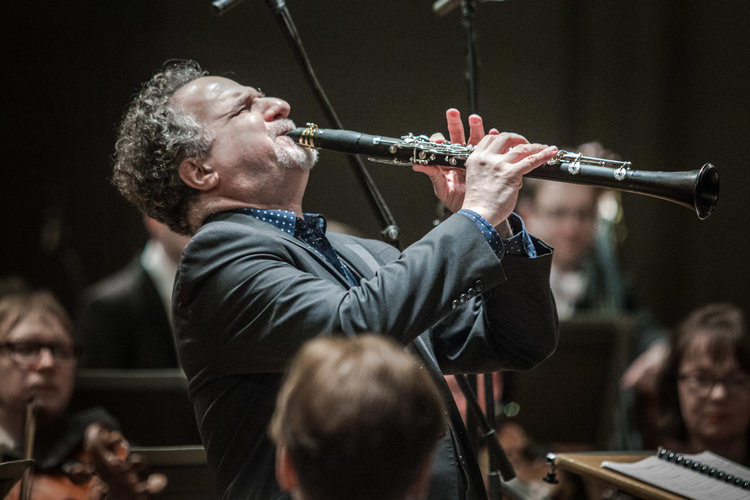 David Krakauer is a Grammy-nominated clarinetist who performs jazz, classical, and klezmer music. In 2015, Krakauer received a Grammy nomination as a soloist with the self-conducted chamber orchestra “A Far Cry,” and a Juno nomination for the CD “Akoka.” In November, Krakauer is set to perform with the Boston Modern Orchestra Project. The program includes the Boston premiere of Mathew Rosenblum’s clarinet concerto “Lament/Witches’ Sabbath” and Wlad Marhulets’s “Concerto for Klezmer Clarinet.” The Harvard Crimson spoke with Krakauer about his music background and upcoming concert program.

The Harvard Crimson: Tell us about your background. What drew you to music?

David Krakauer: It’s a long story. I started playing when I was 10 years old in elementary school. My late mother was a violinist. She said to me, “Oh, you’re way too old to play the violin. So you should play a wind instrument.” And that’s how I got started on the clarinet.

As a teenager, I was playing both jazz and classical music. But when I was in my early 20s, I kind of had a crisis of confidence about jazz. I sort of thought I would never find my own voice and that I would never be able to be original. So I decided to focus on classical music. Throughout my 20s I was doing a lot of chamber music. And then in my early 30s, again, I had this kind of crisis when I was thinking, “wow, I really want to improvise, I want to get back to that side of me.” I felt like I had thrown the baby out with the bathwater.

Slowly, I began to get into the music of my cultural heritage, Eastern European Jewish klezmer. At first I started playing very small bands in very modest situations, just to learn the style. It was an interesting time because there was a kind of a second revival of klezmer brewing. The Berlin Wall was about to fall. This was the time of Gorbachev and Perestroika. People were reading “The Unbearable Lightness of Being” and novels like that from Czechoslovakia. All of this cultural stuff was kind of coming out of Eastern Europe in the late ‘80s, and this was kind of creating the soil for a second klezmer revival. I didn’t know that at the time. I was just looking to play some music, but I did have this urge to follow the social and cultural currents. That drew me towards klezmer music.

THC: What does making music mean for you? What do you hope to convey to your audience?

DK: When people come to hear my concerts, a word they use a lot is generosity. They say, “Thank you for your generosity.” I think that it’s very important to come on stage and not just play a lot of pretty notes, but to convey emotions and to make people feel things and make people think. The beauty of music is that it’s a great opportunity to share those sorts of things. It’s not just to make people happy. Sometimes there are songs that are very sad, but you get a whole room full of people really feeling together. It’s a great honor really, for me, to be able to have a platform and play my music and inspire people.

THC: Tell us more about the two works you’ll be performing in the Boston concert. What can concertgoers expect from your upcoming shows?

DK: I’ll be playing two different clarinet concerti. These are two pieces of music that I’m very closely connected to. One piece I’m doing [“Lament/Witches’ Sabbath”] is by the composer Matthew Rosenblum, and we recorded this piece together. It’s an extremely personal piece for Matthew. One time I met him he said, “You know, I have this idea. I want to write something.” He was talking about his grandmother who would sing, who would tell the story of her flight [as] a girl. Her town was being burned down, and all the people were being killed in the town because there was a lot of anti-Semitism back in the early 20th century. His grandmother would tell him the story of kind of half speaking, half singing, kind of crying through the whole thing. So he was haunted by this idea of his grandmother telling the story. After we had recorded it, I sat back and listened to the piece without being an active participant. I was like, “This actually sounds like fear itself.” The piece really is a crazy scream.

The other concerto that I’m performing [“Concerto for Klezmer Clarinet”] has a crazy story to it too. Back about 11 or 12 years ago, I got an email from a young man with Jewish roots living in Poland. He wanted to write some music for me. I heard a demo of his music and I said, “Wow, this is incredible. You should definitely do that.” And so I said, “Why don’t you write a clarinet Concerto for me?” I played the piece with various orchestras in Europe. I’m really excited to play it in Boston. This will be a very important American performance of the work.

THC: Any last words of wisdom you’d share with young and aspiring musicians?

DK: I would say for any musicians: follow your dreams, follow your heart, and do what you want to do. But be clever about it. It’s a very hard profession. It’s hard to make a living. Try to seek out every opportunity and use your potential to the fullest. I feel like it’s important to be a musician, but it’s also very important to be a human being.