Single Review: With 'Harleys in Hawaii,' Katy Perry Should Go Back to California, Gurl 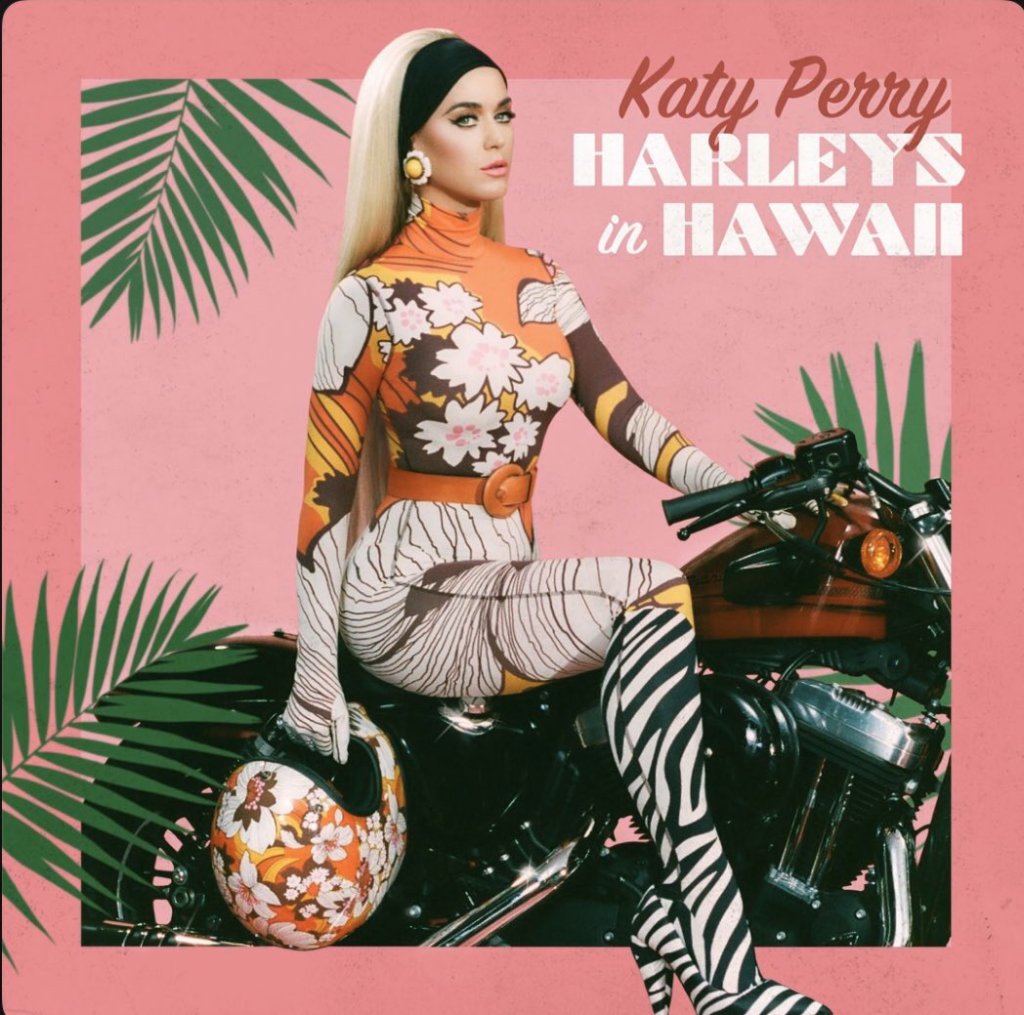 Cover art for "Harleys in Hawaii." By Courtesy of Capitol/Katy Perry
By Ilana A. Cohen, Contributing Writer

With a catchy but otherwise unremarkable beat and borderline offensive lyrics, Katy Perry’s latest single, “Harleys in Hawaii,” is not only tired, but also incurs a nails-on-the-chalkboard level of cringe.

“Harleys in Hawaii” tells the story of an exotic island romance. Katy Perry escapes from drab reality on the back of a male stud’s motorcycle to a land of cotton candy-colored skies and hula hoops — the epitome of “good times” and “chill vibes only.” The song’s constant repetition of words — “When I hula-hula, hula / So good, you’ll take me to the jeweler-jeweler, jeweler”— reinforces the almost hallucinogenic level of tranquility it seeks to cultivate. Everything in this imagined Hawaiian world is carefree and superficial, with no troubling realities to bog Katy Perry and her island down. Meanwhile, the drawing out of “Hawaii-ii-i” makes her getaway fantasy feel infinite. Hawaii just goes on and on and on…even when the listener no longer wants it to.

Without any particularly memorable lyrics or distinct musical qualities, it seems unclear why Katy Perry, a well-established artist, would record what many might consider trashy pop. In addition to its generic nature, “Harleys in Hawaii” lacks a critical level of social consciousness. The depiction of Hawaii as a carefree landscape where Katy Perry can live it up feeds into misleading and privileged perceptions of the island within the greater public as purely a tourist destination. There is zero recognition in the song of any local culture or distinct aspects of the island — Hawaii exists only in the image its reputation cultivates. The song largely sounds like it could have been set anywhere, if not for the alliteration of “Harleys” and “Hawaii.”

The song also tokenizes Katy Perry’s lover, who seems to serve mostly as a vehicle for her fantasy exploits. At the same time, the song infantilizes its female protagonist. Even if Perry does ride a Harley on her own in the music video, she spends most of the time flipping her hair, sipping a piña colada, and acting like she’s on LSD. All the while, the lyrics suggest no dimension to her character outside of her very clearly stated interest in riding on the back of a man’s Harley in Hawaii — and, perhaps, hula-hooping.

This song is a sad fall from Katy Perry’s glory days of “I Kissed a Girl,” “Hot N Cold,” and “California Gurls.” Her provocative, yet well-crafted lyrics in these golden oldies communicate deeper messages to her listeners about defying convention and embracing the spectacle in life. These songs were uniquely and unapologetically “Katy.” From their lyrical content to their more original composition, Katy Perry, in her late 2000s and early 2010s beats, cultivated a sound of her own. Even more recent songs like “Never Really Over,” which tend to have simpler and fewer lyrics, hold some weight by comparison. “Harleys in Hawaii,” does not. The song reflects a pitiful erasure of the iconic Katy Perry that so many people have come to know and love. It sounds like the stock footage of the contemporary pop industry — succeeding, perhaps, at capturing a broader musical trend, but unoriginal and indistinguishable from the general noise.

One can only hope that the old Katy Perry will resurface in a more ambitious single in the future. If “Harleys in Hawaii” is any indication of the Katy Perry to come, it might be time to tune her out.