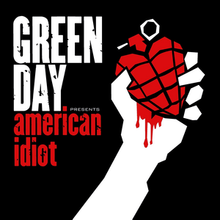 15 years ago, Green Day released the self-proclaimed “punk rock opera,” “American Idiot.” The seventh of the California-based group’s 12 studio albums, “American Idiot” reignited Green Day’s popularity with a younger audience after their previous album, “Warning,” failed to achieve the same commercial success as their earlier albums. The Grammy award-winning LP exemplifies the feelings of disillusionment and insignificance felt by many during the aftermath of 9/11 and the beginning of the Iraq War. Today, “American Idiot” is still as politically relevant as ever.

“American Idiot” is a concept album that tells the story of the Jesus of Suburbia, an adolescent looking for something bigger than the life he is living in an inescapable small town. Although originally written as a middle finger in the face of the Bush administration, the album continues to hold merit in 2019 during another, maybe more so, politically tumultuous era. The band’s lead singer Billie Joe Armstrong changed the lyrics in the title track “American Idiot” from “I’m not part of a redneck agenda” to “I’m not part of a MAGA agenda” at the 2019 iHeartRadio Music Festival, demonstrating that “American Idiot” is an everlasting and adaptable song (and album) intended to hold a mirror up to the country’s political climate.

“Jesus of Suburbia” is a nine minute track split into a series of vignettes that depict the boring, small town life of the concept album’s lead character and his decision to leave for the big city. The life of the Jesus of Suburbia exemplifies those of people stuck in suburban wastelands, both in 2004 and today. Green Day empathizes with those born, raised, and trapped in small, lower-income towns where the education system has failed the locals, the government ignores — or in the case of Flint, Michigan, poisons — those in need. It is an anthem to all the hometowns where everyone knows everyone’s name and business, and no one aspires to leave.

On “Holiday,” a classic example of head-banging rock music, the chorus “I beg to dream and differ from the hollow lies / This is the dawning of the rest of our lives / On holiday” reflects a refusal to be complicit in the atrocities perpetrated by the government. During the bridge, Armstrong refuses to comply with an administration which he sees to be aligned with a fascist regime. “Holiday” holds some of the most political relevance today of any song released in the early 2000’s. “Holiday”’s comparison of congresspeople to Nazis has, unfortunately, aged well. The distaste for the political climate of 2004 is mirrored today by adolescents who are at the frontlines of protests calling for political action like Greta Thunberg and Emma González. These are the earthly saints that a motivated Jesus of Suburbia could be — the ones Green Day said the world needed through this album.

While some songs on the album actively protest the politics of the early 2000’s and today, “Boulevard of Broken Dreams,” “St. Jimmy,” and “Give Me Novacaine” exhibit the effects of these tumultuous times on the masses. “Boulevard of Broken Dreams,” Green Day’s most commercially successful song, speaks to those who feel alone despite being surrounded by people. “St. Jimmy” and “Give Me Novacaine” reflect a desire to be distracted from reality. On these two songs, the protagonist finds himself searching for answers to his life’s problems in hard drugs, sex, and bad decisions in the same way that adolescents today over indulge in social media, niccotine, and mediocre alcohol.

Fifteen years, one Grammy, a Broadway musical adaptation, and being cemented as Green Day’s first number one album in the United States later, “American Idiot” remains as politically relevant and relatable as it was in the early 2000’s. With its themes of disillusionment and desire for revolution, “American Idiot” will remain resonant until the day the United States is no longer split across party lines, the members of the human race are no longer at war with one another, there is an end to our drug epidemic, those who live in suburbia can successfully find their way out, and those raised in big cities no longer become jaded.

— Staff Writer Annie Harrigan can be reached at annie.harrigan@thecrimson.com.