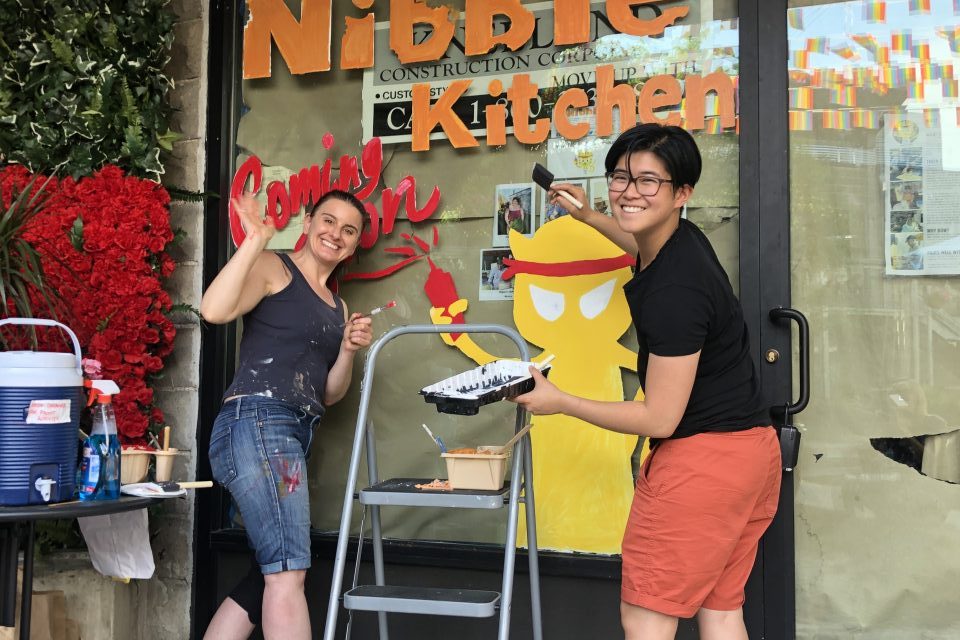 Nibble Kitchen, a new restaurant in Somerville featuring a rotating international menu prepared by chefs from a wide variety of countries, had its soft opening on Sept. 26. According to the Nibble mission statement, the restaurant focuses on supporting immigrant communities and promoting social justice at a local level.

Nibble Kitchen stems from the broader Nibble program, the culinary division of the Somerville Arts Council. Nibble has previously offered opportunities for culinary entrepreneurs to vend around town at farmers markets and festivals. Their ventures have grown since then, eventually culminating in the creation of a brick and mortar establishment called Nibble Kitchen. Nibble Kitchen is nestled in a corner of Bow Market, a public courtyard with restaurants and shops in the Union Square neighborhood of Somerville. Nibble Kitchen is currently in the midst of its month long soft opening phase.

For many of the chefs, working at Nibble is their first time cooking in a professional setting. Kitchen manager Aly P. Lopez is one of the people who helps them meet American restaurant requirements.

“We want to make sure people understand that there is still an immigrant community in Somerville. As the changes are happening here in the city, we want to make sure that we support those communities,” Lopez said. “[Working at Nibble Kitchen] is important on different levels … for the city to understand that there is this immigrant community that is being pushed away and how beautiful it is.”

“Union Square is changing so much because of gentrification, and one thing that we’ve always loved about Union Square is the diversity — and that’s really evident in the food landscape. So having Nibble Kitchen here is one small way we can preserve diversity in Union Square,” said Rachel M. Strutt, the cultural director of the Somerville Arts Council.

Chef Robson Lemos said the main inspiration for his dishes is the diversity present in his hometown of Bahia, Brazil, where there are people of Portuguese descent, African descent, and indegenous descent.

“Every single dish, every single food has history and has culture,” Lemos said.

He makes acarajés, a cake made of black eyed peas with onions and salt. He tops them with shrimp, salsa, and an Afro-Brazilian peanut sauce called vatapá. He also offers a vegetarian version with loaded Brazilian salsa. His featured drink is a passion fruit juice.

Chef Sandra Suarez is from Guayaramerin, Bolivia, and specializes in quinoa-based dishes. She serves quinoa fritters with cheddar, spinach, and oats as well as a quinoa tuna sandwich. To drink, she offers quinoa mint horchata.

“I come first with much love and passion, bringing the original flavor of my land, my people, my Bolivian culture in super healthy and nutritious food,” Suarez wrote in an email.

“I think it’s exciting from a customer experience to come on different days of the week and find cuisine from a different part of the planet. I think it keeps it fresh,” Strutt wrote. “But most importantly it gives all our entrepreneurs a day of the week where they can work on their menu [...] and get a taste of what it’s like to run a restaurant. It’s very much a shared kitchen.”

In addition to Nibble Kitchen’s regular restaurant operations, it will also host culinary classes and events. Culinary coordinator Judy Yao will be heading the culinary classes, and she also plans Nibble events, like the upcoming Nov. 1 celebration for Dia de los Muertos.

“[Nibble] provides a space for our entrepreneurs to share their passion for food and their culture and their love for their history with the Somerville and greater Boston community. And so we’re fostering both the economic aspect of it — of folks being able to pursue their dreams and make a living — and also fostering cultural integration and connection with the local community,” Yao said.

Strutt agreed. “I think food brings people together and it gets people talking,” she said. “I think it will promote multiculturalism. That’s the hope.”