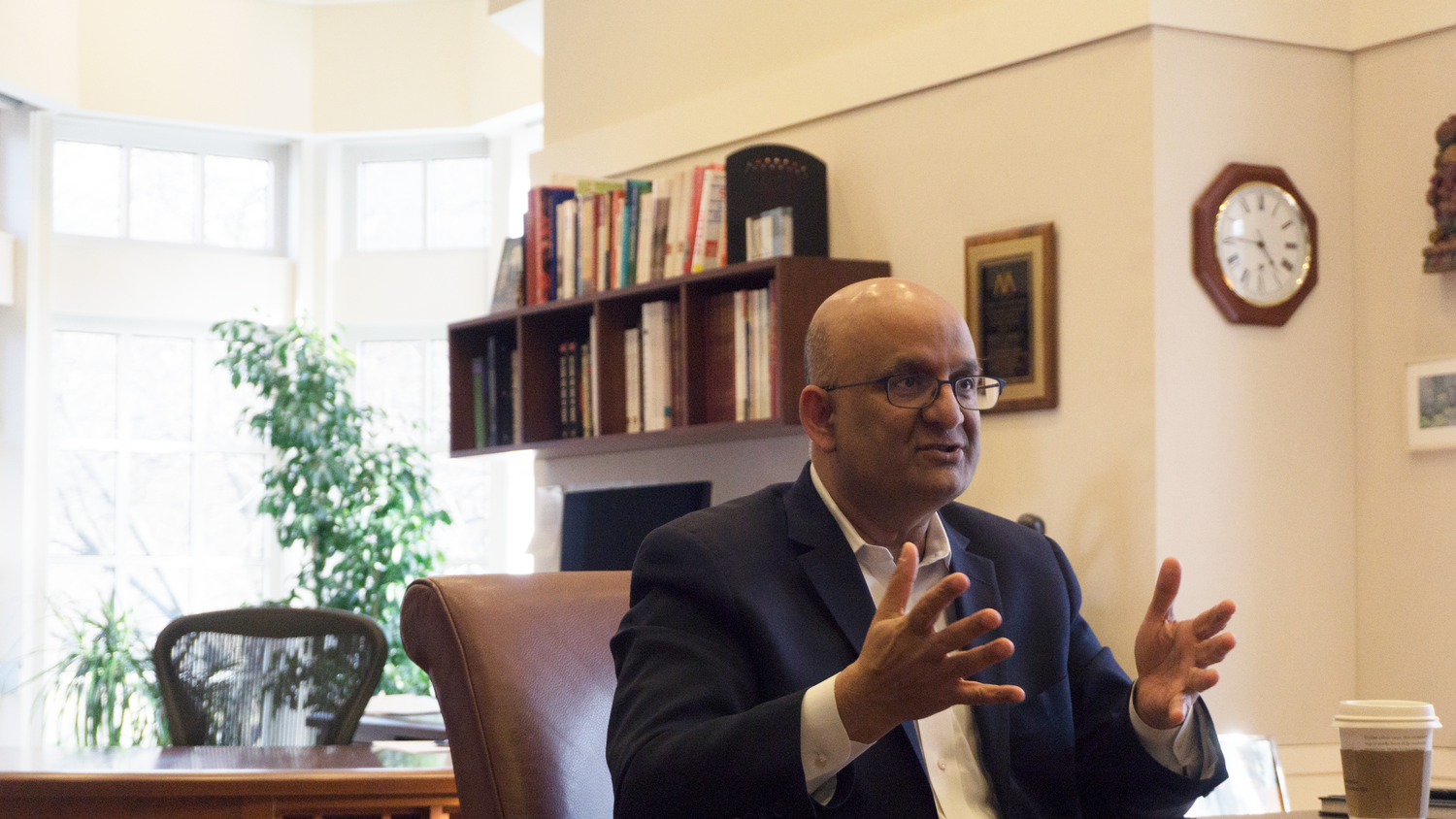 Harvard Business School Dean, Nitin Nohria, is pictured in his office in the spring of 2019. By Sharleen Y. Loh
By Ellen M. Burstein, Crimson Staff Writer

As Harvard Business School Dean Nitin Nohria prepares to step down at the end of the academic year, Business School faculty have praised his innovative leadership in prioritizing diversity at the school and fostering closer relationships between affiliates.

Nohria announced that he would step down on June 30, 2020 in an email to Business School affiliates Wednesday. He spent 22 years as a Business School professor before becoming dean in July 2010. During his tenure, the Business School launched Harvard Business School Online, offering online business school courses for students and professionals. Nohria also oversaw a record-breaking capital campaign that raised nearly $1.4 billion as part of a University-wide fundraising effort.

Bacow wrote in an email Wednesday that he and University Provost Alan M. Garber ’76 will soon start a search for Nohria’s successor.

Under Nohria’s leadership, the Business School has focused on its “five I” priorities: innovation, intellectual ambition, internationalization, inclusion, and integration. Nohria wrote in the email announcing his departure that the school had made “good progress” on the five priorities during his 10-year tenure.

Multiple faculty said Nohria’s tenure reflected his dedication to the Business School and his commitment to listening to the concerns of its affiliates. From the start, Nohria articulated his priorities for the school to make his tenure more effective, according to Jan W. Rivkin, the senior associate dean and chair of the school’s MBA program.

“Nitin declared his strategic priorities on the day he was named the dean-to-be, and he has stuck with those five priorities through his entire tenure,” Rivkin said.

“[The “five I” priorities plan] has been extraordinarily helpful for the school. I think we all have known what he prioritized and so we could go out and do the things that he thought we should do,” Rivkin added.

During his tenure, Nohria also worked to promote gender equality and increase the number of female administrators and faculty at the school, according to Senior Associate Dean for Culture and Community Janice H. Hammond.

Hammond noted that five of the 13 senior administrative deans are women.

“There's never been demographics like that in the dean's management group at HBS. And it makes a difference,” said Hammond.

“He's not someone who is going to be putting off people but quite the contrary, he's very good to involve everyone in the conversation to have every voice listened to, and to try to learn from, you know, the collective wisdom of a group,” said Viceira.

Several faculty said they will miss Nohria’s leadership and devotion to the school.

Gary W. Loveman, a senior lecturer at the Business School, met Nohria when both were Ph.D. students at MIT. Loveman said that the two young academics, despite being a year apart in school, bonded over their shared thesis advisor and a mutual love of the Celtics basketball team, of which Loveman now owns a small stake.

“He is deeply devoted to the school, and its mission — the education of leaders is something that he believes in very deeply,” Loveman said.