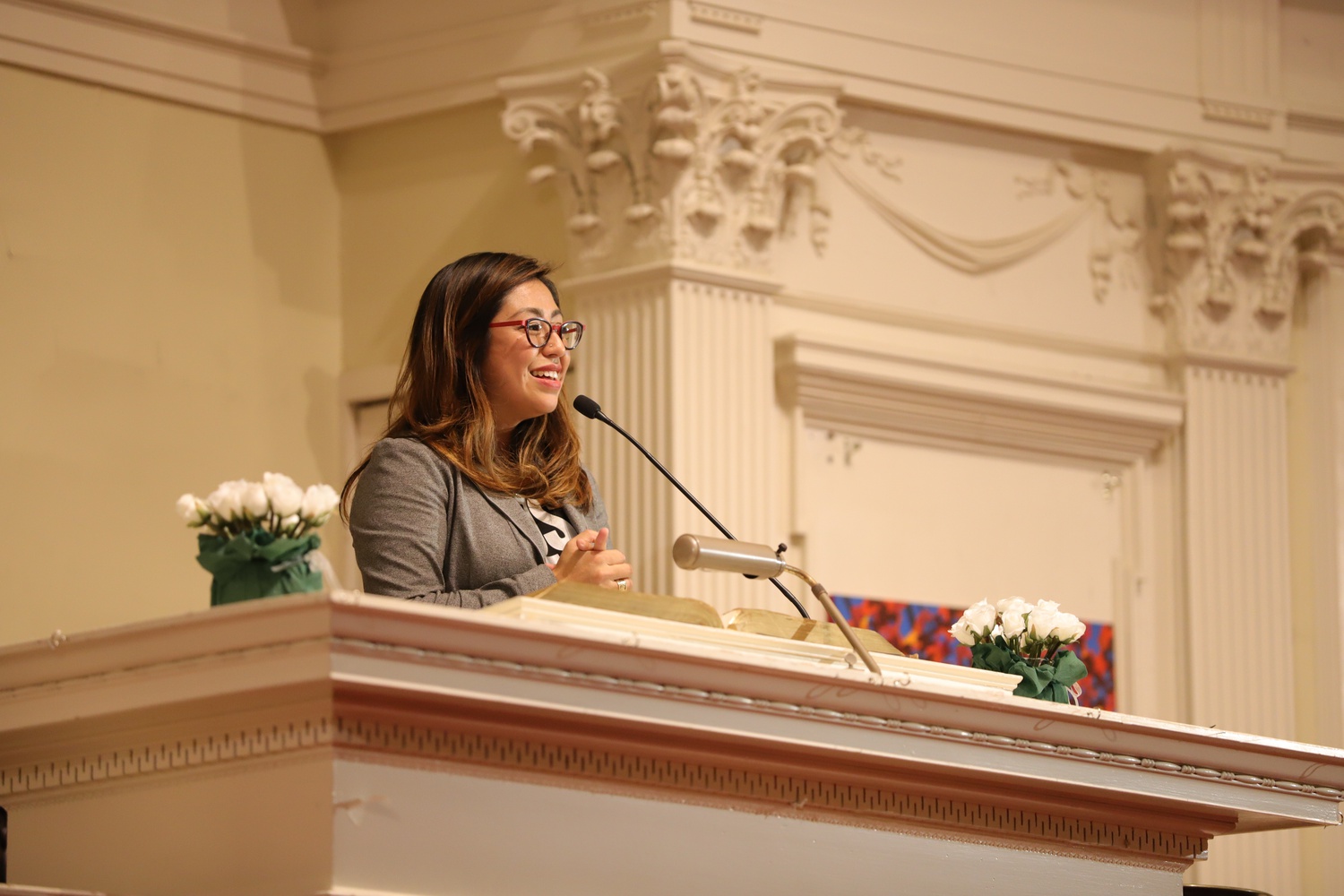 Immigrant rights advocate Cristina Jiménez recounted her story growing up in the United States as an undocumented immigrant and becoming an activist during a Phillips Brooks House Association event honoring her Friday night.

Jiménez received the 13th annual Robert Coles “Call of Service” Award at First Parish Church in Cambridge for co-founding United We Dream, an advocacy group for young immigrants. The organization is among the largest youth-led immigrant advocacy groups in the country, with more than 400,000 members. United We Dream has worked to pass significant legislative protections for undocumented immigrants in the U.S., like the Obama-era Deferred Action for Childhood Arrivals program.

Harvard Dean of Undergraduate Education Amanda Claybaugh presented the award to Jiménez, noting that she was one of Time Magazine’s 2018 Top 100 Most Influential People and has held a MacArthur Fellowship.

In her speech, Jiménez recounted traveling from Quito, Ecuador to New York City. She described being told in high school that she could not attend college because she was undocumented. She ultimately graduated from Queens College and Baruch College. She also told the story of her younger brother being racially profiled and assaulted by a police officer.

“I share this experience and the stories of my family because they are the lived experiences of many people in this country and around the world,” Jiménez said.

She also described United We Dream’s approach to activism throughout her speech, saying that the group has sought to center undocumented individuals’ voices becuase they understand more directly the challenges immigrants face and how they might be mitigated.

Jiménez’s speech was punctuated by cheers from the crowd. She interacted with the audience throughout, leading chants like “stand up, fight back.”

She also connected the immigrant rights movement with other social justice movements, such as advocacy against climate change and police brutality.

“Our struggles are linked and so is the liberation of our communities,” she said.

She also promoted an upcoming national student walkout on Nov. 8 ahead of the Supreme Court’s scheduled hearing on DACA Nov. 12. DACA allows undocumented children brought to the U.S. by their parents to live and work in the country. She encouraged all of Harvard to take part in a scheduled campus walkout on Nov. 11.

Event attendee Jennifer Luong ’23, whose parents are Vietnamese refugees, said that Jiménez’s speech resonated with her and helped her think about her adjustment to attending Harvard.

“Finding this space where people will have stories that are really similar to mine was a nice thing to find,” she said.

Professor emeritus Robert Coles ’50, for whom the award is named, was also present at the event. Coles, a child psychiatrist, has worked with PBHA for more than half a century.

Jiménez praised Coles’s work and noted the connections between their respective social justice efforts. She ended her lecture by stating the impact of telling stories and the importance of taking action.

“We're not just about to share our stories,” Jiménez said. “Yes, their stories are powerful, but we got to take action to make those dreams a reality.”