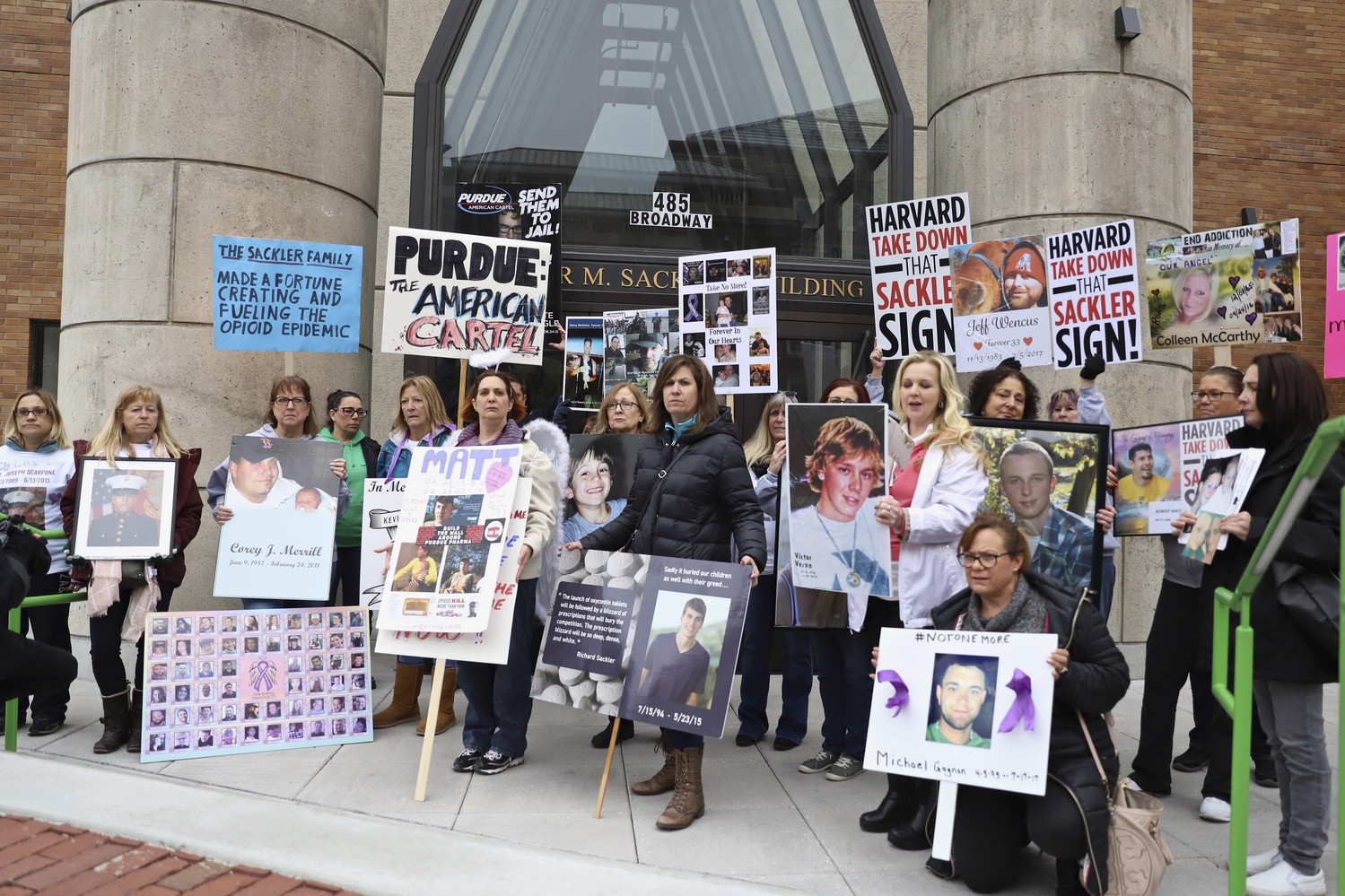 More than 30 students, faculty, and members of the public gathered at Harvard’s Arthur M. Sackler Building Friday to commemorate a new art installation honoring those affected by the opioid epidemic.

Three students in the History of Art and Architecture department created the installation, entitled “Remember Their Names,” as part of their final project for a departmental junior tutorial course. The students and their peers lined the building’s main staircase; each step bore the names of local victims or survivors of opioid abuse.

“‘Remember Their Names’ hopes to disrupt the overwhelming presence of the Sackler family within the building and invites the voices and perspectives of the people the Sacklers harmed the most,” according to the artists’ statement.

Kaitlin Hao ’21 — who spearheaded the project along with Wendy Yu ’21 and Samantha J. Meade ’21 — said their most immediate goal is to marshal support and funds to install a marble memorial plaque for victims in the lobby of the museum.

“In solemnity we record the complexity of the Sackler Legacy,” reads the mock-up of the plaque display at the Friday event. “We mourn and honour the voices silenced by the opioid epidemic.”

University President Lawrence S. Bacow has refused to take down the Sackler name from the museum or return donations from the family, calling such a move “inappropriate” in an interview Friday.

The organizers of Friday’s event called on the History of Art and Architecture department to “lobby to the fullest extent” to change the building’s name and publicly rebuke Bacow’s stance on the issue.

But they said that even absent such a change — which Hao acknowledged might prove legally unrealistic — featuring the epidemic’s victims in the space was a worthwhile step forward.

“We have the right to be able to have names and families and loved ones that have been affected being remembered,” Meade said.

Members of the Sackler family have served as executives at Purdue Pharma, the pharmaceutical company that produces the painkiller OxyContin, and have been accused of contributing to the opioid crisis. Arthur M. Sackler — who donated millions to Harvard in the 1980s to fund the museum’s construction — died before OxyContin came to market. But many activists nonetheless contend that he helped develop marketing tactics that Purdue would later use to sell OxyContin.

“This building is a monument to Arthur Sackler, a man who bears a name with indirect yet inextricable ties to the opioid epidemic currently sweeping the United States,” Hao said.

While multiple cultural institutions in the United States and Europe — including the Guggenheim Museum and the Louvre — had previously announced they would either remove the Sackler name from their walls or refuse any future donations from the family, Tufts was the first university to do so, a fact not lost on some attendees.

Multiple mothers of opioid victims in attendance Friday, including members of Team Sharing — a national organization that provides support to parents who lost children to substance abuse disorders — said they believe Tufts’s recent decision will increase pressure on Harvard to follow suit.

“I think it will give the University momentum to take the name down,” Team Sharing national board member Kathleen Scarpone said. “Shame on Harvard for not doing anything.”

Jillian Sackler, the widow of Arthur Sackler, wrote in an emailed statement that Arthur Sackler had nothing to do with OxyContin and did not profit from its sales.

"He did not profit from OxyContin, and none of his philanthropic gifts were in any way connected to opioids or to deceptive medical marketing – which he likewise had nothing to do with," she wrote. "It deeply saddens me to witness Arthur being associated for actions taken by his brothers and other OxySacklers.”

Activists have staged multiple protests, circulated an online petition, and engaged in a letter-writing campaign in the past year as part of their efforts to persuade Bacow to strip the Sackler name from campus. Local and national political figures, including Democratic presidential candidate and United States Senator Elizabeth Warren (D-Mass.), have supported the Harvard activists .

—Staff writer Juliet E. Isselbacher can be reached at juliet.isselbacher@thecrimson.com.